Pragya Singh Thakur too sick for court, not event 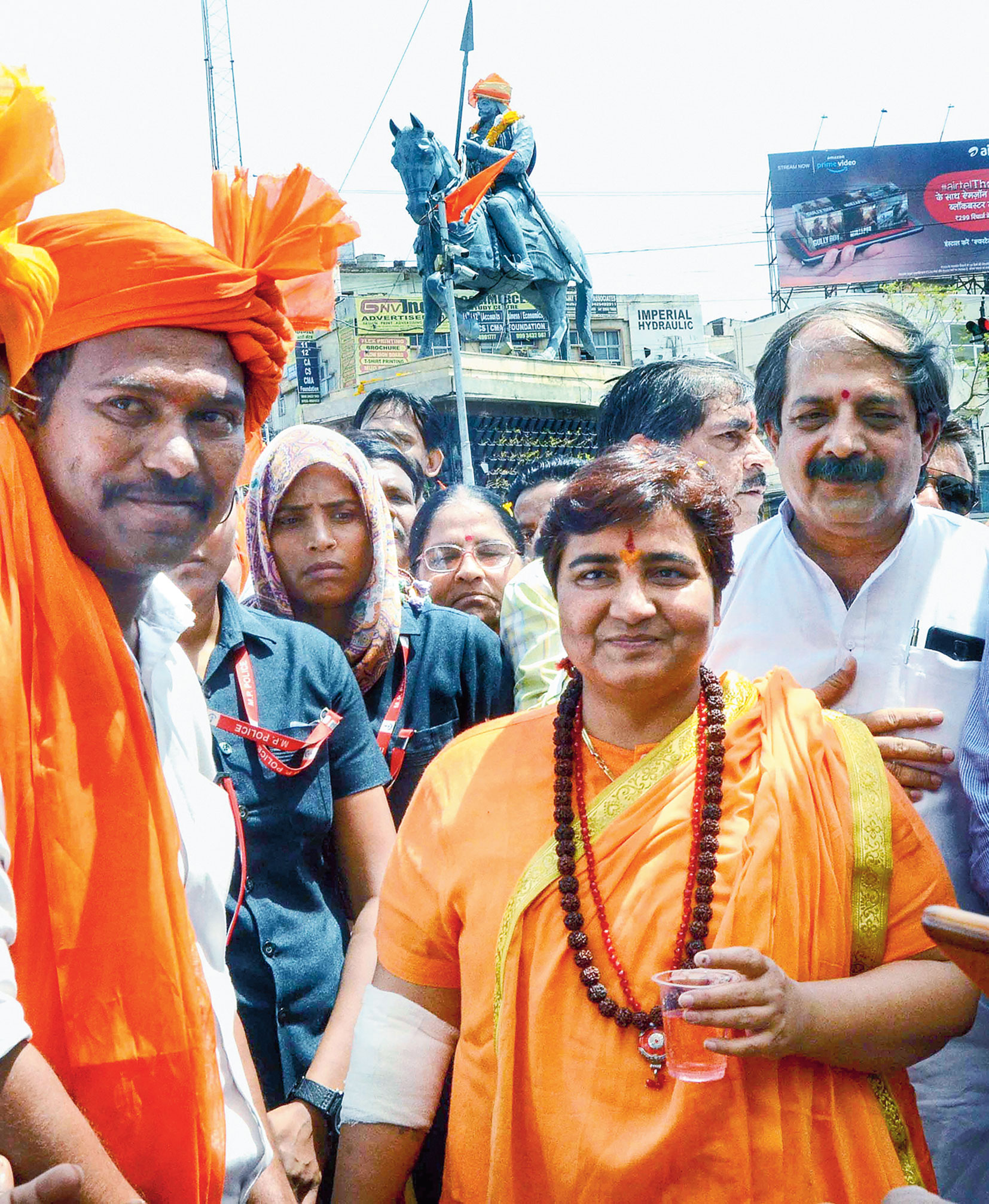 Pragya Singh Thakur after paying tributes before the statue of Maharana Pratap on his birth anniversary in Bhopal on Thursday.
(PTI)
PTI   |   Bhopal   |   Published 06.06.19, 09:10 PM

BJP parliamentarian Pragya Singh Thakur has failed to appear before a court in Mumbai for the second time this week in connection with the 2008 Malegaon blast case.

Her lawyer told the court on Thursday that she was suffering from high blood pressure and unable to travel from Bhopal to Mumbai.

Pragya was hospitalised for a stomach ailment in Bhopal on Wednesday night and discharged early on Thursday, her close aide Upma told PTI, adding the BJP MP would return to the hospital after attending an event in Bhopal.

Pragya, who had been directed to appear before the special court in Mumbai in the Malegaon blast case, now has just a day left to comply with the court directives.

“She (Pragya) is unwell. She was hospitalised last night for medication and is suffering from some stomach-related ailment. She was administered injectable medicines,” Upma said.

Shrikant Prasad Purohit, a lieutenant colonel accused in the Malegoan blast, outside the sessions court in Mumbai.
(PTI)

“She was discharged from the hospital this (Thursday) morning and is taking part in a programme on the request of (party) workers, but will return to the hospital immediately afterwards as she is not well,” Upma said.

On Monday, the special court had rejected the application of Thakur, who defeated Congress veteran Digvijaya Singh from Bhopal, for exemption from appearance in the court this week.

Pragya had sought the exemption for completing parliamentary formalities but the court said her presence was necessary at this stage in the case.

In May this year, the court, which is conducting a trial against seven accused, including Pragya, directed all of them to appear before it at least once a week.

As the hearing began on Thursday, Pragya’s lawyer Prashant Magoo submitted an application before NIA Judge V.S. Padalkar seeking exemption from her appearance in the court.

The court granted her exemption for the day and asked her to appear before it on Friday.

The accused are facing trial under various sections of the Unlawful Activities Prevention Act (UAPA) and the Indian Penal Code.

Sudhakar Dwivedi, another accused, also sought exemption from appearance, claiming that he has to attend a religious event in Jammu and Kashmir.

He has also cited inability to get a flight or train ticket to Mumbai before June 30 because of the “holiday season”.

Granting him exemption for the day, the court said, “Since the beginning of the trial, the accused (Dwivedi) has been seeking exemption on some ground or the other. It seems he is hell-bent to remain absent by engaging in some religious functions. Since he is facing the trial, it is his duty to be present in the court.”

“It is not the business of the court (to check) that the accused is getting ticket for travel or not. The grounds in the application are not reasonable and the accused needs to be present,” the judge said.