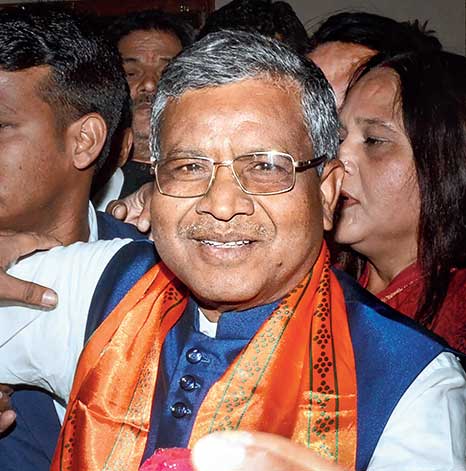 The return of Jharkhand tribal leader Babulal Marandi to the BJP fold is part of the leadership’s strategy to take corrective measures and consolidate relations with allies after a series of Assembly election defeats, sources said.

Apart from securing the return of leaders like Marandi, the BJP central leadership is also scouting for new partners, in an acknowledgement that it was not possible to win every election solely in the name of Narendra Modi, the sources said.

In the corridors of power there is talk of a cabinet shuffle or expansion. Sources in the BJP said ally JDU will be given representation in the Union cabinet and efforts are on to strike a relationship with a new party from a southern state.

The move to get the JDU in the central government is aimed at cementing relations with the Bihar ally ahead of the year-end Assembly polls in the state. JDU chief Nitish Kumar had refused to join the Union government last year after his party was allotted only one berth.

In Andhra Pradesh, the BJP is hoping to win over the ruling party, the YSR Congress, led by chief minister Jaganmohan Reddy. The Chandrababu Naidu-led Telugu Desam Party had been part of the NDA before it broke away over the demand for special status for Andhra.

Prime Minister Modi recently had a long meeting with Jagan and BJP leaders said it could yield a positive outcome.

Apart from cementing ties with allies, the BJP has also been jolted by the string of defeats to alter its strategy in the states. Welcoming Marandi into the BJP fold and projecting him as the face of the party in Jharkhand is being seen as a significant shift in the BJP’s electoral strategy.

Post-2014, the BJP had adopted the strategy of isolating dominant castes or groups and getting all other sections to consolidate behind the party. In Jharkhand, the party had installed non-tribal leader Raghubar Das as chief minister. This seems to have backfired in the recent Assembly election.

“The return of Babulal Marandi is a big gain for us. It will help us regain our support among the tribals,” a BJP leader said. “Our move to go with a non-tribal face and take the tribals for granted was wrong,” the leader added.

In Haryana too, the BJP was forced to strike a post-election deal with a party representing the dominant Jats. After failing to get majority in the Haryana election last October, the BJP had to tie up with the fledgling Jannayak Janta Party of Dushyant Chautala and make him deputy chief minister.

The BJP had gone with the strategy of projecting Manohar Lal Khattar, a non-Jat, as its chief ministerial face. The gamble had paid dividends in 2014, when other communities had united against the dominant Jats, but it failed in 2019.

“For the Lok Sabha polls we have Modiji but in the states we have to adopt a different strategy and tie up with regional outfits wherever necessary. Modiji can’t win us each and every election,” a BJP leader said.