Chief election commissioner Om Prakash Rawat on Saturday ruled out the possibility of bringing back ballot papers and defended electronic voting machines, calling the EVMs a "good scapegoat" before defending the poll panel against allegations of bias. 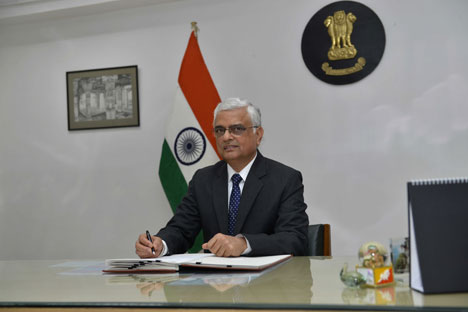 Calcutta: Chief election commissioner Om Prakash Rawat on Saturday ruled out the possibility of bringing back ballot papers and defended electronic voting machines, calling the EVMs a "good scapegoat" before defending the poll panel against allegations of bias.

Rawat, who was in Calcutta for an interactive session organised by the Merchants' Chamber of Commerce, asserted there was no plan to revert to the old system of paper ballots.

"Future elections conducted by the commission would be conducted with EVMs, along with VVPATs (Voter Verifiable Paper Audit Trail machines).... There is absolutely nothing wrong with the integrity of the system. Time and again, however, there are eruptions on this. Then we clarify the issue," Rawat said.

Opposition leaders, including Trinamul chief Mamata Banerjee and BSP boss Mayawati, have repeatedly demanded a return to ballot papers since the Uttar Pradesh Assembly elections last year, amid allegations that many EVMs had been tampered with.

"In every election, there is one winner and some losers. Those who lose can often not accept the results and look for a scapegoat.... Unfortunately, the EVM is a good scapegoat, since it cannot speak for itself," Rawat said.

EVM malfunctions had been reported from hundreds of booths in Monday's bypolls - including in Bengal's Maheshtala Assembly seat. The poll panel had cited heat as the reason for the machines conking out, but did not say what steps had been taken to prevent a repeat, especially if the Lok Sabha elections due next year stuck to the usual April-May timeline.

On Saturday, Rawat appeared to blame the glitches on "human error".

"There are occasional lapses, because of human error.... If a few polling personnel do not pay thorough attention during the training exercises... that distraction could cause the personnel to miss out on something technical. That can cause technical glitches," he said, after an address on "Electoral Integrity and Role of Money in Elections".

Rawat, in his address, underscored the commission's concerns over abuse of money, paid and fake news and abuse of social media to influence the outcome of elections.

The pan-India Opposition, including Bengal chief minister Mamata, has been alleging "misuse" of the commission by the BJP-led Centre, effectively questioning the constitutional body's impartiality.

Asked about these allegations, Rawat said: "To such frustrated comments, I can only say, get well soon."

On Thursday, Mamata had said the national Opposition should be prepared for polls in "five-six months".

Rawat sought to dispel such suggestions. Asked if the commission had received any suggestions from the Centre on bringing forward the parliamentary elections, Rawat said: "Let me state this for the record, absolutely not."

Rawat declined comment on the recent Bengal panchayat elections on the ground of "propriety".

The rural polls, conducted by the state election commission, were marred by widespread violence.

But he cited the example of Monday's bypoll in Maheshtala, South 24-Parganas, to say that the central poll panel was prepared to handle elections in Bengal. "We take note of potential challenges, such as violence and malpractice, in the way of conducting free, fair and peaceful elections to prepare better for future elections," he said.

Later in the day, sources said, Rawat underscored at a meeting with Bengal chief electoral officer Aariz Aftab and his team the importance of the commission's success in conducting peaceful elections in Maheshtala.

Rawat, according to the sources, said it could serve as a "model" for the Lok Sabha polls in Bengal.

Mamata, who has repeatedly expressed her displeasure with the commission's "excesses" in the state since the 2016 Assembly polls, had mocked the Maheshtala arrangements on Thursday.

She said central forces exceeded the number of voters, with bunkers and guns giving the constituency the look of a "war zone".