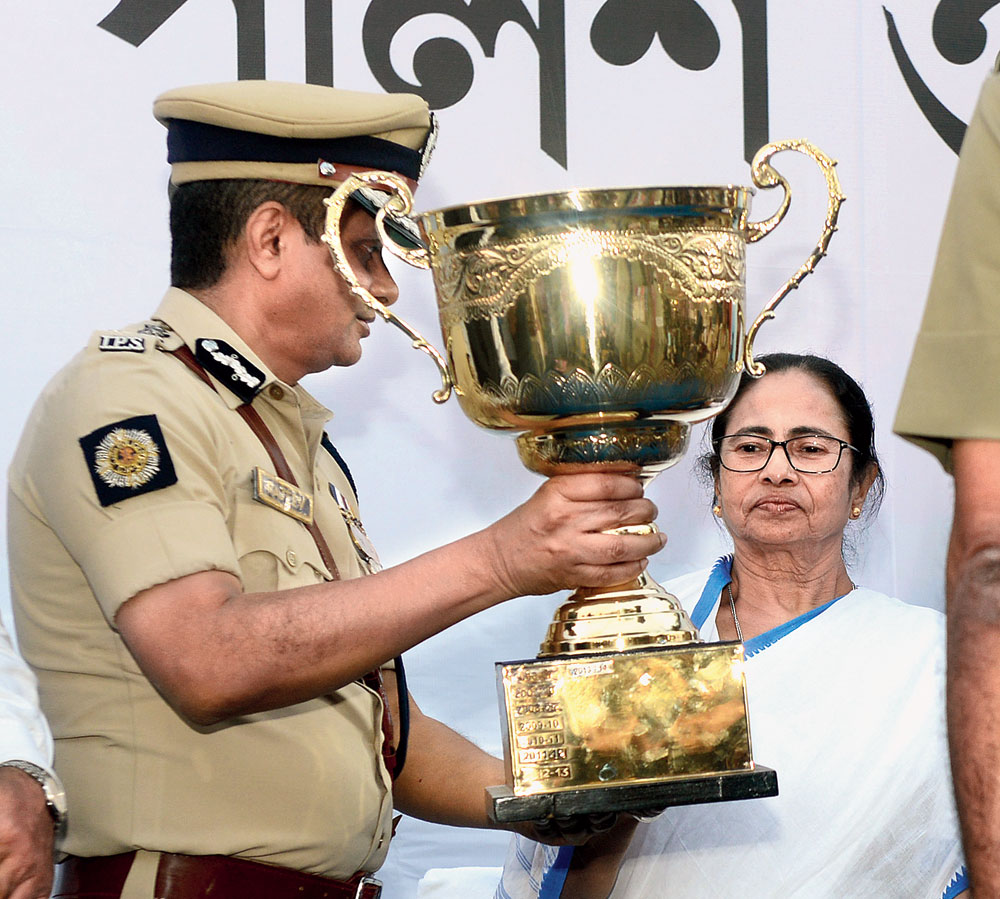 The Supreme Court has said the CBI has not yet produced documents that suggest Calcutta police commissioner Rajeev Kumar was destroying electronic evidence in the Saradha case — the purported reason for the overdrive by the central agency that has triggered a political crisis.

But the bench of Chief Justice Ranjan Gogoi and Justice Sanjiv Khanna warned that it would “come down heavily” on Kumar if the charge was later substantiated.

The court denied the CBI’s plea for an immediate hearing but will take up on Tuesday the CBI’s applications against the Bengal government and the police commissioner.

The CBI has sought contempt action against the Bengal government over Sunday’s treatment of an agency team that had reached Kumar’s residence to question him, and requested a direction to Kumar to “surrender” and “cooperate”.

“We have gone through your application. There is nothing in it remotely suggesting that you have apprehensions of evidence being destroyed,” Justice Gogoi told solicitor-general Tushar Mehta, appearing for the CBI, when he sought a hearing on Monday itself.

“If you had some material evidence that the commissioner of police was even remotely thinking of destroying evidence, we will come down so heavily on him, he will regret it,” the bench said.

When the court referred to the content of the CBI’s application, the solicitor-general said: “When we drafted the interim applications yesterday, we did not have our records. It was under the siege of the police. We got the records today (Monday) only.”

It was not clarified how the CBI got possession of the records overnight.

Mehta described Kumar as a “potential accused”, which is at odds with the CBI’s official claim that it wants to question the officer as a “witness”.

On Sunday evening, Calcutta police had detained the CBI team at a police station for over an hour, and temporarily cordoned off the agency complexes in the city and Salt Lake. Chief minister Mamata Banerjee soon began an indefinite dharna against the Centre’s alleged attempt to use the CBI to undermine the Constitution.

At the apex court on Monday, the CBI described the police action as “undemocratic hooliganism” that had created “an atmosphere of terror”, and claimed the Constitution “has ceased to apply” in Bengal.

As soon as the proceedings began, Mehta pleaded for an immediate hearing but Justice Gogoi said he would hear more urgent matters before considering the law officer’s plea. When his turn came, Mehta claimed an “extraordinary situation” had unfolded in Bengal.

“We had issued four summons to the police commissioner, who is a potential accused (but) he didn’t respond. We intimated the director-general of police that your officer is not cooperating. Thereafter our team went,” Mehta said.

“Our team was arrested and kept in a police station. FIRs are being registered against CBI officers…. Officers of uniformed services sitting on a dharna with political leaders is unheard of.”

Senior advocate Abhishek Manu Singhvi, appearing for the Bengal government, said the commissioner was not an accused.

Calcutta police have said that the CBI officers were detained, not arrested, and that no FIR has been registered. Several senior police officers, including Kumar and Bengal DGP Virendra, were seen beside Mamata on her dharna platform on Sunday night.

The CBI pleaded that it was only carrying out the Supreme Court’s May 9, 2014, directive to probe deposit-mobilisation scams in Bengal, including Saradha.

“After holding the 25 officers of the CBI as hostages in illegal confinement and after holding Shri Pankaj Shrivastava, joint director, CBI, and his family as hostage in his own house, together with surrounding the CBI office, Kolkata, an atmosphere of terror was created,” it said.

“The flagrant and shameless defiance of the Constitution and the authority of this hon’ble court was on full display in media channel who were showing this undemocratic hooliganism live.

“Some of the CBI officers, including lady officers, were manhandled by the West Bengal local police, were taken up, rounded up and illegally confined. The mobile phone of these officers were forcibly snatched… and the said CBI officials are kept in illegal confinement at Park Street police station.”

According to the local police, all the detainees, who had been taken to the Shakespeare Sarani police station, were released by 8.35pm. Shrivastava’s quarters are part of the CBI complex at Nizam Palace that the city police had cordoned off for a while.

“Considering the brutal force of the West Bengal local police who have surrounded his residence, Shri Pankaj Shrivastava, his wife and his daughter who were inside the house did not open the door. It is submitted that the said officer and his family went through intense trauma and humiliation at the hands of the local police,” the CBI said.

“The Constitution of India has ceased to apply to the state of West Bengal, rule of law has broken down and the writ and the judicial direction of this hon’ble court can’t be thrown to the winds by hooliganism of the local police force at the behest of the accused person.”