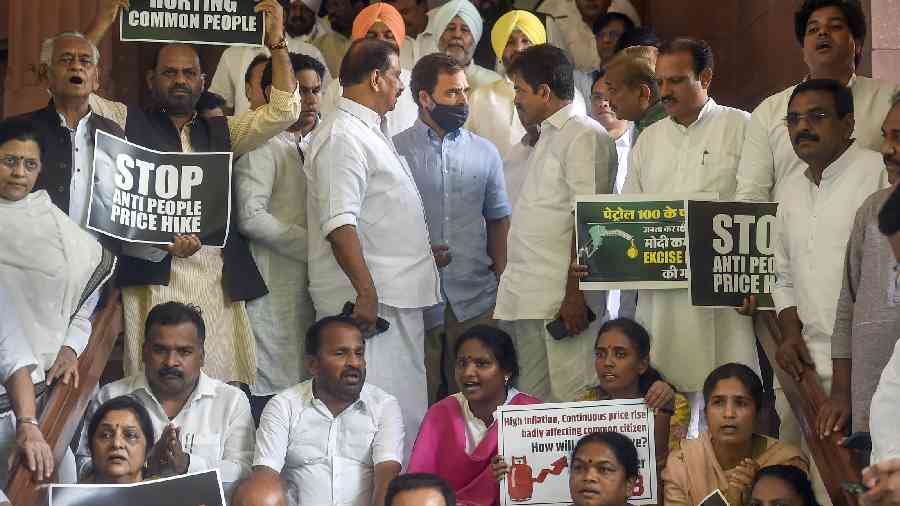 Congress MPs Rahul Gandhi, Shaktisinh Gohil and others stage a protest in Parliament on Wednesday against price hike, increase in GST on essential commodities and summoning of party president Sonia Gandhi by the ED in the National Herald case.
PTI
Sanjay K. Jha   |   New Delhi   |   Published 28.07.22, 02:46 AM

The police again bodily lifted protesting Congress MPs on Wednesday, with woman member S. Jothimani complaining her clothes were torn, as the party protested inside and outside Parliament about the misuse of central agencies and other issues.

Rahul Gandhi and Priyanka Gandhi Vadra posted tweets condemning the treatment of MPs “like criminals” and the “tearing (of) clothes of women MPs”, which took place a day after policemen had pulled Youth Congress chief B.V. Srinivas by his hair.

Elsewhere, as the ED questioned Sonia Gandhi for the third day, Rajasthan chief minister Ashok Gehlot accused the Narendra Modi government of creating “an atmosphere of terror in the country” through misuse of the Enforcement Directorate.

Veterans Ghulam Nabi Azad and Anand Sharma, architects of the G23 dissident group who too were fielded to criticise the ill-treatment of the 75-year-old Sonia, accused the government of “playing with her health” and weaponising laws to “target and harass political opponents”.

While arguing Sonia’s grilling was uncalled for and reflected a political vendetta, the Congress also protested against the government’s refusal to debate the price rise, unemployment and the Agnipath recruitment scheme.

Congress MPs walked out of the Parliament building towards Vijay Chowk and sat down on the lawns, and not on the road as they had done on Tuesday.

The MPs shouted slogans about the Prime Minister’s dictatorial attitude and said he must face up to people’s issues in Parliament and answer uncomfortable questions. Most of the placards they held up were about the price rise.

The police swiftly curtailed the protest, forcing the MPs into buses to be taken away, as they had on Tuesday. Some, including women MPs, were lifted and shoved into buses.

Jothimani, an MP from Tamil Nadu, said her clothes were torn. Many others too alleged the use of excessive force.

“People’s representatives who raise problems of people in Parliament are being treated like criminals. In fact, this is unparliamentary,” Rahul tweeted.

Priyanka said: “Mr Prime Minister, the MPs have been elected to raise the people’s issues. Price rise and unemployment are people’s questions. Tearing clothes of women MPs, dragging them on the road is cruelty of the worst form. You will have to listen to questions. Why are you so scared of questions?”

Familiar scenes were witnessed at the Congress headquarters, with the police using force to prevent party workers from stepping out.

Gehlot, referring to Sonia’s questioning, told a news conference: “The ED has been used to harass political opponents and critics and even to pull down governments. Maharashtra is the latest example where the government was changed with the help of the ED.”

“All the relevant documents (related to the National Herald case) are in the public domain, with the trial court, high court and the Supreme Court. There is no new development….”

Azad said Sonia had just come out of hospital. “When all the papers are with the agencies, where is the need to call her for questioning on technical matters which she would not know?” he said.