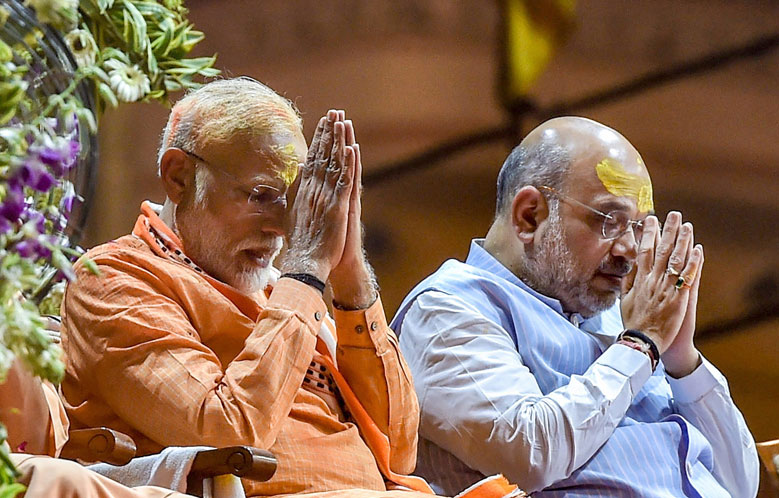 The Supreme Court will take up on Tuesday Congress MP Sushmita Dev’s plea for a directive to the Election Commission to take action against Prime Minister Narendra Modi and BJP chief Amit Shah for alleged violations of the model code of conduct.

A bench of Chief Justice Ranjan Gogoi and Justices Deepak Gupta and Sanjiv Khanna on Monday listed the matter for hearing on Tuesday following a request from senior advocate Abhishek Manu Singhvi that the matter needed urgent consideration.

Dev said “the Prime Minister and the party in power have for the past five years fostered and cultivated an atmosphere of communal tension for their petty political gains”.

“It was, therefore, unsurprising when he and the BJP president continued with this practice even after the MCC (the model code) was enforced,” the MP from Silchar, Assam, said in her petition filed through advocate Sunil Fernandes.

Dev, who heads the All India Mahila Congress, has cited over 4 0 alleged instances of violation by Modi and Shah, including references to the Pulwama attack, the Balakot air strikes and investigations during the previous (UPA) government into alleged activities of “Hindu terror” groups.

She said the Congress had complained several times to the Election Commission of India but the poll watchdog had failed to act against either Modi or Shah, although it was a “matter of record” that it had taken steps against other candidates “in breach of” electoral laws by banning them from campaigning for 48-72 hours.

“The lack of decision despite cogent evidences, representations and exhortations to the Respondent/ECI demonstrates abdication and indecision and a complete absence of justice in ensuring a level playing field in (the) … general elections for the Lok Sabha. The inactions, omissions and commissions by the Respondent/ECI are (a) … direct violation of Articles 14 (equality) and 21 (life and liberty) of the Constitution and which are impeding free, fair and unbiased general elections, 2019,” Dev’s petition contended.

“It is submitted that since March 10th 2019, i.e. the date on which (the) general elections 2019 were notified, the Prime Minister, Mr Narendra Modi, and the BJP president, Mr Amit Shah, … have ex-facie violated the provisions of the RP (Representation of the People) Act and the Election Rules and the process, thereof,” it added.

“It is in (the) public domain that they have indulged in hate speeches, repeatedly used the armed forces for political propaganda, despite a clear prohibition on the same by the Respondent/ECI.”

The petition said the poll panel had failed to act despite a complaint that the Prime Minister held a road show in violation of electoral laws and without any permission after casting his vote in Gandhinagar, Gujarat, on April 23. Canvassing in constituencies on polling day is banned under election laws.

“Such brazen violations are neither minor nor procedural, in any manner…. However, the respondents are guarded and oblivious to the comprehensive representations/complaints… that have been filed by the petitioner’s party against the Prime Minister and Mr Amit Shah.”

The plea said the “inaction” was a sign of “invidious discrimination” and was “arbitrary, capricious and impermissible”.

Apart from a clear infraction of the petitioner’s fundamental rights under Articles 14 and 21, it was also “ex-facie destructive of the integrity of the electoral process, whereby certain selected very powerful individuals have been permitted to gain an unfair electoral advantage”, the Congress leader complained.

The petition said the alleged statements by Modi and Shah amounted to clear attempts to pollute and destroy the political discourse and influence the outcome of the election through unfair means.

It was, therefore, urging the court to direct the Election Commission “to expeditiously take action on (the) multiple representations/complaints pending before the ECI” against Modi and Shah, the plea said.