Advertisement
Home / India / Pilot back after suspense and tape 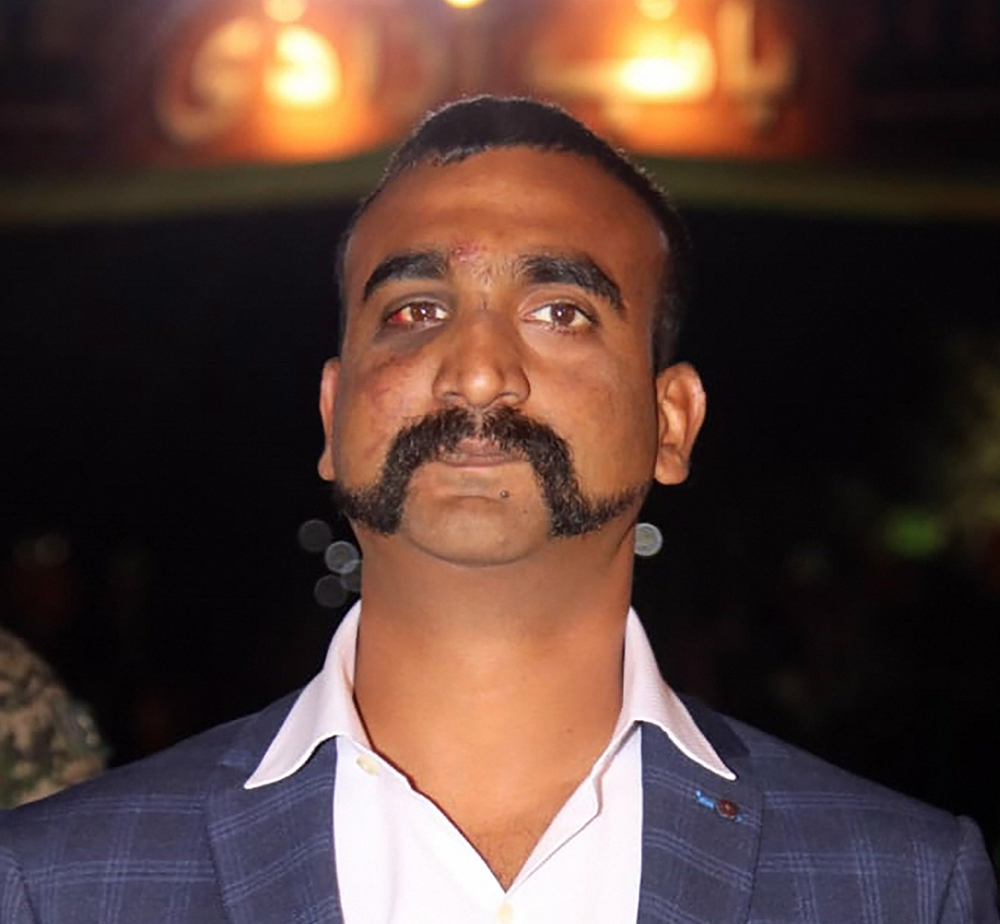 Wing Commander Abhinandan Varthaman returned home through the Wagah-Attari border foot crossing at 9.25pm on Friday, ending a daylong wait filled with suspense and speculation over the delay.

The first images of the freed Indian Air Force pilot, walking in soldierly style wearing civilian clothes, were beamed live by Pakistani television channels as he arrived at the Wagah exit point with the defence attaché at the Indian high commission, Group Captain Joy Thomas Kurien.

After the last bit of paperwork, the gate was opened and he walked out alone, to be immediately whisked away by BSF officials.

Five minutes later, Indian channels providing live coverage of the vigil at Attari since early afternoon showed an Indian Air Force motorcade speed towards Amritsar airport, from where Abhinandan was flown to Delhi.

In the only official readout, Air Vice-Marshal R.G.K. Kapoor said: “Wing Commander Abhinandan has just been handed over to us. As per standard operating procedure of the Indian Air Force, he will now be taken for a detailed medical check-up. This medical check-up is mandated particularly because the officer has had to eject from an aeroplane, which would have put his entire body under great stress. (The) IAF is happy to have Abhinandan back.”

Just before Abhinandan’s release, Pakistani channels showed an 84-second video in which the pilot narrates how he ended up on the Pakistani side while lauding the Pakistani army and criticising the Indian media. The video was clearly edited and meant as a propaganda tool.

In it, Abhinandan says in Hindi: “I was searching for the target when your (Pakistan’s) air force shot me down.” This is being projected in Pakistan as evidence that he did not shoot down an F-16, as claimed by India that has shown parts of a missile and photographs as evidence.

Detailing how he had given up his pistol on seeing an agitated crowd, the pilot says Pakistani army officials saved him, administered first aid, and took him to a hospital for a medical examination and further treatment. “The Pakistani army is a very professional service,’’ he says, before adding in English: “I see peace in it. I have spent time with the Pakistani army. I am very impressed.’’

He accuses the Indian media of hype. “The smallest of things are presented in a very incendiary manner and people get misled,” he says in the video, which is cut off abruptly.

Although neither side explained why the handover took so long after Prime Minister Khan announced Abhinandan’s release as a “peace gesture”, sources said that Pakistan was keen to have the media present during the event.

Wary of the handover turning into a media circus and allowing Pakistan a chance at propaganda, Indian mission officials are said to have cited international norms to avoid this course.

A former Indian high commissioner to Pakistan, Sharat Sabharwal, told The Telegraph that Pakistan had made a similar demand while releasing Flt Lt K. Nachiketa, who was shot down during the Kargil War in 1999.

At that time, too, Pakistan had wanted a handover at the foreign office in front of the media. Then Indian high commissioner G. Parthasarathy had put his foot down, after which Pakistan handed him over to the International Committee of the Red Cross, which brought him to the mission after a medical check-up.

Reports from Pakistan suggested that Islamabad wanted the handover to coincide with the daily retreat at Wagah-Attari in the evening, when people gather on both sides of the border crossing to watch the closing of the gates. India opposed this, too, and the BSF cancelled the retreat on the Indian side.

Some sources attributed the delay to paperwork but diplomatic sources said this shouldn’t have taken so much time since Abhinandan’s credentials were undisputed and the Indian mission would have had emergency exit papers ready for him.

On cue, defence minister Nirmala Sitharaman, who had not been heard during the past four days of heightened tension, tweeted: “Proud of you Wing Commander #AbhinandanVarthaman. The entire nation appreciates your valour and grit. You held your calm in the face of adversity. You are an inspiration to our youth. Salute. Vande Mataram.”

Soon after Abhinandan had crossed into India, the Pakistani foreign office said: “The captured Indian Air Force Wing Commander Abhinandan Varthaman has been returned to India today. He was arrested when his military jet MIG-21 crashed… after being shot down by Pakistan Air Force for violating Pakistani airspace on February 27, 2019.

“While in captivity, he was treated with dignity and in line with international law. Prime Minister of Pakistan Mr Imran Khan announced his return as a goodwill gesture aimed at de-escalating rising tensions with India.”