Opposition veers around to moving top court on tallying votes

Opposition parties insist on counting 50% of paper trail in elections 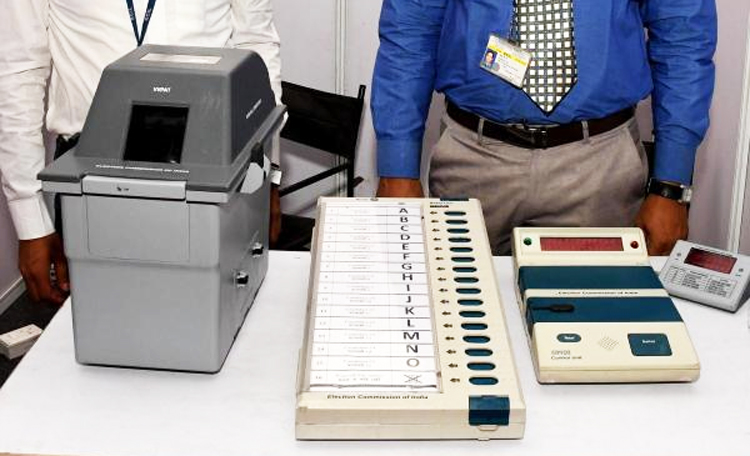 Opposition leaders told The Telegraph that they may move the Supreme Court this week as they have not got a favourable response to their demand for tallying half the paper trail with the votes counted in electronic voting machines (EVMs) in all future elections.

Since 2017, the Election Commission of India (EC) tallies votes counted in a single randomly selected Voter Verified Paper Audit Trail (VVPAT) machine with that of its corresponding Electronic Voting Machine (EVM), in every constituency. In case of a mismatch, the VVPAT count is considered only for the respective polling booth, and there is no cancellation of the result of the constituency.

Earlier this month, leaders of all main Opposition parties, including all national parties, except the BJP, asked the EC to tally half the paper trail with their respective EVMs and said that ideally, the EC should revert to paper ballots to remove “opaqueness in the electoral system.”

The EC responded to them saying it would obey court orders and a report expected shortly from the Indian Statistical Institute (ISI). The Supreme Court had rejected a Public Interest Litigaton (PIL), in November last year, to return to paper ballots.

Andhra Pradesh CM and Telugu Desam Party leader Chandrababu Naidu told party members in a teleconference earlier this month that at least 15 Opposition parties agreed in a meeting at NCP supremo Sharad Pawar’s home in Delhi on February 13 that they would move the apex court.

A source present at the meeting told this paper: “The Aam Aadmi Party prepared the PIL, and the task of circulating it and getting affidavits from leaders of the Opposition parties to endorse it was given to the TDP. Janata Dal Secular secretary general Danish Ali was the first signatory, and Samajawadi Party leader Akhilesh Yadav gave his affidavit to an emissary who visited Lucknow. Congress president Rahul Gandhi also signed, later.”

Ali told The Telegraph: “All parties that went to the EC to demand 50 per cent VVPAT count are petitioners in this PIL which should be filed soon.”

A source confirmed that the PIL is titled Rahul Gandhi and others versus Union of India and others. An EC official confirmed that a report on what is a statistically correct sample size to verify VVPAT’s is being prepared by an expert committee including Ajay G. Bhatt, director of the Indian Statistical Institute, Delhi Centre; Rajeeva L. Karandikar, director Chennai Mathematical Institute, and Onkar Prosad Ghosh, deputy director general of the Central Statistical Organisation.

Ghosh was included in December on the request of a group of retired bureaucrats who are also demanding more VVPATs to be counted.

The group of 73 former officials, including former foreign secretaries Shivshankar Menon and Nirupama Rao, told the EC in an open letter on Monday that “no action” has been taken on deciding the sample size of VVPATs to be counted.

They wrote: “It is common knowledge that EVMs are ‘black boxes’ in which it is impossible for voters to verify whether their votes have been recorded and counted correctly, and in which miscounts due to EVM malfunction or manipulation are undetectable and unchallengeable…. If VVPAT is to have any real security or accuracy value, it should form the basis of a proper audit plan.”

The letter lists four “shortcomings” in the EC’s audit plan for VVPATs:

Before the Lok Sabha polls, they demanded that “full manual counting of VVPAT slips should be done (1) for all the remaining EVMs of the defined population if the sample throws up one or more defective EVMs, (2) for closely contested constituencies where the margin of victory is below 2 per cent of the votes cast or 1000 votes, whichever is less, even if no defective EVM turns up in the sample, and (3) for those polling stations where the discrepancy between the votes polled in EVMs and votes as counted in EVMs is more than 2 per cent.”

Former information technology secretary Kamal Jaswal, a signatory, told this newspaper: “We began interacting with the EC in June last year, and we contested a report that one VVPAT per constituency is enough. The EC then included an external member in the Expert Committeee, but they have not met since October 4, and the last time the EC met us was November 30.”

A senior EC official told The Telegraph: “They (the retired bureaucrats) wanted an external member on the expert committee, which was granted by the EC. The report of the committee is awaited, and we cannot take any decision on this issue (of VVPAT sampling) without examining the final report. There is also a pending litigation filed in the Supreme Court by two retired bureaucrats who are part of the group that approached the EC on this issue last year. We will continue to respond in court, as and when required.”

Responding to the allegation that the committee has not met since October 4, an EC source said: “Members interact through a variety of media, such as email and WhatsApp. Work does not take place at meetings alone.”

Oops! Who let ‘dates’ out of the poll bag?