'The TMC and the BJP slammed the Left and the Congress, accusing them of surrendering before a 'communal force' like the ISF 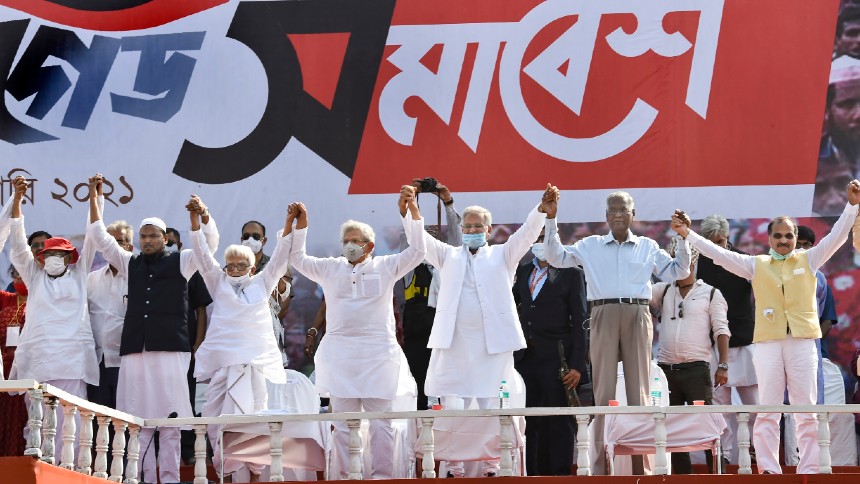 After a decade of losing power, the Left Front, in alliance with the Congress and the newly formed Indian Secular Front (ISF) on Sunday projected itself as a "third alternative force" in the emerging TMC versus BJP political binary in West Bengal, but chinks were evident in the nascent alliance.

The Left-Congress-ISF alliance kicked off its campaign for the upcoming assembly elections in West Bengal with a mega rally at the Brigade Parade Ground in Kolkata. 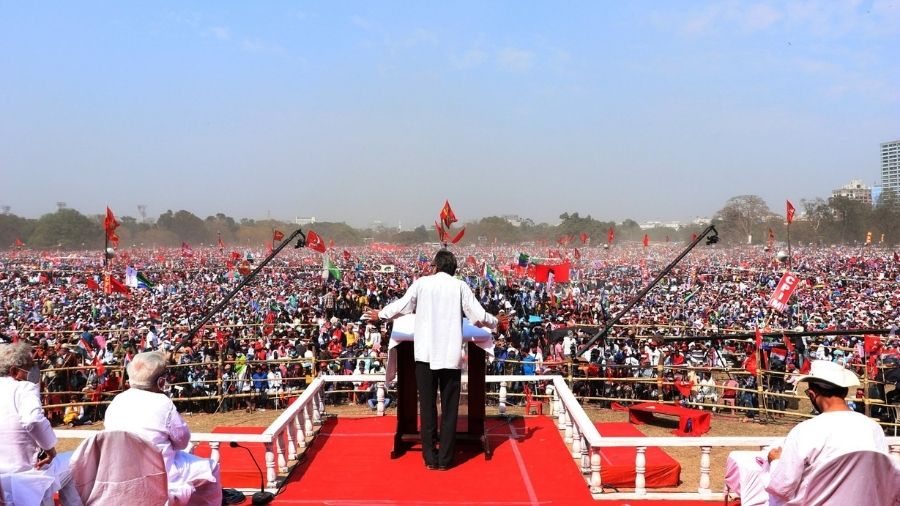 At the rally, leaders of the CPI(M)-headed Left Front called for "knocking out the communal TMC and BJP, and stressed the need for a third alternative to provide a "Janhit Sarkar" (people's welfare government) to ensure employment generation and usher in industrial development in the state.

State Congress president Adhir Chowdhury said that the grand alliance of the Left-Congress and other secular forces won't let the West Bengal assembly elections to be a two- cornered contest and would defeat both the ruling Trinamool Congress and the opposition BJP. 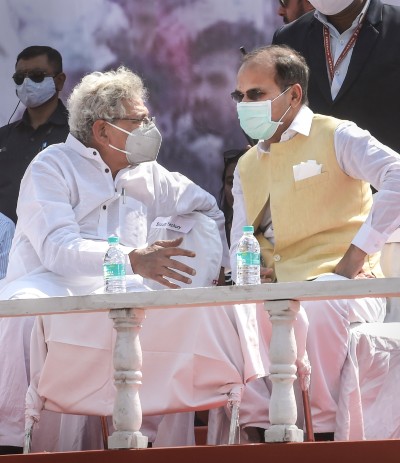 However, a discordant note was sounded by ISF chief Abbas Siddiqui who, unhappy with the progress of seat-sharing talks with the Congress, issued a veiled threat to the party.

Siddiqui vowed to defeat the TMC and the BJP and ensure that the Mamata Banerjee-led party becomes a "zero" after the assembly elections, but in a word of caution for the Congress, with which the party's talks are in choppy waters, said that the ISF is here to become a partner and get its rightful claims. 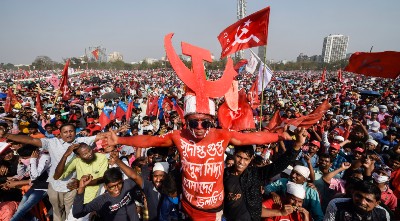 The TMC and the BJP slammed the Left and the Congress accusing them of surrendering before a "communal force" like the ISF.

Accusing the ruling TMC and the opposition BJP of dividing people on communal lines to serve their political interests, West Bengal CPI(M) secretary Surya Kanta Mishra said that the state needs a government that would work for its development and would not be a "copycat" of the TMC and the BJP.

"Both the TMC and the BJP are two sides of the same coin. They plan to divide people on communal lines and rule.

We have seen how TMC leaders are joining the BJP lock, stock and barrel.

Except for the chief minister and some other leaders, the rest have switched over to the BJP. Both the TMC and the BJP now stand unmasked. We, the Left along with the Congress, would provide an alternative to people," Mishra said. 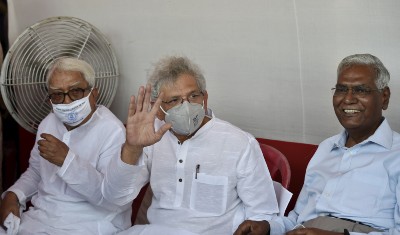 He said that the state needs a government that can take up industrialisation and generate employment for youths both in government and the private sectors.

CPI(M) general secretary Sitaram Yechury said that the Trinamool Congress has to be defeated first to stop the communal bandwagon of the RSS-BJP and claimed that the TMC might rejoin the NDA to form the government in West Bengal in case of a hung assembly.

"Many people ask me what we would do in case of a hung assembly. I tell them to direct their question to the TMC as they are in the best position to answer it.

In case of a hung assembly, I am confident that the TMC would join hands with the BJP to form the state's government," he said.

Terming the ongoing political tussle between the TMC and the BJP as a "mock fight", Yechury alleged that the saffron party is using money from the PM CARES fund, set up to fight the COVID-19 pandemic, to "buy" leaders during the time of elections.

"Our call is we want a Janhit Sarkar in Bengal for its overall development and protection of the rights of the masses," he said. 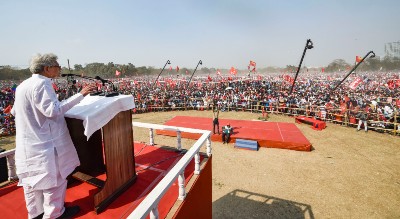 CPI(M) politburo member Mohammed Salim said that the grand alliance would give a "knock out" punch to the communal TMC and the BJP.

"We are fighting for changing the situation in Bengal, and some people are busy changing sides. Those who looted public money in chit fund scams are now switching parties. If we are voted to power, we will auction properties of corrupt leaders to return the looted money," he said. 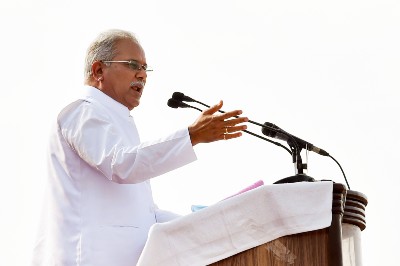 The Left Front ruled the state for 34 years since 1977 and its government was ousted by the TMC in 2011.

Addressing the rally, state Congress president Adhir Chowdhury asserted that the massive gathering proved that the election will not be a two-cornered contest.

"Morning is the harbinger of the day, and this meeting proves that both the TMC and the BJP will be defeated in the coming election. The goal of the grand alliance is to ensure the victory of secularism and democracy and to defeat communal and repressive politics in Bengal," he said.

"In Delhi, the BJP talks of getting rid of the opposition. In Bengal, the TMC talks of opposition free elections. The BJP and the TMC want that other than the two, there should not exist any other political force in Bengal and no other party should come between them, he said.

ISF president Siddiqui asserted that people of West Bengal would teach Chief Minister Mamata Banerjee "a lesson for her arrogance" and ensure that her party becomes politically insignificant after elections.

"We don't want appeasement. We want our rightful claims, just like any other citizen of this country. We too have equal rights," Siddiqui said.

The BJP often accuses the TMC of appeasing Muslims for vote bank politics. 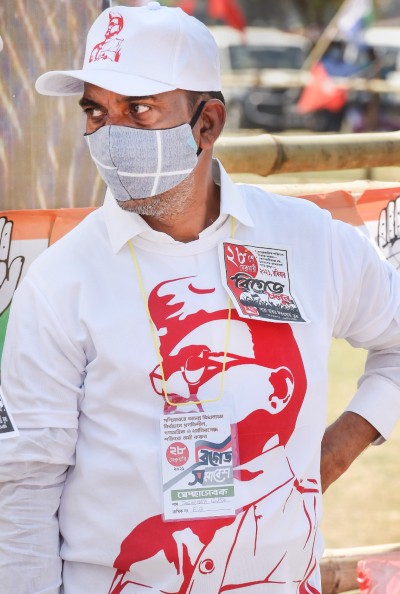 A supporter during the joint rally of Left, Congress and Indian Secular Front (ISF), ahead of West Bengal assembly polls, in Kolkata, Sunday
PTI

Expressing his gratitude for the West Bengal Left Front chairman Biman Bose for accommodating his fledgeling party in the grand alliance by sharing 30 seats, Siddiqui said that ISF activists and supporters will fight until the last to ensure the Left Front's victory and its allies in various parts of the state.

However, he said, "I didn't speak about the Congress. I am here (in politics) to be a partner, not for any kind of appeasement. I am here to get my rightful claims."

The ruling TMC and the opposition BJP slammed the Left's brigade rally and accused them of surrendering before a "communal force" like ISF.

The TMC claimed that the Left has surrendered before a communal force like the ISF.

"It is now proved that both the Left and the BJP are communal forces. The TMC is the only secular party," senior TMC leader Firhad Hakim said.

Alleging that the Brigade rally was sponsored by the TMC, BJP leaders said that both the Left and the Congress would fail to make their presence felt in the elections.

The Election Commission of India had on Friday announced an eight-phase poll in West Bengal, which will commence on March 27 and conclude on April 29. Counting will be held on May 2.