At least four trains are set on fire, two in Bihar, one in Uttar Pradesh and one in Telangana 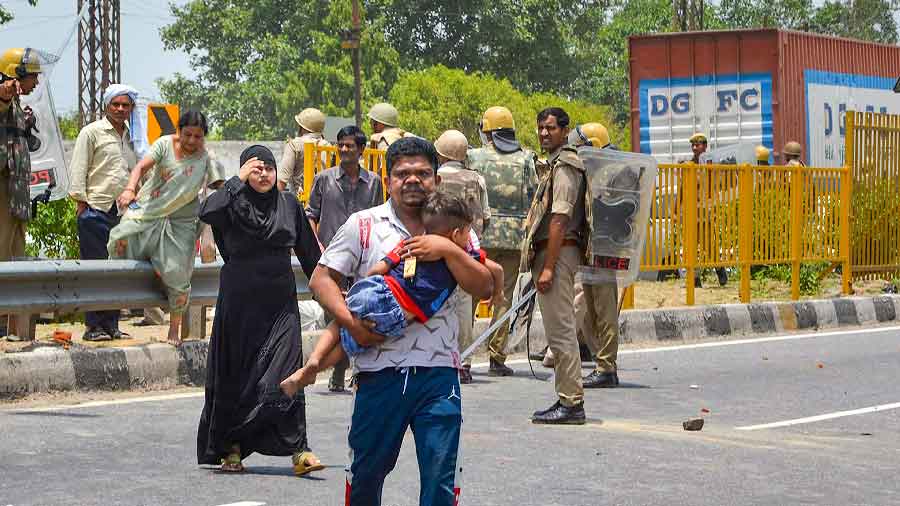 A man carrying his child and family head for a safer place during a clash between security personnel and people protesting against Centres Agnipath scheme, on Agra-Delhi National Highway in Mathura
PTI Picture
Our Bureau, PTI   |   Published 17.06.22, 06:05 PM

One person was killed in police firing in Secunderabad, the first casualty of protests against the Agnipath defence recruitment scheme that raged through several states for the third day on Friday with trains torched, public property vandalised and many thousands blocking tracks and highways.

As angry crowds, some armed with brickbats and stones, fanned out across large parts of India, from Uttar Pradesh to Telangana and Bihar to Madhya Pradesh, Union Home Minister Amit Shah and Army chief Gen Manoj Pande were among those who stepped in to assuage concerns.

The Army chief said the government's decision to raise the upper age limit to 23 years from 21 under the scheme in 2022 will provide an opportunity to youths who were preparing to join the force but couldn't in the last two years.

The Centre's decision to increase the upper age limit will benefit a large number of youth, Shah said. He added that the recruitment process in the Army had been affected for the last two years due to the Covid pandemic and Prime Minister Narendra Modi took a sensitive decision by showing concern for the youth of the country.

But the protests spread, seemingly uncontrolled, with crowds squatting on tracks and highways, pelting stones and vandalising public property to vent their anger resulting in losses worth many crores of rupees.

At least four trains were set on fire, two in Bihar, one in Uttar Pradesh and one in Telangana.

In Bihar, where generations of youth train for years to get into the defence forces like in many other places, angry aspirants set fire to bogies of the New Delhi-Bhagalpur Vikramshila Express in Lakhisarai and the New Delhi-Darbhanga Bihar Sampark Kranti Express in Samastipur.

At the Lakhisarai station, people lay down on the tracks to block the movement of trains and were dispersed by the railway and local police.

A mob attacked the home of BJP leader and Deputy Chief Minister Renu Devi in Patna.

In Secunderabad, a parcel coach of a passenger train was set ablaze by a crowd of about 300-350.

One person was fatally injured when police fired in the air to disperse protesters on the rampage at the Secunderabad station.

Confirming the death, a senior official of the South Central Railway told PTI the firing was done by Railway Protection Force (RPF).

The injured are being treated in the state-run Gandhi Hospital.

There was mayhem with people running helter-skelter and shops in the vicinity hurriedly downing shutters.

The scenes of chaos over the defence recruitment scheme that touched an emotive chord in thousands of youth and led to rail and road traffic being disrupted were mirrored elsewhere in the country. In Uttar Pradesh's Ballia town, youths raised slogans such as Bharat Mata ki Jai and Agnipath Vapas Lo and set an empty train on fire and vandalised a few other trains, prompting police to lathicharge them.

Protests also erupted in Varanasi, Firozabad and Amethi, causing damage to government buses and other symbols of public property.

The fight against the government scheme escalated in Haryana with youths burning tyres and several others squatting on rail tracks in Narwana and blocking the Jind-Bathinda track, officials said.

Following the violent protests in Palwal, the Haryana government has suspended mobile internet and SMS services for 24 hours in Ballabhgarh area of Faridabad district as a precautionary measure.

Police booked over 1,000 people for the violence on Thursday in Palwal district.

An official said verification and identification of all the accused from video clippings and CCTV footage was being done. He did not divulge further information.

The national capital was relatively quiet but Metro travel was disrupted with members of the Left-affiliated All India Students' Association staging demonstrations. The entry and exit gates of some Delhi Metro stations had to be closed.

The volatile agitation that spread like the proverbial wildfire saw politicians ranged against each other.

While the government defended the scheme, saying it will secure the future of youths and help maintain a youthful profile of the armed forces, opposition leaders maintained it would adversely impact the functioning of the armed forces.

Congress leader Rahul Gandhi cited schemes such as GST, noteban, farm laws and now Agnipath and said they were projected to be for the welfare of the people but were rejected by the citizens.

"The prime minister does not understand what the people of the country want, as he cannot hear anything except the voice of his 'friends'," Gandhi said in a tweet in Hindi.

Unveiling the scheme on Tuesday, the government had said youngsters between the ages of 17-and-a-half and 21 years would be inducted for a four-year tenure, while 25 per cent of the recruits will be retained for regular service.

"Cognisant of the fact that it has not been possible to undertake the recruitment during the last two years, the government has decided that a one-time waiver shall be granted for the proposed recruitment cycle for 2022," according to a statement issued by the defence ministry.

On Thursday night, it raised the upper age limit for recruitment under the 'Agnipath' scheme to 23 years from 21 for 2022 as the protests against the new model for enrolment of soldiers into the three services spread.