Environment consultant appointed to assess the impact of the blowout in a well, from which gas is flowing uncontrollably since May 27 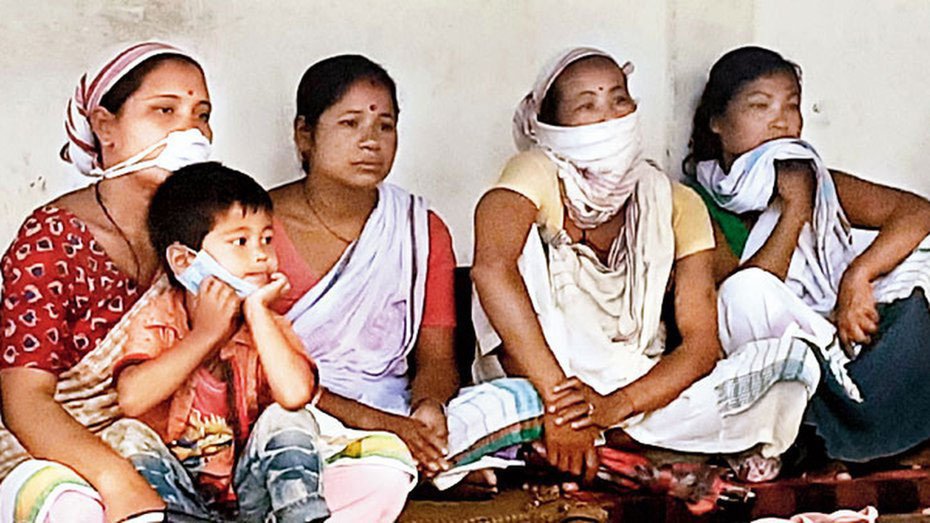 The Tinsukia district administration on Sunday ordered a magisterial enquiry into the reported death of five persons due to gas leakage from a well of Oil India Ltd (OIL) in Baghjan area of the state on account of a major blowout.

The PSU major said it has appointed an environment consultant to assess the impact of the blowout in a well, from which gas is flowing uncontrollably since May 27 on the Dibru-Saikhowa National Park and its nearby areas in the district.

'The District Magistrate has ordered a Magisterial Enquiry into the matter so as to ascertain the exact cause of death of the expired persons and further details will be revealed in due course of time,' an official release said.

The district administration has taken note of the reports in some media alleging five people dying in the area due to gas emission from the well blowout, it added.

'However, as per preliminary investigations, it has been observed that one person suffering from TB since 2019 expired on June 4 at Srimanta Sankardev Hospital and Research Institute, Dibrugarh,' the statement said.

It said another person suffering from liver disease and undergoing treatment died at his residence on June 4, while a person with a history of epilepsy drowned on June 3.

'Another female person belonging to Natun Rangagarah village who got married to Dibrugarh district expired at Dibrugarh and not at her birthplace...and it has been reported that she has not visited her birthplace in recent times,' the release mentioned.

Due to seepage of crude, condensate and other chemicals from the Oil India Ltd (OIL) well in Baghjan of Tinsukia district, there have been reports of damage to the ecology of the area by the locals, environmentalists and various groups.

'To safeguard the environment, OIL has engaged a NABET accredited consultant to carry out Environment Impact Assessment study in and around Dibru-Saikhowa National Park, Maguri Motapung Beel and the surrounding villages,' the company said in a statement.

The study will be conducted to assess the effects of blowout on terrestrial and aquatic ecosystems, and socio- economic impact assessment in consultation with the stakeholders, it added.

'OIL has engaged TERI for bio-remediation for impact of blowout on environment and site assessment was carried out jointly by officials from TERI and OIL on June 6, 2020,' the statement said.

Further, the company engaged local fishermen with boats to identify oil spill, if any, in Maguri Motapung Beel wetland so that immediate remedial action may be taken up as required.

Earlier, pictures of carcasses of a river dolphin and some dead fishes in Maguri Motapung Beel, which is adjacent to Dibru-Saikhowa National Park and about 1.5 km from the incident site, went viral on social media.

Following this, the Assam Forest Department had issued a notice to OIL on May 29 seeking details of the incident.

On May 27, a major blowout took place at a producing gas well of OIL at Baghjan, next to Dibru-Saikhowa National Park, forcing the administration to evacuate thousands of people living nearby due to sprouting of natural gas and condensate droplets.

OIL said the 'well is flowing gas uncontrollably' even as all attempts to control it have been hampered due to bad weather conditions in the area.

Meanwhile, OIL said the arrival of the three experts from the Singapore-based Alert Disaster Control has been delayed due to formalities related to COVID-19 pandemic.

'Three experts of Singapore based firm Alert Disaster Control will reach Duliajan late evening on June 7. The delay in their arrival is due to clearances of official formalities at Singapore. The team will supplement the OIL and ONGC team in executing the control of the blowout,' it added.

Informing the status of repair works, OIL said with very limited space and non-availability of open space above the wellhead, placement of Blow Out Preventer (BOP) has become a huge challenge as it entails huge risk.

'It is planned to place the BOP on the wellhead through a hydraulically driven mechanical transporter. Safety of the people and the surroundings has been considered utmost priority while controlling the well,' the company said.

In order to subdue or kill the well, drilling mud will have to be pumped immediately after capping the well by the BOP and the preparation of requisite well killing mud is underway.

'Huge quantities of water will be required while executing the actual operation of the well... A water reservoir near the well site plinth has been made and preparation of the area for placement of two 2,500 gallons capacity pumps is in progress.

'But due to wind direction and inclement weather conditions, the level of gas concentration is above the safe limit of operation in that area. The Crisis Management Team decided to shift the water reservoir to an alternate area in opposite direction of the present reservoir for safety reasons,' OIL said.

Because of this, a new pipeline is now required to be laid to the well plinth, but due to heavy rain for the last couple of days, the area needs a huge amount of civil works to make it ready.