Yoga remains a 'ray of hope' amid global fight against Covid, says Modi

PM announces launch of M-Yoga, an app developed in collaboration with WHO that has knowhow and videos 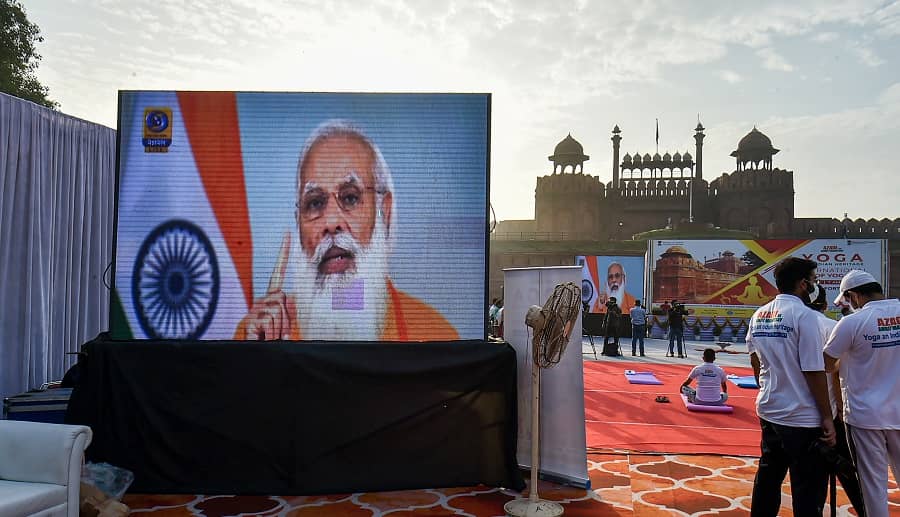 Prime Minister Narendra Modi on Monday said yoga remains a "ray of hope" as the world fights the coronavirus pandemic and asserted that in these difficult times it has become a source of inner strength.

Addressing the 7th International Yoga Day programme, Modi also said that in collaboration with the World Health Organization (WHO), India had taken another important step and now the world was going to get the power of M-Yoga application, which will have many videos of yoga training based on Common Yoga Protocol available in different languages of the world.

“This will help us in making the 'One World, One Health' motto successful,” he said.

"At a time when the whole world is fighting the coronavirus pandemic, yoga remains a ray of hope," Modi said.

The prime minister noted that there may not have been any major public events in countries around the world and in India for around a year and a half, but the enthusiasm for Yoga Day has not diminished.

For most of the countries of the world, Yoga Day is not their age-old cultural festival and in this difficult time, people could have forgotten about it and ignored it, but on the contrary, people's enthusiasm for yoga has increased, he said.

"When the unseen coronavirus knocked on the doors of the world, no country was prepared for it in terms of resources, capability and mental state. We all have seen that in such difficult times, yoga has become a great source of inner strength," he said.

Yoga shows us the way from stress to strength and from negativity to creativity, he asserted.

Modi noted that the medical science focuses as much on "healing" as on treatment, and said yoga plays a role in healing.

"Yoga not only focuses on physical health but also mental health. During Covid, several studies are going on, researching the benefits of yoga on our body and immunity. We see that yoga and breathing exercises are being done at the beginning of online classes. This is helping children in fighting the virus," PM Modi said.

Many schools now begin their online classes with yogic exercises like pranayam, he said, adding that this prepares children physically to deal with Covid.

The prime minister expressed confidence that yoga will continue playing its preventive, as well as promotive role in healthcare of masses.