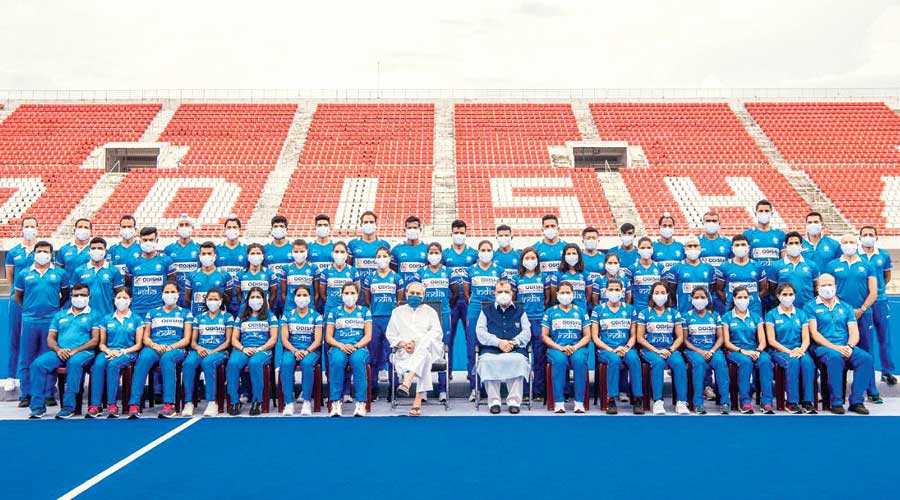 Odisha chief minister Naveen Patnaik on Tuesday announced that the state government will sponsor the men and women national hockey teams for another 10 years.

The chief minister made the announcement while felicitating members of Tokyo-returned men and women hockey teams at the state secretariat.

The teams have done the country proud with their performance at the Tokyo Olympics with the men’s team winning a bronze medal after 41 years and the women’s team reaching the semi-finals for the first time.

The Odisha government is the official sponsor of both the men and women’s national hockey teams. It has been sponsoring the Indian hockey teams since 2018 with the contract valid till 2023.

Now with the chief minister extending it for another 10 years it will run till 2033.

Sources said Odisha would spend more than Rs 200 crore on the sponsorship in the next 10 years.

Congratulating the teams for their effort to revive Indian hockey, Naveen said: “For nearly four decades, the hockey fans have been yearning to see India grab a medal at the Olympics. The way the entire country was glued to the TV screens to watch the hockey matches, it is quite evident there is something more to hockey than just sports.”

Stating that Odisha and hockey are destined to become synonymous, Naveen said: “We will continue our partnership with Hockey India. Odisha will support the Indian hockey teams for 10 more years. This will herald a new era of Indian Hockey and bring back the glory to the nation.”

“Odisha has played a major role and it’s because of its support, we are seeing the results today. We assure that the graph of the Hockey will not go down,” said Batra.

At the function at the state secretariat, all officials including private secretary to chief minister V.K. Pandian were present.

Hockey in India saw revival after the Odisha government came forward when Sahara India backed out in 2018 from sponsorship of the national teams.

The state had shot into international focus when it successfully organised the Men’s Hockey World Cup in Bhubaneswar in 2018.

It is going to host the Men’s Hockey World Cup in 2023 as well for the second consecutive time. Odisha is the only state of the country promoting the game in this manner.

“Hockey is in the heart of Odisha people and the love that Odisha has given is exemplary. Other states and institutions should learn what Odisha has done for the development of sport. Having been a hockey player himself Naveen Patnaik Sir understands the requirements of hockey players,” said Rampal.

Indian men’s team captain Manpreet Singh was also quite vocal in his appreciation of Odisha and the chief minister for their support to the game.

“It feels good to be back here in Odisha, the place we call our home away from home, and now one of the biggest reasons behind our success at the Tokyo Olympics 2020,” he said,

Earlier in the morning, both the teams were given a rousing reception when they reached Bhubaneswar with traditional dancers and conch blowers welcoming them.

People danced and cheered the teams all through their journey from the airport to the hotel where they were put up.