Twelve labourers were buried under the rubble while repairing a drain adjacent to the wall, say the police 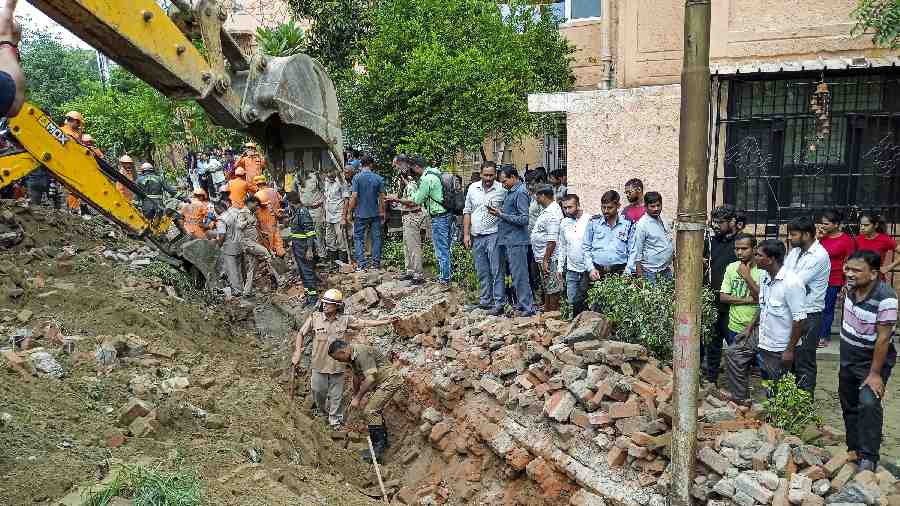 Amit dreamt of donning Army fatigues and was preparing for the next recruitment process, while pursuing his college education and also working as a labourer.

On Tuesday, those dreams came crashing down. The 18-year-old was the youngest of four labourers killed when the boundary wall of a housing society collapsed on them at Jal Vayu Vihar in Sector 21 here. "Twelve labourers were buried under the rubble while repairing a drain adjacent to the wall," police said.

Amit's uncle Vinod, who was also present at the spot, said he was his family's sole breadwinner.

"Amit's father is a farmer and his mother a housewife. He enrolled himself in a bachelor's programme in Ujhani area in the Badaun district of Uttar Pradesh two days ago and came here for work," Vinod said.

"He was passionate about the Army and was preparing for the upcoming recruitment. Running every morning was part of his routine," Vinod said.

"During the last recruitment process, he was two months short of eligibility and was planning for the next batch in six months," Vinod said.

Amit came to Noida for work to support his family and fund his education. His family is planning to fix his elder sister's marriage and that was also on his mind, Vinod added.

"I was also working at the spot when the incident happened. The contractors did not provide any safety gear," he said.

"A total of 12 labourers were pulled out of the rubble. Four of them died while others suffered injuries," Additional Deputy Commissioner of Police (Noida) Ashutosh Dwivedi told PTI.

Amit's family members are now travelling to the national capital to take his body to their native place for his funeral.

The other deceased have been identified as Pushpendra Singh (25) and Panna Lal (25) from Badaun and Dharam Veer from Sambhal district, the police said.

The injured was identified as Pappu Singh (25) of Badaun. He is undergoing treatment at the district hospital, they added.

Noida Authority CEO Ritu Maheshwari has ordered a joint investigation by the police, district administration and the Noida Authority. The police have detained a sub-contractor, Gul Mohammad, who supplied labourers for the job, an official said.