No date yet for postponed India-US talks, Nikki Haley says on Delhi visit

US Ambassador to the United Nations Nikki Haley said on Thursday that a top-level strategic dialogue with India will take place as soon as possible, after Washington put off the meeting for a second time in months. 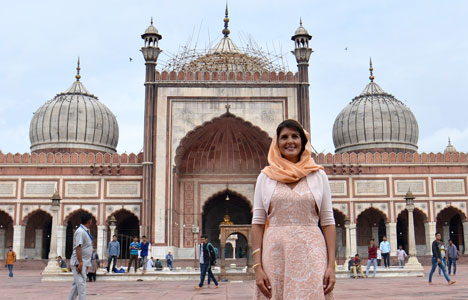 New Delhi, June 28 (Reuters): US Ambassador to the United Nations Nikki Haley said on Thursday that a top-level strategic dialogue with India will take place as soon as possible, after Washington put off the meeting for a second time in months.

The talks were expected to cover issues including US sanctions against Russia and Iran, arms sales and trade.

India and the United States have built close political and defence ties and US Secretary of State Mike Pompeo and Defense Secretary Jim Mattis were due to hold joint talks with their Indian counterparts in Washington on July 6.

But Pompeo called Indian Foreign Minister Sushma Swaraj on Wednesday night to say that the United States had to postpone the meeting because of unavoidable reasons, the Indian foreign ministry said.

The so-called two-plus-two talks are the highest level of dialogue between the United States and India and were agreed by US President Donald Trump and Indian Prime Minister Narendra Modi last year.

Haley, who is on a visit to New Delhi, told Reuters that the talks were a priority and would happen soon.

”It’s not just that it’s going to happen, they are now willing to come here if they need to or travel to make sure the two plus two happens. It is a priority. It’s something that needed to happen. It’s important,” she said.

No new dates have been announced.

The meeting was originally planned for April but that had to be put off because Trump fired Secretary of State Rex Tillerson the previous month and Pompeo went through confirmation hearings before the US Congress.

Among the issues on the agenda for next week's talks were arms sales including the transfer of Sea Guardian surveillance drones to the Indian navy, the first such sale of unmanned aircraft.

Indian officials also planned to discuss the issue of sweeping US sanctions on Russia under which any country engaged with its defence and intelligence sectors could face secondary US sanctions.

The US move has threatened a proposed $6 billion air defence missile deal that India is negotiating with Russia to help it counter the ballistic missiles and stealth aircraft that China is developing.

Haley, a member of Trump's cabinet, said the postponement of the meeting in Washington had nothing to do with any policy issues.

Haley is the first Indian-American to serve in a Cabinet-level position in any US presidential administration.

“The meeting is being discussed right now and being rescheduled as soon as possible. It was a situation that could’nt be avoided and it will come out publicly in the next few days,”?she said.

Trade differences between the United States and India are also increasing. Last week, New Delhi raised duties on US farm products in retaliation against Trump's tariff hikes on steel and aluminium.

Haley on Thursday visited a temple, mosque, gurdwara and church here, a day after she said freedom of religion was as important as freedom of people.

On her first visit to India after becoming the US envoy to UN, Haley visited the Gauri Shankar Mandir, Jama Masjid, Gurudwara Sis Ganj Sahib and Central Baptist Church on Thursday morning.

Haley, who is the daughter of Sikh immigrants from Punjab, also prepared rotis for langar at the gurudwara.

Haley had on Wednesday called on Prime Minister Narendra Modi and discussed ways to enhance India-US cooperation in various fields, including counter-terrorism.

She had also met External Affairs Minister Sushma Swaraj and discussed ways to deepen the Indo-US strategic partnership and the ongoing cooperation between the two countries at the UN.

The US envoy to the UN also met Nobel Peace Laureate Kailash Satyarthi on Wednesday and reiterated America's commitment to end child trafficking.