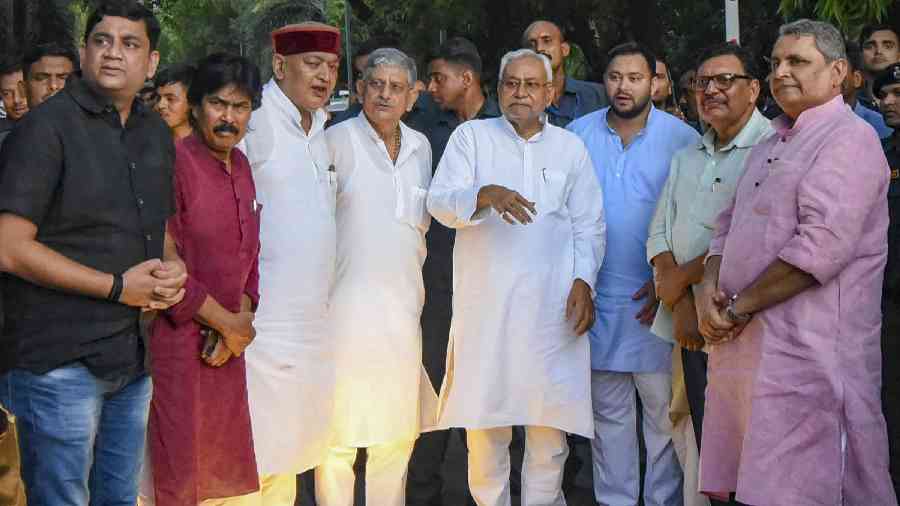 The scoreboard in this round of the national state of play now reads 1-1. The BJP came from behind to grab Maharashtra; it watched itself being cast aside with unlikely ease in Bihar on Tuesday.

In the context of Bihar, though, the scoreline is rather different: it is 8-0 for Nitish Kumar, a record unlikely to be matched, if not for the number of times he has done it, for the chicanery and chutzpah such accomplishment has required.

Bihar has been ruled by multiple turns of ideologically contrarian regimes since Nitish took power in 2005; barring one short spell gifted away by him to Jitan Ram Manjhi in 2014, Nitish has helmed all.

On Wednesday, he will become the arrowhead of re-arranged arithmetic in the Bihar Assembly and a realigned executive whose deputy will be, once again, Tejashwi Prasad Yadav, younger son of the fabled foe-and-friend of his political life, Lalu Prasad.

It could perhaps also be reasonably said that the chief minister of Bihar has redefined politics as the art of the impossible.

Who would have thought he would sunder ties with the BJP and shake hands with Lalu Prasad, his bitterest foe, in 2015?

Who would have thought he would desert Lalu in the course of a dark, inexplicable turn of events in 2017 and embrace Narendra Modi, whose very mention was anathema to him?

Who would have thought he would forsake the BJP and make a U to the RJD once again?

Who would have thought the RJD (and the Congress and the Left) would even find his embrace acceptable?

But there’s Nitish Kumar for you, clad in multiple layers of Teflon that he discards and dons as he pleases.

Reckon with this: when Nitish broke away from Lalu in the early 1990s, and planned his assault on power in Bihar, his chosen ally was the CPI(ML). Their joint outing in the 1995 Assembly polls was catastrophic. The alliance secured seven seats in the then 324-strong Bihar Assembly.

There isn’t a party or ideology that Nitish has not embraced since then; and once he got a grip on power in 2005, nothing has shaken him off the gaddi.

It is probably a thing of some charm that when he takes oath on Wednesday — for the eighth time in 17 years — the CPI(ML) will be back on stage with Nitish as ally. For more than one reason, they could well play Yesterday Once More as background score.

But this is not only about Nitish Kumar and his dubiously successful run in power in Bihar. This is also about what Tuesday’s events in Patna could tell about Wednesday and thereafter.

On Wednesday’s power stage is set to be arrayed probably the most formidable coalition of political ideologies and social formations Bihar has ever seen. What Nitish has now come to head, courtesy his trademark stab at an ally, in this case the BJP, is far more formidable than the Mahagathbandhan that rebuffed Modi’s high-voltage 2015 grab at Bihar. That verdict was no less than an electric shock because Modi had swept Bihar in the 2014 Lok Sabha elections.

What is ranged against the BJP today — under the newly mounted standard of ally who has turned adversary yet another time — is a never-before combine: the Left, the ultra-Left, the centre, the backward, the extremely backward, the Dalit, the minority.

It’s a thing that must deepen furrows in the BJP backroom. 2024 is less than two years away, and Bihar is not merely a big Lok Sabha state but also a bellwether state in the northern heartland. What turns in Bihar often influences the course and velocity of winds in the neighbourhood.

What came to transpire in Patna on Tuesday, and what Wednesday is set to bring, may be about more than just the provincial ambitions of a politician whose trapeze act has resumed overhead.