V.K. Saraswat has said he was quoted 'out of context' and apologised if it had hurt anyone’s feelings 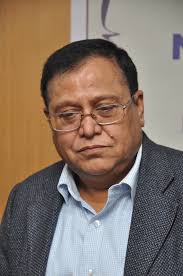 Niti Aayog member V.K. Saraswat has said the Internet shutdown in Jammu and Kashmir did not have any significant effect on its economy as people there use the Net only for “watching dirty films”.

The comments drew a strong reaction from the trade body, the Kashmir Chamber of Commerce and Industry (KCCI), which demanded his immediate removal for uttering “this nonsense”.

On Sunday, Saraswat, a former director-general of the Defence Research and Development Organisation (DRDO), said he was quoted “out of context” and apologised if it had hurt anyone’s feelings.

Saraswat made the controversial remarks in Gujarat’s Gandhinagar on Saturday after attending the convocation of the Dhirubhai Ambani Institute of Information and Communication Technology.

“What difference does it make if there’s no Internet there? What do you watch on the Internet there? What e-tailing is happening there? Besides watching dirty films, you do nothing there,” he told reporters on a query about suspension of Internet services in Jammu and Kashmir over five months ago following the abrogation of its special status.

“If there is no Internet in Kashmir, it does not have any significant effect on the economy,” he said.

He added that Internet services were suspended in Jammu and Kashmir to prevent certain elements from “misusing” information that could affect law and order there.

“If Article 370 had to be removed, and if Kashmir had to be taken forward, we knew there were elements there which will misuse this kind of information in a manner that will affect the law and order situation,” he said.

On Sunday, Saraswat told PTI: “During the conversation, somebody talked about Kashmir and I said ‘Yes, the Internet is required and I respect the feeling of all Kashmiris in this regard that they should be provided the Internet and agree with the fact that they should have the freedom’. But sometimes governments have to take action for maintaining law and order and security to shut down the Internet for sometime. Then the conversation was over and we were talking about many other things. And from many other things, they picked up all this nonsense. I have been misquoted, I have been quoted wrongly and out of context.”

“I have also said that because of being misquoted by the media, if it has hurt the feelings of people of Kashmir or anybody for that matter, I apologise for that,” he added.

Condemning the original remarks attributed to Saraswat, KCCI president Sheikh Ashiq said it was unbecoming of a person entrusted with serious responsibilities to make such statements that “malign the population of Kashmir”.

Ashiq said the Valley was suffering because of the Internet shutdown and the losses to the business sector here had amounted to over Rs 18,000 crore.

“We at the chamber know that our economy has been deeply affected by the suspension of Internet services. Every sector of our economy has suffered a great deal. If any person says something like this, it speaks a volume about his mind capacity. He has no right to sit in the Niti Aayog,” he said.

“We condemn these remarks. They are spreading venom against the people of Kashmir. Nobody gives him the right to speak like this about the people of Jammu and Kashmir and utter this nonsense against us,” Ashiq told PTI.

The KCCI recently submitted a detailed report about the business losses in the Kashmir Valley to lieutenant-governor and the Centre.