Advertisement
Home / India / New-age Stalin to the rescue of comrades

New-age Stalin to the rescue of comrades

The ignominy, however, was reserved for Bengal as the Left failed to grab the second slot in any of the 41 constituencies 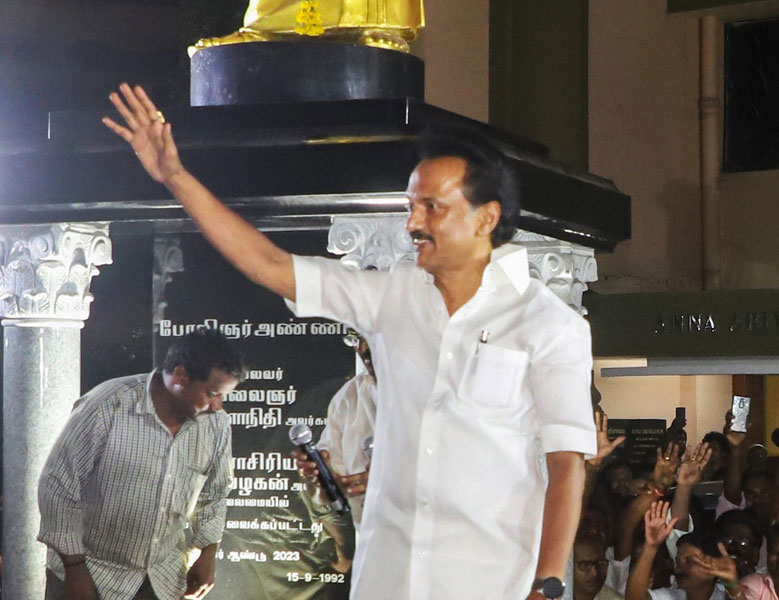 A twenty-first century Stalin helped the Left bag four out of its tally of five in the Lok Sabha polls, but the results produced the final proof of the Left’s decimation in Bengal where it failed to get even a single seat.

Thanks to DMK leader M.K. Stalin, whose party swept the polls in Tamil Nadu, the Left got four seats in the southern state while it bagged one in Kerala. The ignominy was, however, reserved for Bengal as the Left failed to bag the second slot in any of the 41 constituencies in which it had put up candidates and its vote share nose-dived to an all-time low of 7.5 per cent. In the 2009 Lok Sabha polls, it was over 43 per cent. Five years later, it had come down to around 29 per cent.

Why and how it happened had much to do with the Narendra Modi wave, which resulted in the BJP’s vote share spiking from 17 per cent in 2014 to over 40 per cent this time.

The near equality of the quantum of the Left slide and the gain in the BJP vote share proved right the hypothesis that the Left votes were swinging en-masse to the BJP. “The question is what our leaders did to prevent this shift,” said a CPM insider.

The saffron surge not only did cut deep into the Left’s vote share among its Hindu supporters, the Front lost a substantial part of its Muslim voters to the Trinamul as Mamata Banerjee managed to convince a majority of Muslims that Trinamul, and not the Left, was the best bet against the BJP.

The only visible effort to forewarn the voters of the possibility of what was coming was from Buddhadeb Bhattacharjee, who in an interview in party mouthpiece Ganashakti tried to warn the supporters of the consequences of jumping from the frying pan to fire.

Otherwise, the Left was seen bereft of any narrative in this Lok Sabha polls after its efforts to stitch together an alliance with the Congress drew a blank. “Our leaders were trying to draw parallels between the Trinamul and the BJP. They had even suggested an understanding between (Narendra) Modi and Didi (Mamata Banerjee). Can this be a narrative of the CPM?” asked Prasenjit Bose, economist and a former party member.

“From the very beginning, the Left looked unprepared for the poll challenge. First, the Congress spurned their offer… Then, the Left Front chairman Biman Bose had said that they would not put up candidates, where there was a possibility of bagging the number four slot. He even suggested that there was a possibility of bagging the last slot in 20-odd seats, but still they contested,” he added, referring to lack of direction in the run up to the polls.

The poor performance of the party also raised questions about the role of the leadership, especially party general secretary Sitaram Yechury, who replaced hardliner Prakash Karat with the promise of a pragmatic approach.

“In Karat’s time, the party did badly in Bengal, but managed to retain its base in Kerala. Now, we seem to have lost everywhere,” said an insider.

Like in the past, the poor show would result in a clamour for a change in leadership, both at the state and the centre. But the Left faces a bigger challenge and that is how to stay relevant at a time the Left ideology itself faces the threat of losing relevance.

“We will analyse the results and draw up our programme both at the central and the state levels,” said CPM state secretary Surjya Kanta Mishra.