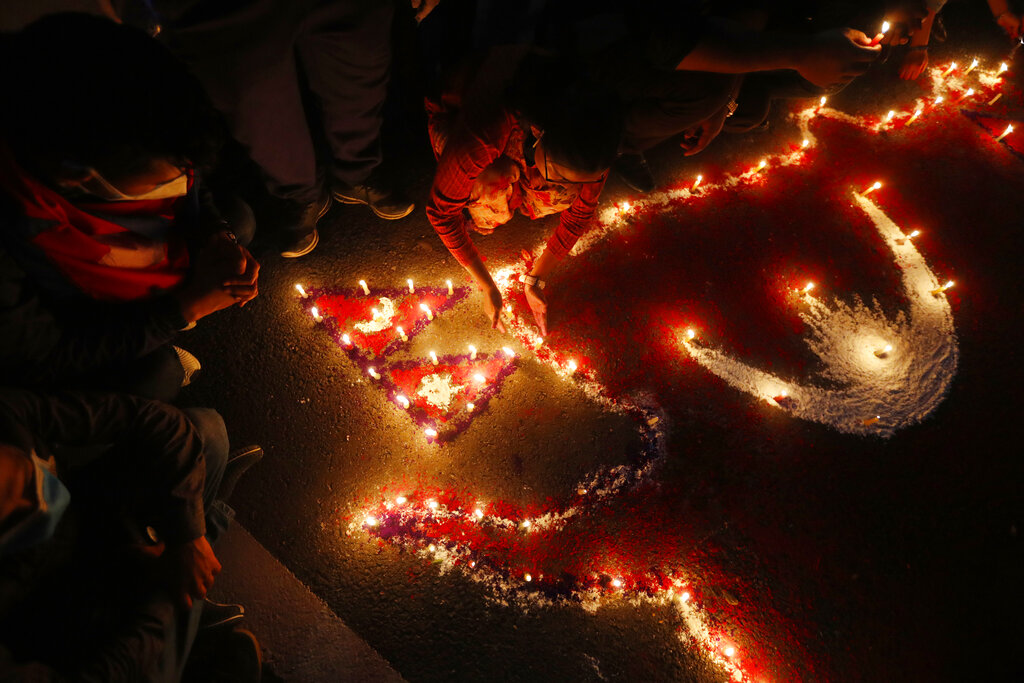 People light candles on an outline of the new map of Nepal drawn on a road as they celebrate the approval of the political map to include territory claimed by both India and Nepal, in Kathmandu, Nepal, Saturday, June 13, 2020.
AP
PTI   |   Pithoragarh   |   Published 21.06.20, 03:17 PM

Nepal's FM radio channels close to the border with India are broadcasting propaganda to back Kathmandu's claim on Kalapani, Lipulekh and Limpiyadhura, residents in India's border villages said.

Nepalese parliament recently adopted a new political map of the country showing these areas as part of its own territory, a move strongly opposed by India.

As people on both sides of the border listen to Nepali songs, they also hear the anti-India speeches delivered by Nepalese leaders in between them, she said.

"Some old channels like Mallikarjun Radio and a website named annapurna.online are also broadcasting reports depicting Kalapani as Nepalese territory, she said.

The FM stations are situated at Chabrigar near the district headquarters in Nepal's Dharchula.

The stations have a range of about three kilometers and can be heard in Dharchula, Baluakot, Jauljibi and Kalika on the Indian side of the border.

These radio stations have also started giving weather reports on Kalapani, Lipulekh and Limpiyadhura, treating them as Nepalese territory, Krishna Garbiyal, a Rang community leader based in Dharchula said.

However, the district administration and police said they have no information about any anti-India propaganda launched by Nepal through its FM radio channels.

We have no feedback from our intelligence units on the subject," Pithoragarh Superintendent of Police Preeti Priyadarshini said.

"Our intelligence units have not yet spoken about any such anti-India propaganda by Nepal," he said.

Ashok Nabiyal, a leader from Vyas Valley, said Indian intelligence agencies active on the border need to take cognizance of the situation to be able to counter the propaganda.