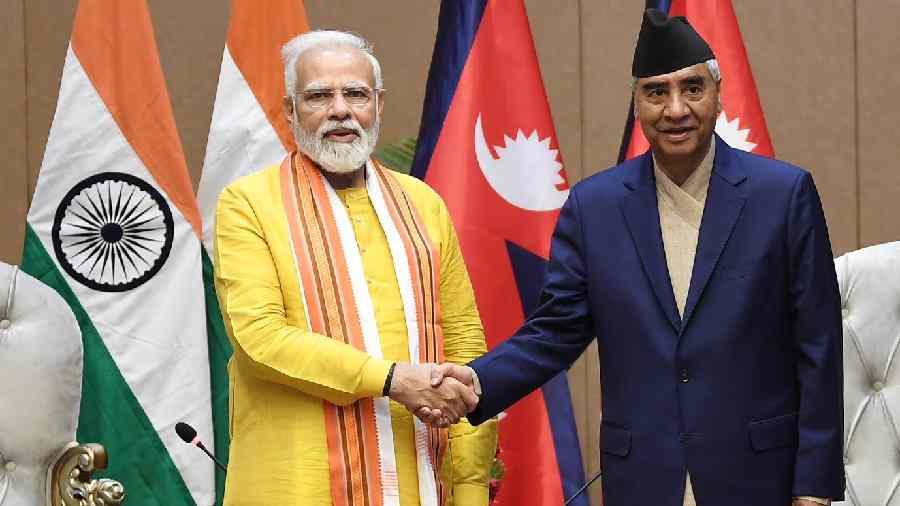 Nepal looks forward to strengthening its relations with India based on mutual respect and understanding, Prime Minister Sher Bahadur Deuba said on Monday, asserting that the two neighbours are tied to each other with common spiritual and cultural values and bonds.

As this year marks the 75th year of formalisation of diplomatic relations between Nepal and India, we look forward to strengthening our relations based on mutual respect and understanding, he said.

Deuba said that a Buddhist circuit that connects Nepal's Lumbini with India's Bodhgaya, Sarnath and Kushinagar will play a positive role in promoting cultural tourism between Nepal and India.

Nepal and India are tied to each other with common spiritual and cultural values and bonds, Deuba said.

We are committed towards developing the Buddhist circuit that connects the important places of Buddha's life with each other.

We are eager to welcome a large number of tourists from India and other countries in the world in the newly constructed Gautam Buddha International Airport in Bhairahwa, Prime Minister Deuba said.

India has provided Nepal significant assistance at difficult times, particularly when the COVID-19 disrupted life and livelihood, he said.

Prime Minister Narendra Modi on Monday left for home after concluding his day-long visit to Nepal's Lumbini, the birthplace of Gautam Buddha, during which he held bilateral talks with his Nepalese counterpart Sher Bahadur Deuba and offered prayers at the sacred Maya Devi temple here on the occasion of Budhha Purnima.

Modi, who was in the Himalayan nation at the invitation of Deuba, visited Lumbini for the first time. This was his fifth visit to Nepal since 2014.

He began his Nepal visit with prayers at the sacred Maya Devi Temple, the birthplace of Gautam Buddha.

Modi was accompanied by his Nepalese counterpart Deuba and his spouse Dr Arzu Rana Deuba during his visit to the historic temple.

The leaders paid their respects at the Marker Stone inside the temple premises, which pinpoints the exact birth spot of Lord Buddha. They also attended the pooja conducted as per Buddhist rituals.

The two leaders watered the Bodhi tree sapling from Bodh Gaya which was gifted by Modi to Lumbini in 2014 and also signed the temple's visitor's book.

They laid the foundation stone for the India International Centre for Buddhist Culture and Heritage in the Lumbini Monastic Zone here.

Prime Minister Modi then held bilateral talks with his Nepalese counterpart Deuba in Lumbini during which they discussed ways to strengthen ongoing cooperation and develop new areas in the multifaceted bilateral partnership.

After their talks, the two sides signed six memorandum of understandings on cooperation in cultural and educational sectors.

Deuba also hosted a lunch in honour of Modi and his delegation.

Land-locked Nepal relies heavily on India for the transportation of goods and services.

Nepal's access to the sea is through India, and it imports a predominant proportion of its requirements from and through India.

The India-Nepal Treaty of Peace and Friendship of 1950 forms the bedrock of the special relations between the two countries.