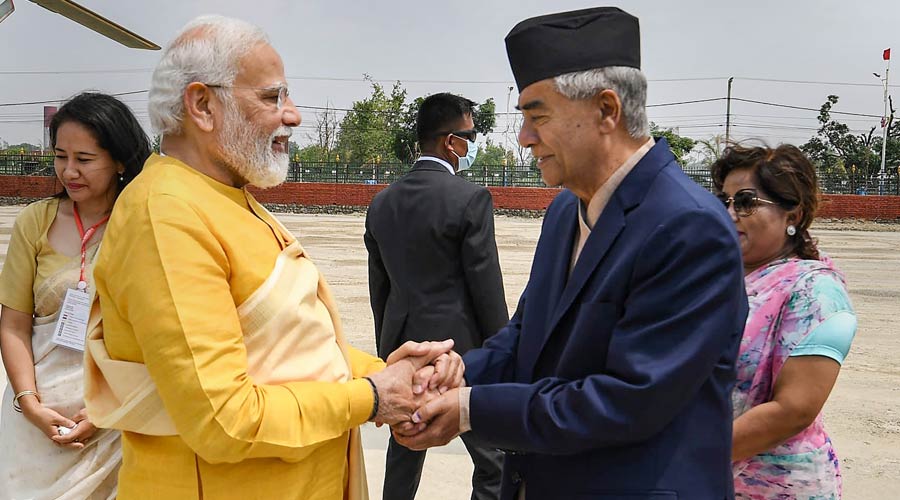 Prime Minister Narendra Modi on Monday held bilateral talks with his Nepalese counterpart Sher Bahadur Deuba in Lumbini - the birthplace of Gautam Buddha - during which they discussed ways to strengthen ongoing cooperation and develop new areas in the multifaceted bilateral partnership.

Modi, who is in the Himalayan nation at the invitation of Deuba on a day-long visit to Lumbini on the occasion of Buddha Purnima, met Deuba after offering prayers at the sacred Maya Devi temple here.

Ahead of his visit, Modi had said that his visit to Nepal is intended to further deepen the "time-honoured" linkages between the two countries, adding both sides will continue to build on the shared understanding to expand ties in multiple areas, including hydropower and connectivity.

"Our ties with Nepal are unparalleled. The civilisational and people-to-people contacts between India and Nepal form the enduring edifice of our close relationship," Modi had said in his departure statement.

Modi had said that he was looking forward to meeting Deuba after their "productive" discussions during the latter's visit to India last month.

Their discussion is likely to focus on further expanding cooperation in multiple areas, including hydropower and connectivity. Some MoUs on cooperation in cultural and educational sectors are expected to be exchanged between the two countries after the Modi-Deuba talks.

It is the prime minister's fifth visit to Nepal since 2014. Modi and his entourage arrived here on a special Indian Air Force helicopter from Kushinagar, Uttar Pradesh.

Foreign Secretary Vinay Mohan Kwatra had said on Friday that Modi's talks with Deuba will have a comprehensive agenda to further expand cooperation.

Land-locked Nepal relies heavily on India for the transportation of goods and services.

Nepal's access to the sea is through India, and it imports a predominant proportion of its requirements from and through India.

The India-Nepal Treaty of Peace and Friendship of 1950 forms the bedrock of the special relations between the two countries.