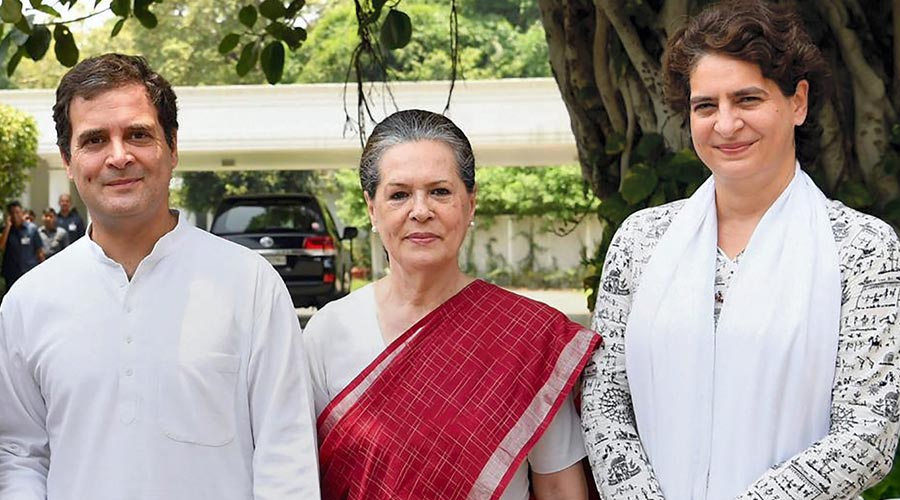 The Enforcement Directorate (ED) on Tuesday raided the head office of the Congress party-owned National Herald newspaper here and 11 other locations as part of an ongoing money laundering investigation, officials said, a week after it questioned Congress chief Sonia Gandhi.

The searches are being carried out under the criminal sections of the Prevention of Money Laundering Act (PMLA) to "gather additional evidence with regard to the trail of funds and they are against those entities who were involved in the National Herald-linked transactions", they said.

The action is being undertaken in light of fresh evidence obtained by the ED after the latest questioning of various people, in this case, they said.

The raids come after the probe agency questioned Congress president Sonia Gandhi and her MP son Rahul at its headquarters here. While Sonia Gandhi was questioned for more than 11 hours, spread over three rounds, last month, Rahul Gandhi was probed by the ED for five days, at intervals, clocking over 50 hours in June.

Senior Congress politicians like Mallikarjun Kharge and Pawan Bansal were also questioned by the ED in April.

The National Herald is published by the Associated Journals Ltd. (AJL), and its holding company is Young Indian.

Officers of the federal agency searched the office of the National Herald located in the 'Herald House' building at Bahadur Shah Zafar Marg near ITO in central Delhi. The office is registered in the name of AJL.

According to officials, the location of a shell (dummy) company in Kolkata involved in the case, has also been covered in the raids.

The Congress party had called the ED action against its leaders "political vendetta", saying there was no money laundering in the case.

"It's not just the Congress but leaders of several Opposition parties who are being harassed," Congress spokesperson Syed Naseer Hussain said, adding that the grand old party "will not bow down".

"The raids on Herald House, Bahadur Shah Zafar Marg are a part of the continued attack against India's principal opposition-Indian National Congress.  We strongly condemn this vendetta politics against those who speak up against the Modi Govt. You cannot silence us!" Congress MP Jairam Ramesh tweeted.

The raids on Herald House, Bahadur Shah Zafar Marg are a part of the continued attack against India’s principal opposition—Indian National Congress.

We strongly condemn this vendetta politics against those who speak up against the Modi Govt.

You cannot silence us!

The Congress party has said it gave a Rs 90 crore loan to an ailing AJL between 2001-02 and 2010-11 and later, in 2011, the shares of AJL were allotted to Young Indian and this debt was converted into equity and the loan was extinguished in the books of the AJL.

The ED claims these transactions attract anti-money laundering charges as a complex web of transactions and routing of funds were undertaken by the party and its leaders to acquire AJL's assets worth multiple crores of rupees.

The Gandhis are understood to have told the ED during their separate questioning sessions that no personal assets were made in the Congress-AJL-National Herald deal as Young Indian was a "not-for-profit" company established under section 25 of the Companies Act.

They also told the ED that AJL continues to have possession of all its assets and Young Indian neither "owns nor controls" these properties.

Sonia Gandhi and Rahul Gandhi are among the promoters and majority shareholders in Young Indian. Like her son, the Congress president also has 38 per cent shareholding.

The ED action in the case was initiated after the agency late last year registered a fresh case under the PMLA after a trial court here took cognisance of an Income Tax department probe against Young Indian based on a private criminal complaint by BJP MP Subramanian Swamy in 2013.

Swamy had accused the Gandhis and others of conspiring to cheat and misappropriate funds, with Young Indian paying only Rs 50 lakh to obtain the right to recover Rs 90.25 crore that Associated Journals Limited owed to the Congress.

In February last year, the Delhi High Court issued a notice to the Gandhis seeking their response to Swamy's plea.

According to the ED, assets worth about Rs 800 crore are "owned" by the AJL and the agency wants to know from the Gandhis how a "not-for-profit company like Young Indian was undertaking commercial activities of renting out its land and building assets".

The Congress party has said that the Income Tax Department has valued AJL's properties at worth about Rs 350 crore.