Speaking after inaugurating an art exhibition on the slain rationalist, Shah said one needed the same conviction to fight superstition as those who hold on to superstitions possess 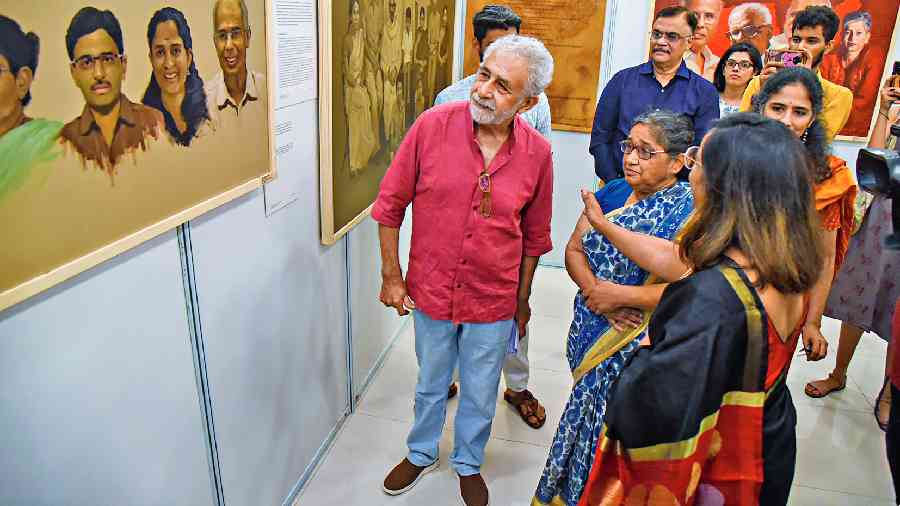 Slain rationalist Narendra Dabholkar’s work cannot be wiped out and his “footprints would only deepen”, actor Naseeruddin Shah said on Friday, also speaking up for “those countless activists, teachers and intellectuals who are languishing in jail”.

Speaking after inaugurating We Are On Trial, an art exhibition on Dabholkar, Shah said one needed the same conviction to fight superstition as those who hold on to superstitions possess.

The exhibition in Mumbai, which features some 30 installations made by students of J.J. School of Art, has been put together by Friends of Dabholkar, a group of activists.

“Dr Dabholkar was among those great men whose footprints would deepen further instead of getting wiped out,” Shah said.

“I am proud that I lived in the same era when people like Dr Dabholkar were a source of inspiration... not just him but (Govind) Pansare, (M.M.) Kalburgi, Gauri Lankesh and those countless activists, teachers and intellectuals who are languishing in jail and we don’t know how long they will be in jail and whose crime was to speak the truth,” he added.

The murders of Kannada writer Kalburgi, communist leader Pansare and journalist Lankesh followed Dabholkar’s killing in Pune on August 20, 2013, while on a morning walk. According to probe agencies, the four murders were committed by the same group.

Shah said such murders had taken place in Pakistan too, mentioning the violent deaths of politician Salman Taseer and rights activist Sabeen Mehmood. “In Iran, thousands of girls have put their lives at stake while carrying on an agitation against the hijab law,” Shah said.

The actor acknowledged that he was not much aware of Dabholkar’s work when he was alive. After learning about him after his murder, “I was astonished that here was a man who put his convictions before his life”.

Earlier, reminiscing about her late husband, Dr Shaila Dabholkar said his motto was “to fight is to win” and “action” was important.  Asked about the several threats that Dabholkar received during his lifetime, she said he never thought about fear of death.

Lawyer Abhav Nevagi, who is representing the Dabholkar family in the cases related to his murder, said the legal battle had witnessed many a twist and turn. At one point, the CBI told the court that the bullets that formed evidence would be sent to Scotland Yard for expert opinion, but later the central agency told the court that there was no agreement between the Indian government and the UK authorities to enable such sharing of evidence. In the process, 10 months were wasted, Nevagi said.