Advertisement
Home / India / Narendra Modi has a plea and some puns for Rahul Gandhi, Shah Rukh Khan and others, on Twitter

Narendra Modi has a plea and some puns for Rahul Gandhi, Shah Rukh Khan and others, on Twitter 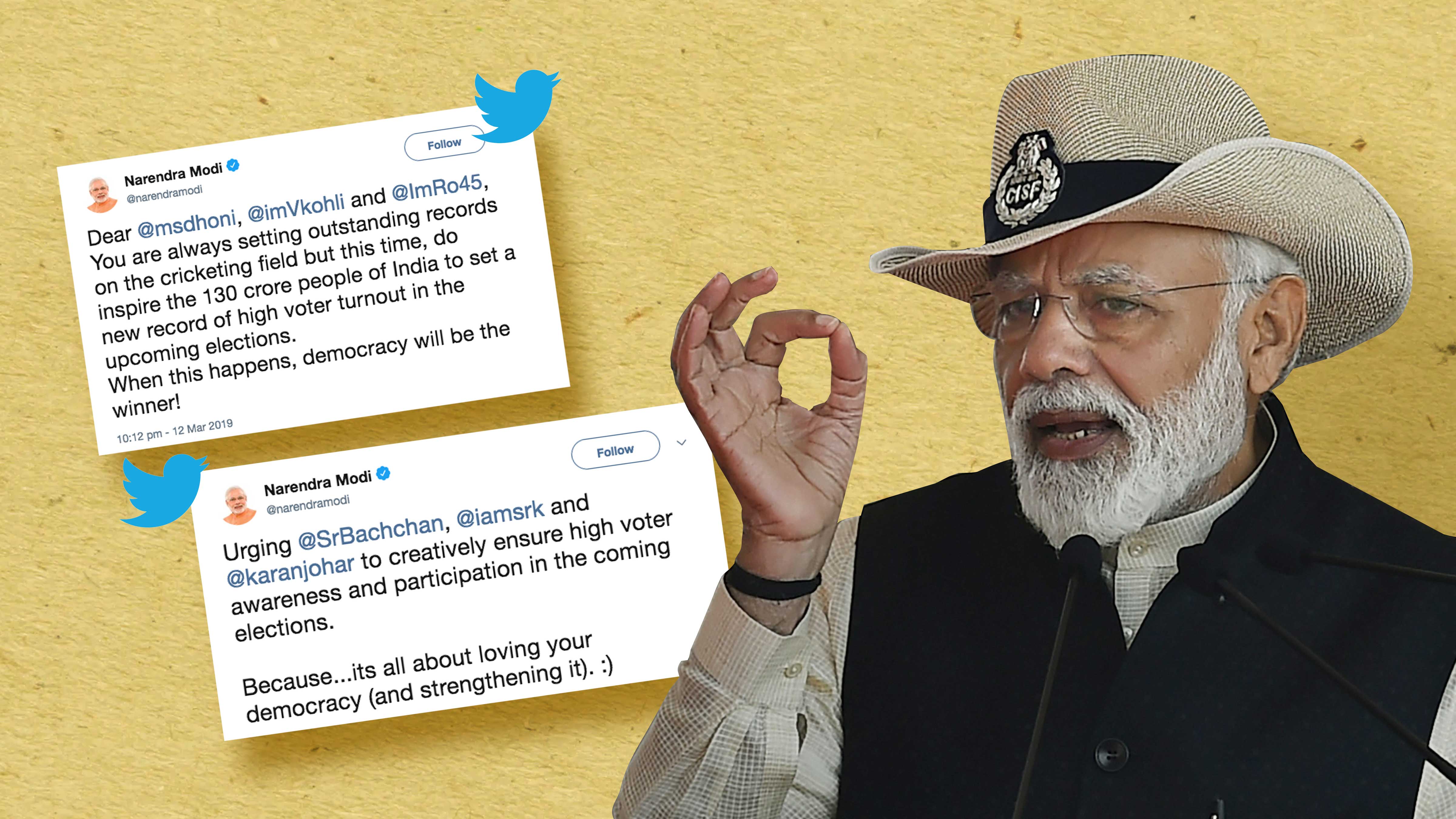 Prime Minister Narendra Modi wants famous people to urge citizens to vote, and he is going fully filmi in his appeal.

In a series of tweets and a blog post, he said voting is among a citizen's prime duties.

'A vote signifies the willingness to contribute to the development trajectory of the nation. By voting, people connect themselves with the country's dreams and aspirations,' he wrote.

Modi called upon 'influencers from all fields, including politics, industry, sports, films and other walks of life' to take the lead in spreading voter awareness.

India wins when our democracy gets strengthened.

Ensuring maximum participation in voting is the perfect way to strengthen democracy.

Can we all make this happen?

The Prime minister also reminded people of the perils of not casting their vote. 'Would you want a situation where something happens in the country that you disapprove of and you are forced to think — because I did not go vote that day, this unfortunate situation has arisen and the nation is suffering?' he wrote on his blog on Wednesday.

He shared a link where people can register as voters.

The 2019 elections, Modi said, are special because for the first time those born in the 21st century will be able to cast their votes. 'I hope all eligible youngsters who have not registered to vote will do so and enrich our democracy by voting,' he said.

Tagging several media personalities and institutions, including Vineet Jain, Sanjay Gupta, Aroon Purie, and the Press Trust of India and ANI news agencies, he said the media plays a vital role in a democracy and has a strong influence on people's minds.

The media plays a vital role in a democracy.

It is also a strong influence on people's minds.

I request @Sanjaygupta0702, @aroonpurie and @18RahulJoshi to work towards greater voter awareness and registration that ensures an impressive turnout at the hustings.

I call upon veterans of the media world, @RajatSharmaLive, @subhashchandra and @vineetjaintimes to take the lead in highlighting the need to vote in large numbers. Doing so would ensure greater participation in democratic processes and strengthen our nation's development.

I appeal to @RubikaLiyaquat, @anjanaomkashyap, @sudhirchaudhary, @rahulkanwal and the team of @republic to spread awareness on voter registration, and why every Indian, particularly the youth should vote.

Your support can ensure more people exercise their franchise.

Dear @msdhoni, @imVkohli and @ImRo45,
You are always setting outstanding records on the cricketing field but this time, do inspire the 130 crore people of India to set a new record of high voter turnout in the upcoming elections.
When this happens, democracy will be the winner!

Dear @anilkumble1074, @VVSLaxman281 and @virendersehwag - your heroic deeds on the cricket pitch have inspired millions.

Come, it is time to inspire people once again, this time to vote in record numbers.

We've seen you in the wrestling world.

I urge you all to support the movement to ensure greater voter participation in the 'Chunavi Dangal.'

When @mangeshkarlata Didi, @sachin_rt and @arrahman say something, the nation takes note!

I humbly request these remarkable personalities to inspire more citizens to come out and vote in the 2019 elections.

A vote is a great way to make the people's voice heard.

The core of badminton is the court and the core of democracy is the vote.

Just like you smash records, do also inspire a record-breaking voter turnout. I request you to increase voter awareness & motivate youth to vote in large numbers.

Modi’s most creative tweets, however, were reserved for Bollywood stars. He asked actors Amitabh Bachchan and Shah Rukh Khan, and producer-director Karan Johar to “creatively” join the drive, ending with a play of words on phrase that has become indelibly attached to Karan Johar — “It’s all about loving your family”.

Years after being paired in Andaz Apna Apna, Aamir Khan and Salman starred together again, in Modi’s tweet. The flavour of the season, Gully Boy, and the prime Minister’s pet film dialogue, “how’s the josh”, from the film Uri featured in a tweet as well.

Because...its all about loving your democracy (and strengthening it). :)

Voting is not only a right but it’s also a duty.

It is time to inspire and motivate youth in your own Andaz to vote so that we can strengthen Apna Democracy & Apna country.

The power of a vote is immense and we all need to improve awareness on its importance.

Requesting @deepikapadukone, @aliaa08 and @AnushkaSharma to urge people to vote in large numbers for the coming elections.

As renowned film personalities whose work is admired by many, I am sure their message will have a positive impact on our citizens.

Many youngsters admire you.

It is time to tell them: Apna Time Aa Gaya Hai and that it is time to turn up with high Josh to a voting centre near you.

Priyanka: Beware of braggarts and be aware. ‘Nothing can be more patriotic’