Bapu despised dynastic politics but the ‘Dynasty First’ is the way for the Congress today, said the Prime Minister 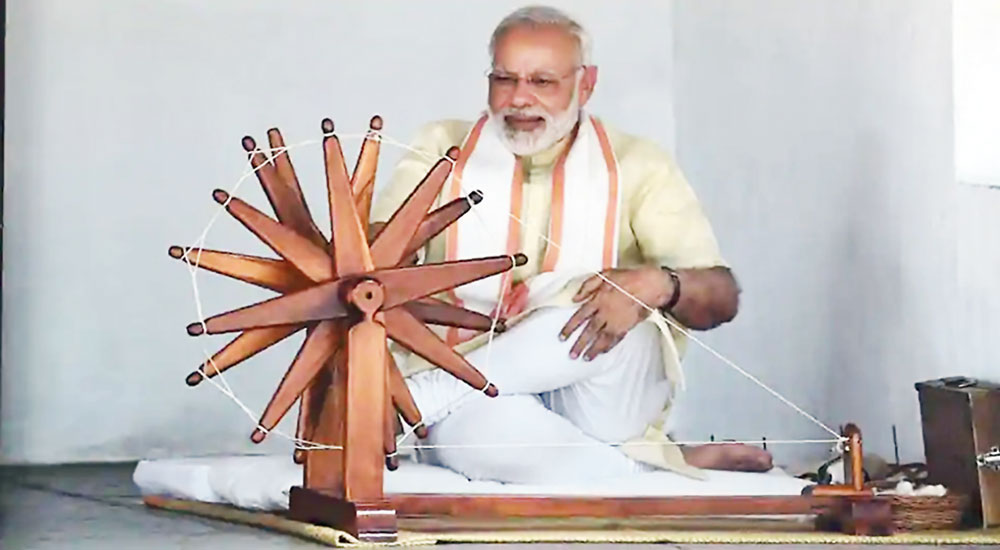 Prime Minister Narendra Modi on Tuesday posted a blog on the 89th anniversary of Mahatma Gandhi’s Dandi March, claiming his government was working “on Bapu’s path” while slamming the Congress’s culture as being the “anti-thesis of Gandhian thought”.

The blog, on the Narendra Modi App, appeared to be aimed at attacking the main Opposition party on a day the Congress Working Committee met in Ahmedabad in the Prime Minister’s home state Gujarat.

“Sadly, the anti-thesis of Gandhian thought is the Congress culture,” Modi wrote. “In many of his works, Gandhi Ji said that he does not believe in inequality and caste divisions. Sadly, the Congress has never hesitated from dividing society. The worst caste riots and anti-Dalit massacres happened under Congress rule.”

Modi, who has stopped his monthly radio address Mann Ki Baat because of the upcoming April-May elections, appears to have taken to blogging to target political rivals in the lead-up to the battle.

Finance minister Arun Jaitley, who often posts blogs on Facebook, came up with one on Tuesday too in a two-pronged attack on the Congress.

While Modi cited the Father of the Nation to target the rival, Jaitley referred to national security and the February 26 air strikes on Balakot across the border following the Pulwama terror attack that left 40 CRPF troopers dead.

The minister accused the Congress of having started what he called the “appeasement of terror” and “playing into the hands of Pakistan”.

He said the “political fallout” of the Modi government’s actions against terror had disturbed the Congress. “The Congress is one with the Government on condemning Pulwama but is disturbed about Balakot. Thus it repeatedly rubbishes the surgical strikes,” Jaitley wrote.

“They (the Congress) started demanding proof that terrorists had died at Balakot. They even contended that the strike had taken place not against terror but to ensure BJP’s victory in the forthcoming elections. This was a self-goal by the Congress in domestic politics,” Jaitley added.

Modi, who has been steadfastly trying to appropriate Gandhi since taking over as the Prime Minister in 2014, quoted the Mahatma extensively while attacking the Congress.

“Bapu spoke about detachment and staying away from excess wealth. However, all that Congress has done is to fill their own bank accounts and lead luxurious lifestyles at the cost of providing basic necessities to the poor,” he wrote.

“Bapu despised dynastic politics but the ‘Dynasty First’ is the way for the Congress today,” he said. “Gandhi Ji understood the Congress culture very well, which is why he wanted the Congress disbanded especially after 1947.”

Historians have said Gandhi’s call for “disbanding the Congress”, just before his assassination, was basically in the context of redefining the role of the Congress after Independence.

“Tracing the evolution of this debate on the role of the Congress shows that ‘dissolution’ was not a distinct Gandhian perspective, counterpoised to the official Congress line that it is made out to be,” Sucheta Mahajan, professor, Centre for Historical Studies, School of Social Sciences, Jawaharlal Nehru University, has said in an article.

The BJP’s focus in the run-up to the general election has been on painting the Congress as “corrupt”, an “appeaser of terror” and “pro-Pakistan” and projecting party chief Rahul Gandhi as a “failed leader”.

The BJP fears that a revival in the Congress’s fortunes could turn it into a nucleus of Opposition unity and prompt anti-BJP voters to gravitate towards the party.