More to Jagan Mohan Reddy’s letter ‘than meets the eye’

Suggestion that Justice N.V. Ramana had favoured Chandrababu Naidu and the judge’s daughters had purchased land under questionable circumstances in Amravati 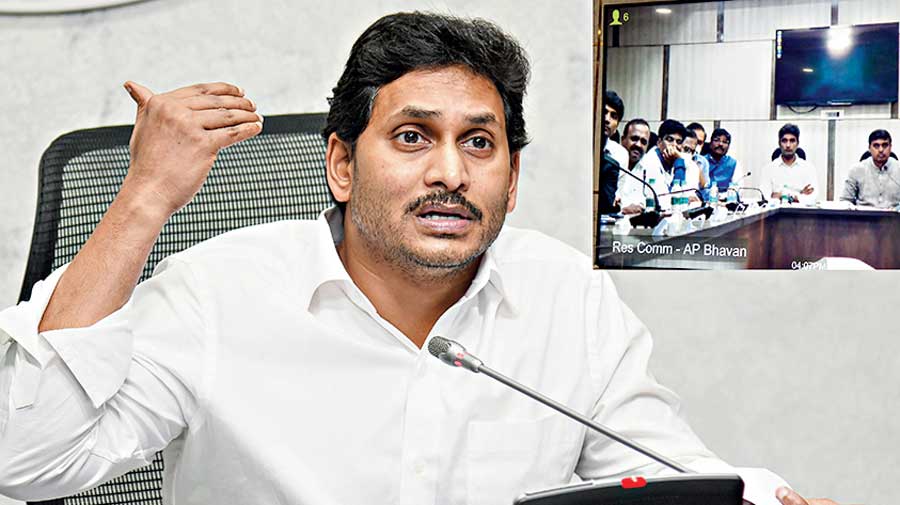 There is more to the letter Andhra Pradesh chief minister Y.S. Jagan Mohan Reddy has written against Justice N.V. Ramana, the next in line to be the Chief Justice of India, than meets the eye, multiple judicial sources in the capital said on Sunday.

Jagan had suggested in the letter addressed to Chief Justice of India S.A. Bobde that Justice Ramana had favoured the chief minister’s political rival and Telugu Desam Party leader N. Chandrababu Naidu and the judge’s daughters had purchased land under questionable circumstances in Amravati before the site was chosen for the new Andhra capital.

Now the second senior-most judge in the Supreme Court, Justice Ramana is scheduled to become the next Chief Justice of India on April 24, 2021, and demit office on August 26, 2022.

The judicial sources in New Delhi suspect that Justice Ramana was being targeted because he is heading a bench that has recently passed a series of orders to the Centre, states, Union Territories and all high courts to expedite the trial of criminal cases against all lawmakers across the country within a year.

They suspect that attempts are underway to scuttle the initiative to expedite the cases. The issue had been pending with the apex court since 2017.

The sources said Jagan himself was facing multiple cases under the Prevention of Corruption Act linked to alleged disproportionate assets and had been earlier arrested by the CBI. In the interest of transparency and propriety in public life, the chief minister should have mentioned these matters in his letter to the Chief Justice, they added.

When he was in the Opposition, Jagan had spent nearly 16 months in jail over various cases before being granted bail.

“Since the trial against Jagan is on the verge of completion before the special CBI court in Hyderabad, the timing of the letter suggests there is more to it than meets the eye,” said a source.

A conviction and harsh sentencing in a corruption case can seal the fate of political careers for long. A convict can stand disqualified for six years from contesting elections from the date when the actual sentence ends. In short, if a public servant is sentenced to 10 years in jail, he or she will be shut out of electoral politics for 16 years.

A coincidence also caught the eye of some judicial as well as political figures. Jagan’s letter to the Chief Justice was dated October 6 (although it was made public only on Saturday), the same day the chief minister had met Prime Minister Narendra Modi in the capital to discuss affairs of state.

The meeting was associated with central funds for an irrigation project in Andhra and GST but political meanings were read into it then because the Akalis had pulled out of the NDA by then and it was assumed that the BJP was scouting for new allies to send a message.

With Naidu, Jagan’s principal opponent, no longer being part of the NDA, “there could be a convergence of interests” with the BJP, a source said. Jagan’s YSRCP has 21 members in the Lok Sabha and six in the Rajya Sabha.

Jagan’s party, despite being in the Opposition, so far has hardly opposed the government. The party had supported the Citizenship Amendment Bill in Parliament and the recent farm bills.

The judicial sources saw a pattern. For the past six years, there has been a systematic effort to dent the image of judges who are in line to be the Chief Justice of India, they pointed out.

Justice Ramana, who was initially part of the constitution bench headed by then CJI Ranjan Gogoi to deal with the Babri Masjid-Ayodhya land row, had recused himself from the hearing. He had also recused himself from the judges’ committee constituted by Justice Bobde to probe the sexual harassment allegations against Justice Gogoi levelled by a Supreme Court employee.

Justice Ramana had recently passed a judgment directing the Union government to set up a committee to restore the Internet services curtailed in Jammu and Kashmir since August 5 last year following the abrogation of Article 370.

Several judges this newspaper spoke to said they had never come across anything that cast any aspersion on Justice Ramana’s discharge of his responsibilities.

On the land purchase by Justice Ramana’s daughters, one of the senior-most judges of the Supreme Court told The Telegraph: “They are entitled to buy land like any other citizen of the country. If purchasing land in the country is a criminal offence, then the judge’s daughters are guilty.”

Several people had bought land in Amravati anticipating a construction boom and spike in prices after Andhra Pradesh was bifurcated. After Jagan came to power, he cancelled the plan to make Amravati the sole capital. The matter is in court.