As a parting shot, the PM warned of the dangers of a government that doesn’t command a full majority 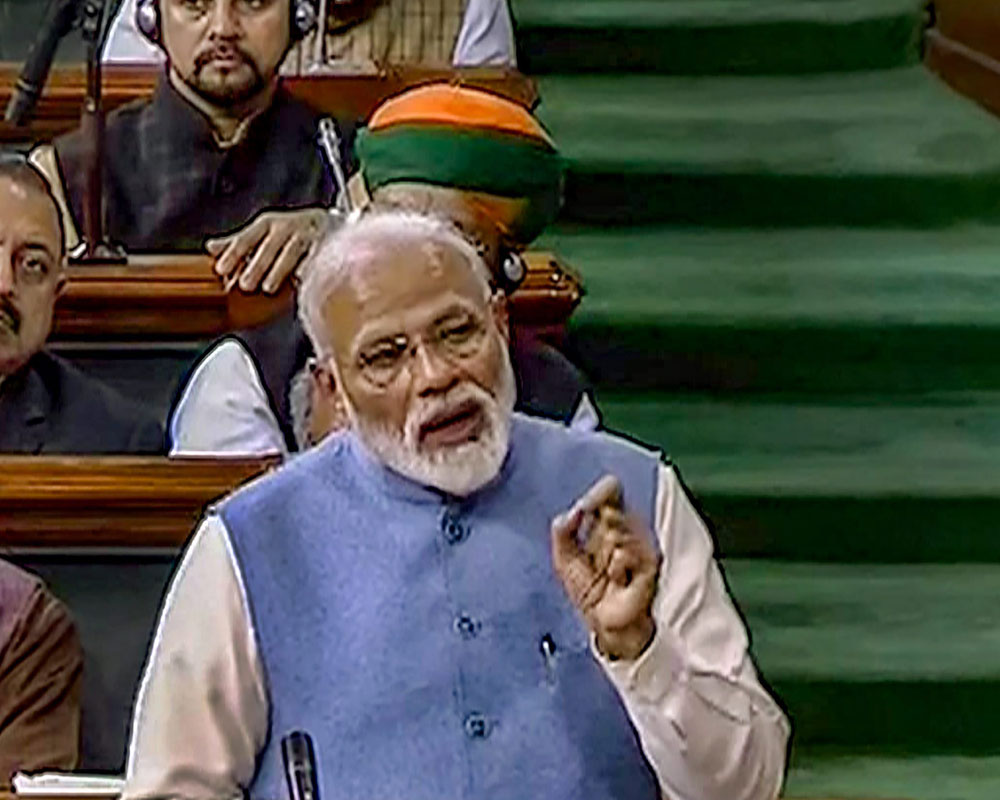 Prime Minister Narendra Modi on Wednesday used the customary farewell speech on the last day of the Lok Sabha to once again take swipes at Sonia Gandhi and Rahul Gandhi and bat for a single-party majority government.

Modi’s speech was unusual because such parting addresses, by the Prime Minister and leaders of various parties, are usually thanksgiving exercises to acknowledge the role of the Speaker and the contribution of the Opposition. On Wednesday, too, the other speakers across party lines mostly stuck to the norm and wished each other well.

Modi described his administration as the first single-party majority government that was not of the “Congress gotra” and went on to spew venom on the Gandhi family without taking names.

The Prime Minister said that as a first-time member of the Lok Sabha who didn’t even know the “geography of Parliament”, he had learnt many new things. He referred to Rahul’s prediction of a “bhukamp” (earthquake) if he was allowed to speak in Parliament about demonetisation and the Congress president hugging him in the House.

Did more in 55 months than the Cong had in 55 years, says Modi


I was warned of an earthquake. Five years are over and no earthquake came.
- PM Narendra Modi


Referring to Rahul’s surprise gesture last year to walk across the floor of the House to hug Modi and later wink, the Prime Minister said he had learnt the difference between “gale lagna” (hugging) and “gale padna” (piling on someone). “I also witnessed winking in the House,” he added.

Modi recalled that Congress members had flown paper planes in the House while protesting against the Rafale deal. UPA chairperson Sonia Gandhi had allegedly helped party MPs make the planes. “Planes were flown (in the House). But the strength of democracy was so great that neither an earthquake came, nor a plane could reach that height,” he said. Sonia was present in the House when Modi spoke, Rahul was not.

“It is for the so-called liberals, who don’t tire of criticising us, to find out why the names of only three PMs are there,” Modi said. He, however, didn’t give the three names.

Again without taking names, Modi attacked Congress MP Renuka Chowdhury when he recalled “athaahas (loud laughter)” during his speech in the House and said the entertainment industry can learn from that. When Renuka had laughed out loud during Modi’s speech last year, the Prime Minister had said the last time he heard such laughter was in the television serial Ramayana. This was taken as a reference to Surpanakha.

Modi also claimed that India’s global standing and “self-confidence” had increased substantially in the past five years and credited it to his single-party majority government.

“We don’t understand the harm caused by a government that doesn’t command full majority. Full mandate gives strength to the leader and the world takes him seriously,” Modi said and thanked the people of the country for electing a majority government after 30 years of coalition rule.

While he targeted Sonia and Rahul, Modi showered praise on Congress House leader Mallikarjun Kharge for his hard work as a member of Parliament.