Advertisement
Home / India / Did more in 55 months than the Cong had in 55 years, says Modi

Did more in 55 months than the Cong had in 55 years, says Modi

The milestone figure came close to another signature number: the 56-inch chest 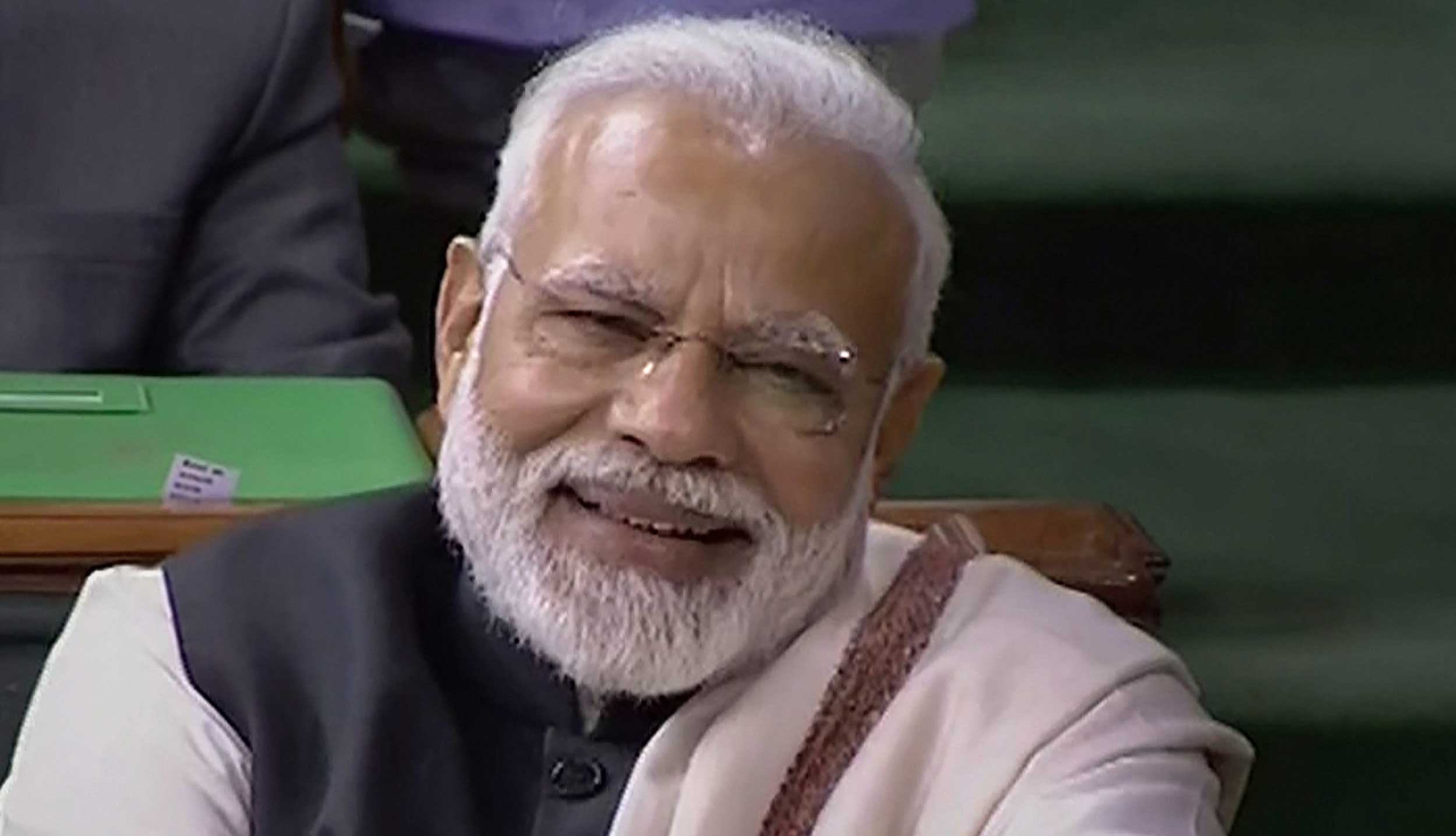 Prime Minister Narendra Modi treated the Lok Sabha to an election speech on Thursday, espousing a single-party government, jeering at the Opposition’s grand alliance as a “mahamilavat” (grand adulteration) and claiming to have achieved more in 55 months than the Congress had in 55 years.

The Prime Minister quoted figures to claim that he had achieved much more in every sector in the last 55 months in comparison to the Congress’s 55 years of rule. The milestone figure came close to another signature number Modi had cited on the 2014 campaign trail: the 56-inch-chest leader India needs to solve its problems.

“In 55 years, sanitation coverage was around 38 per cent; in our 55 months it has risen to nearly 98 per cent. Their 55 years yielded 12 crore gas connections; another 13 crore were added in 55 months. We have worked at greater speed in our five years,” he said.

He said that while the Congress had enjoyed the fruits of power during its 55 years in power, he had served the people during his 55 months.

Advertisement

In 55 years, sanitation coverage was around 38 per cent; in our 55 months it has risen to nearly 98 per cent. Their 55 years yielded 12 crore gas connections; another 13 crore were added in 55 months. We have worked at greater speed in our five years.
- Narendra Modi


Modi appealed to first-time voters to cast their votes intelligently and said they needed to be told how the country had suffered under “milawati” governments.

He swatted back the Opposition charge that the government was trying to scare political opponents by misusing its various agencies.

“Darna padega (You’ll have to be afraid),” he said. “I assure you, those who have robbed the nation will continue to be scared of Narendra Modi.”

The Prime Minister’s championing of a single-party government stood out, coming against the backdrop of a perception that the BJP was likely to lose the majority it had secured in 2014.


Darna padega (You’ll have to be afraid). I assure you, those who have robbed the nation will continue to be scared of Narendra Modi.
- Narendra Modi


He asserted that now that the people had seen what a government with an absolute majority can do, they would never choose the Opposition’s “mahamilavat”.

“For 30 years the country saw ‘milavati’ (adulterated) governments. A health-conscious society keeps away from adulteration. A healthy democracy too abhors adulteration. And what is being offered now is a ‘mahamilavat’,” he said, as BJP members thumped their desks.

When the Congress benches pointed out that Atal Bihari Vajpayee's government was a coalition too, Modi shot back that had the BJP possessed a full majority then, the country would have looked different today.


For 30 years the country saw ‘milavati’ (adulterated) governments. A health-conscious society keeps away from adulteration. A healthy democracy too abhors adulteration. And what is being offered now is a ‘mahamilavat'.
- Narendra Modi


His push for a single-party government and projection of himself as the only alternative came on a day Union minister Nitin Gadkari earned applause from Congress members, led by Sonia Gandhi, for his performance in the road sector.

Hours before Modi's speech, the transport minister had during Question Hour given a detailed reply on the work done by his ministry to improve the country's infrastructure.

While BJP members thumped their desks, Sonia, who was listening patiently and nodding to Gadkari's replies, started banging on hers too. Seeing Sonia's rare gesture, other Congress members joined in.

Gadkari is widely seen as a possible challenger to Modi if the BJP slips well below the majority mark, as he is expected to be more acceptable to prospective allies.

The minister, known as an RSS favourite, has been in the limelight in recent weeks for his veiled criticism of Modi and BJP president Amit Shah for the party's recent defeats in three heartland states. Gadkari was not present in the Lok Sabha when Modi spoke.

The Shiv Sena, an increasingly defiant BJP ally, too lauded Gadkari's performance and referred to his statement about the party leadership's need to own responsibility for the defeats in the three states. The Sena has been championing Gadkari's cause as prospective NDA Prime Minister after the general election.

Speaking on the motion of thanks to the President's address, Sena MP Anand Rao Adsul said the government should accept that the November 2016 demonetisation - a brainchild of Modi - was a 'big mistake'.

Modi appeared to betray jitters about being pushed out by the allies if the BJP falls short of majority. He claimed that coalition governments had failed the country for 30 years before he arrived on the scene in 2014.

Some of the achievements of the coalition governments that ruled the country for the 25 years before Modi are the liberalisation of the economy, National Rural Health Mission, rural employment guarantee scheme, right to information, and the eradication of polio.

Modi accused the Congress of weakening the country's air force by raising a controversy over the Rafale deal.

'The Congress doesn't want to strengthen the air force. Why do they want to get the Rafale deal scrapped? Which company are they bidding for that they are acting so shamelessly?' he asked.

He accused the Congress of depriving and insulting the army while in power.

Perhaps realising that unemployment was a big issue, he quoted figures about new provident fund accounts, the sale of commercial vehicles and Mudra loans to claim his government had created employment in both the formal and informal sectors.

Modi described the Congress's promise of a loan waiver as a betrayal of the farmers and claimed the new income-support scheme announced by his government would strengthen the poor tillers. He said the farm loan waiver in Karnataka was a bluff to the farmers.

Referring to Mahatma Gandhi's reported suggestion to disband the Congress after Independence, he said: 'Mahatma Gandhi had back then recommended the dissolution of the Congress. So, 'Congress-mukt Bharat' is not my slogan - I am just fulfilling the wishes of Gandhiji.'

Modi's speech was constantly interrupted by Opposition references to the fugitive, bank fraud-accused diamantaires Nirav Modi and Mehul Choksi.After he wound up, BJP members chanted 'Modi, Modi…' and thumped their desks. Ministers and allies rushed to congratulate him.

After dig at Modi's probity, Rahul guns for strongman image