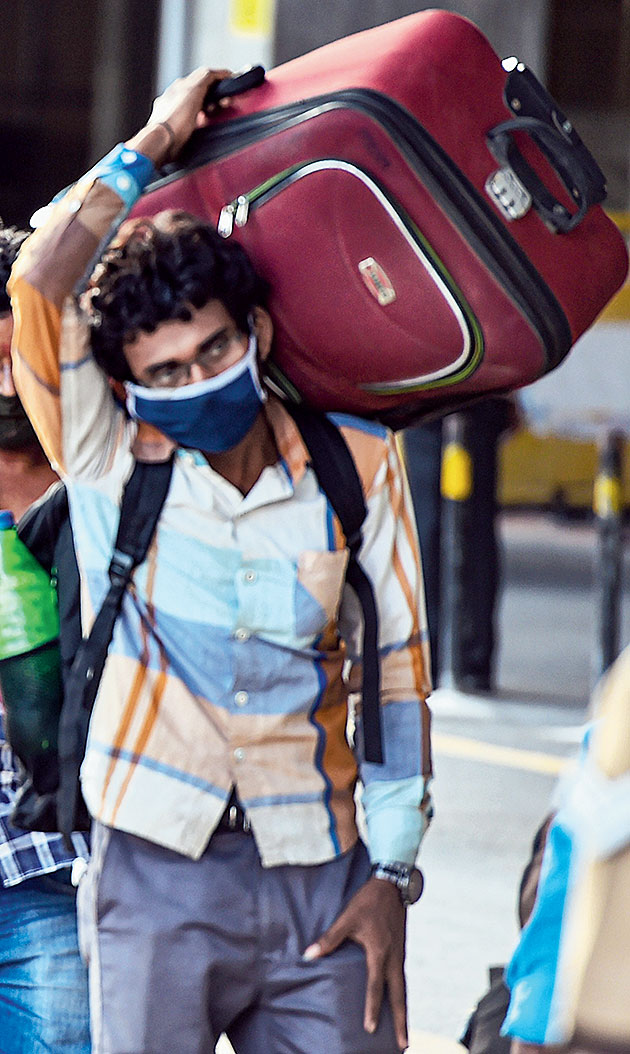 Many migrant workers who had undertaken an arduous journey back home to Uttar Pradesh after losing their livelihood due to the lockdown say they would rather live on “sookhi roti” (dry bread) and forego better education for their children than leave their native places again.

Be it Shivlakhan from Banda district who used to work in a sari factory in Gujarat’s Surat, Imran Khan from Ballia who had been a house painter in Mumbai, or Anil Kumar, an engineer who came back from Solapur in Maharashtra, an overwhelming number of victims of the lockdown are saying they will do whatever they get in their village but won’t go to other states.

“We will eat sookhi roti in our village rather than go to another state again for a job. What we went through has taught us that our well-wishers are here only,” a migrant worker said.

Shivlakhan, who had started on foot from Gujarat with his minor daughter and pregnant wife for Bhadawal village in Uttar Pradesh, said: “I used to earn Rs 550 a day at a sari factory in Surat. But it closed and the owner sacked me without paying my salary dues.

Migrant worker Kiran Devi walks along a Delhi road with her children on Wednesday on her way home to Chhatarpur in Madhya Pradesh. She started her journey from Jalandhar in Punjab on May 23.
(PTI)

“With no option left, I decided to return to our village with my two-year-old daughter and pregnant wife. We started on foot and finally reached here after facing immense difficulties. I don’t have a job card, so the village head did not give me any work. I have applied for one.”

Deepak from the same village, who was Shivlakhan’s co-worker in Surat, said he used to earn Rs 11,000 a month, but returned home after the unit downed its shutters during the lockdown. “I am sitting at home unemployed,” he said.

In Ballia’s Chainpur village, 40-year-old Imran is worried about his son’s education. He spent over two decades in Mumbai working as a house painter. But once the lockdown was imposed, he lost his livelihood.

“I have to support my father, wife and two children. Because of the lockdown I was not getting work and had to return to my village. The village head has taken my Aadhaar and bank account details. My son is a graduate, but I will not be able to afford his education further,” he said.

Despite the adversities, Imran has no plan to return to Mumbai. “I will live in the village. We received no help in Mumbai.”

Anil Kumar Verma, 40, who worked as a safety engineer at Solapur, returned to Uttar Pradesh in a Shramik Special train and is lodged in a quarantine centre at Ballia’s Siyarhiya village.

“I boarded the Shramik Special on May 19 and reached here on May 23. My family is living in Naraingarh village. I have not got anything from the government, my friends have also distanced themselves,” he said.

“In bad days, no one helped in Solapur and there is no point in returning. I will get some work in my village. It seems God doesn’t want my children to study in a convent school. They will now go to government schools,” Anil added.

The head of Banda’s Bhadawal village, Ramendra Verma, said 274 people had returned home and of them, 150 had been hired to dig earth under the MGNREGA for Rs 205 a day. “There are many who did not want to work. They are ashamed of these kinds of works in the village after returning here after a long time,” he said.