Between May 1-31, 61m doses were administered by states and Union territories, says health ministry 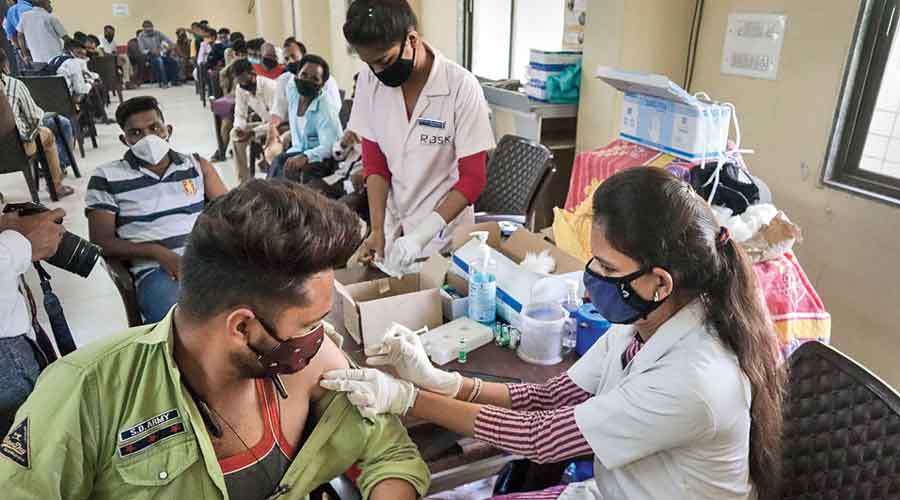 The Union health ministry on Wednesday termed as "factually incorrect and without any basis" media reports alleging that while the Centre has promised 120 million doses of anti-Covid vaccines in June, only around 58 million doses were administered of the 79 million doses available in May.

According to the ministry's data at 7 am on June 1, between May 1-31, a total of 61.06 million vaccine doses were administered by the states and Union territories.

A total of 16.22 million balance and unutilised doses were available with the states. The total number of vaccine shots available from May 1-31 was 79.45 million, the ministry said in a statement.

The Centre has been supporting the efforts of the states for an effective vaccination drive under the "Whole of Government" approach since January 16.

In order to streamline the availability of vaccine doses, the Centre has been in constant touch with the vaccine manufacturers and has opened up different procurement options for the states and Union territories since May 1.

There have been several unfounded media reports that have peddled misinformation among the masses regarding this exercise of national importance, the ministry said, adding that the total number of Covid-19 vaccine doses administered in the country has reached 21,85,46,667.

"There have been media reports alleging the Union Government promised 120 million doses of vaccines during June 2021 while administering only around 58 million doses from the total of 79 million doses available in the month of May. This report is factually incorrect and without any basis," the statement said.

Some media reports have criticised India's vaccination policy based on unverified quotes, it said, adding that these reports, questioning the prioritisation of population segments, are not supported by full information on the matter.

The National Expert Group on Vaccine Administration for Covid-19 (NEGVAC) was formed in August last year to provide guidance on all aspects of vaccine introduction, including prioritisation of beneficiaries, procurement, vaccine selection and its delivery. The prioritisation of beneficiaries for Covid-19 vaccination was based on a review of available scientific evidence, WHO guidelines, global examples and practices followed in other countries, the ministry said.

In India, the primary objectives of Covid vaccination are to protect the healthcare workers as part of the pandemic response system, prevent deaths and protect individuals at the highest risk and vulnerability of mortality due to the disease.

Accordingly, the vaccination drive has been sequentially expanded to cover the prioritised groups, starting with the healthcare workers (HCWs), followed by the frontline workers (FLWs), then people aged 60 years and above and those aged 45-59 years with 20 identified comorbidities.

Subsequently, from April 1, all citizens aged 45 years and above became eligible for vaccination.

Such an approach has yielded positive results by achieving more than 81 per cent first-dose coverage among the registered HCWs and around 84 per cent first-dose coverage among the FLWs, thereby protecting these cohorts who are involved in providing healthcare services, surveillance and containment activities amidst the second wave of the pandemic.

From May 1, all citizens aged 18 years and above became eligible for vaccination. A "Liberalised Pricing and Accelerated National Covid-19 Vaccination Strategy" was adopted on May 1 which is guiding the ongoing third phase of the Covid-19 vaccination drive.

Under the strategy, every month, 50 per cent of the vaccine doses of any manufacturer cleared by the Central Drugs Laboratory (CDL) would be procured by the Centre. It would continue to make these doses available to the states and Union territories for free, as was being done earlier.

The remaining 50 per cent doses are available for direct procurement by the states, Union territories and private hospitals, of which the states' share is on a pro-rata basis.