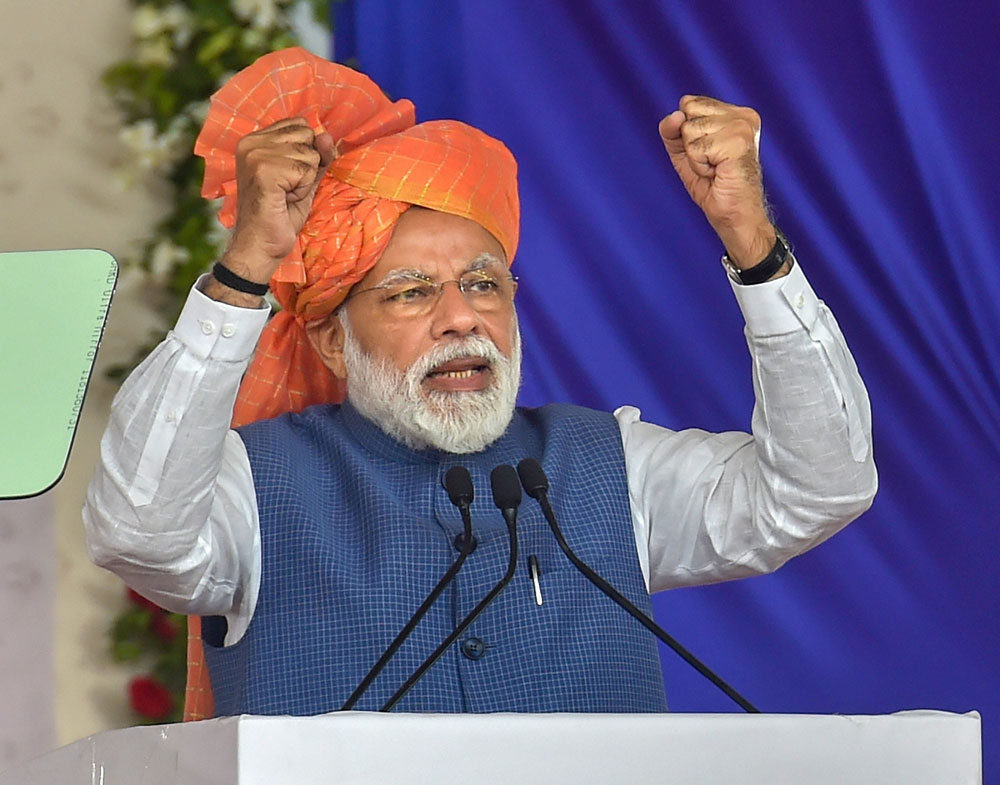 Narendra Modi at the launch of a pension scheme for unorganised workers in Ahmedabad on Tuesday. The Prime Minister said during the day that Opposition “persons have become poster boys of Pakistan by terming it an ambassador of peace”.
(PTI)
Anita Joshua   |   New Delhi   |   Published 05.03.19, 09:36 PM

As sparks continue to fly over whether terrorists or trees were felled in Balakot, one confirmed casualty in India has been the meaning of the word “irony”.

“Sources” associated with the Indian establishment on Tuesday put the onus on the Pakistani media for asking searching questions so that the untruths being dished out by the government there would be exposed.

The irony of advising the media across the border to do their job while ministers and BJP spokespersons brand questioners at home anti-national and anti-military appears to have been completely lost on the “sources”.

The nudge to the Pakistani media came at a time Prime Minister Narendra Modi and other leading lights of the government have been construing any attempt to seek information on the pre-emptive strike as an act of hostility towards the armed forces.

The government has also been seeking to hide behind the defence shield, projecting any criticism of the executive leadership as that of the armed forces.

The shrill campaign has become a babel of voices with casualty numbers ranging from “large” to “350” to “nil” to “250” and “400” (the latest figure is a claim made by Union agriculture minister Radha Mohan Singh on Tuesday).

Prime Minister Modi on Tuesday described Opposition leaders as “poster boys of Pakistan” for “trying to demoralise our armed forces by asking for proof of the air strikes”.

Modi did not refer to his own party chief and ministers coming up with conflicting figures and versions. Neither did he mention the opinion of his ally Shiv Sena that the government should provide details of the casualties.

Union home minister Rajnath Singh, who usually desists from making intemperate remarks, said in Assam: “I ask my Congress friends to go to Pakistan and count the bodies or ask the people there.”

Law minister Ravi Shankar Prasad held a media conference to accuse the Congress of weakening India’s morale by referring to international media reports that said evidence of high casualties were yet to be found and not paying attention to coverage in the Indian media.

A few hours before the minister spoke, two researchers had written an article in The Washington Post, headlined “After Pulwama, the Indian media proves it is the BJP’s propaganda machine”.

The researchers wrote: “The Indian media has ascribed to itself the role of an amplifier of the government propaganda that took two nuclear states to the brink of war.”

Prasad did read out the beginning of a foreign news agency report narrating accounts of earthquake-like explosions in Balakot. But the key conclusion of the full report was that no eyewitness could confirm deaths.

So far, few have said they do not believe the armed forces. The doubt is about whom to believe in the Modi government, given the multiple and conflicting views from within and the tendency to slam the door on any question by saying it amounts to expressing disbelief in the armed forces.

It is against this backdrop that the Indian “sources” — a nebulous term that is in the news now for putting the casualty figure at 300-plus — dished out their advice to the Pakistani media.

The “sources” asked that if, in fact, there is no damage in Balakot, as the Pakistani media claims, “then why are they not being taken to this site seven days after the incident? After all, today (Tuesday) is the seventh day. Yet, the Pakistani media has not been taken to the site. If, in fact, we did nothing except hit four trees and a crow, there should be no difficulty in taking the media on the very first day. Certainly by the seventh day, they should be able to take the media to those places and show it to them. That’s not been done.”

The “sources” went to the extent of saying the Pakistani media should be asked, “why they are not asking their government....”

Since “irony” has been a casualty, it may not have occurred to the sources that if “asking questions” is a crime in democratic India, it must be so for army-driven Pakistan, too.

Referring to Islamabad’s initial claim that two Indian jets were shot down, the “sources” in New Delhi asked why the Pakistani media are “not asking their government ‘where is the fuselage of the second aircraft and where are the mortal remains of those pilots if they are dead, and if not where are they’? Why are they not being handed over to the Indian government?”

Pakistan had clarified on Wednesday evening that one Indian aircraft had been downed and they had one Indian Air Force pilot.

All questions raised by the Indian “sources” are very relevant as well as pertinent.

And, if you believe in resurrection, ironic.