The campaign was planned by the ABVP, which was on the defensive after Rohith’s death, say former ABVP men 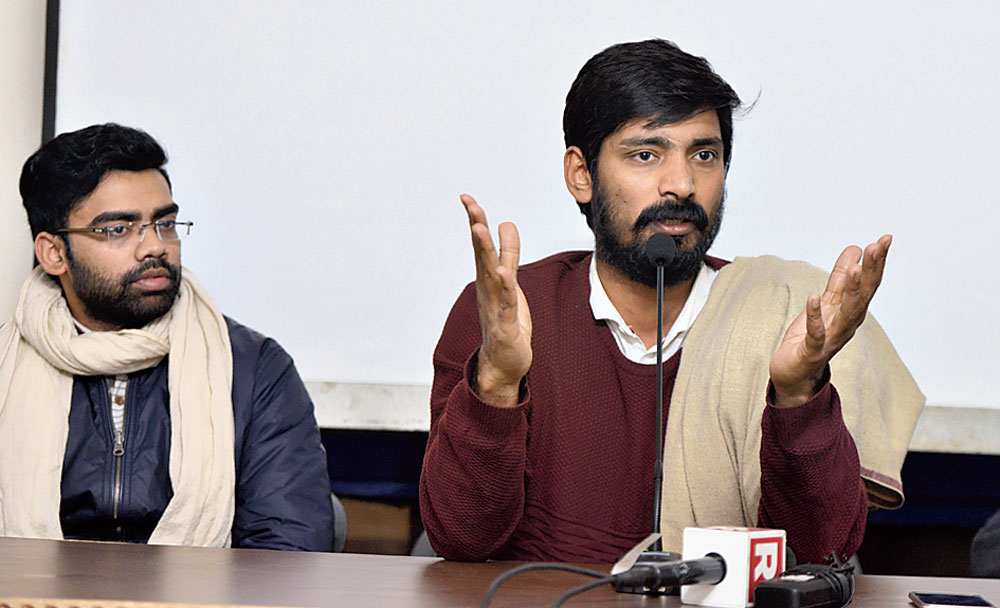 Two former members of the RSS-backed Akhil Bharatiya Vidyarthi Parishad have said the sedition chargesheet filed this week against 10 former and current students of Jawaharlal Nehru University — for slogans allegedly raised in 2016 — is aimed at diverting attention from the marginalisation of the oppressed, unemployment and undue interference in universities under the Narendra Modi government.

Jatin Goraya and Pradeep Narwal, the vice-president and joint secretary respectively of JNU’s ABVP unit in 2016 who have since switched sides, addressed a news conference on Wednesday at which they raised the suicide of Dalit scholar Rohith Vemula three years ago.

“We’ve decided to speak out now because of the media trial that has started. Three years back, TV channels defamed JNU students as terrorists in order to divert attention from Rohith’s institutional murder. The campaign was planned by the ABVP, which was on the defensive after Rohith’s death, and had asked Dalit members like us to go on TV channels and say that Rohith was working against India.

“Today, the chargesheet being filed days before Rohith’s death anniversary is to divert the attention of the people before the Lok Sabha elections away from the marginalisation of the oppressed by this government, and rising unemployment,” said Narwal, who is now a Congress activist in Haryana.

Rohith had committed suicide in January 2016 at Hyderabad University after he was suspended on the complaint of ABVP members.

Three JNU students were arrested in February 2016 after ABVP and a BJP MP complained that “anti-national” slogans were raised during a march against the cancellation of a “poetry reading” session on the third anniversary of the execution of Parliament attack convict Afzal Guru. The students were granted bail and a magisterial probe found that the TV footage relied upon by the police was doctored, and that JNU security staff had given false statements to implicate the students.

Earlier this week, the police filed the chargesheet in the case, accusing the students of sedition.

Goraya, now with the Bhagat Singh Ambedkar Students Organisation that was started by former JNU students and sedition accused Umar Khalid and Anirban Bhattacharya, said: “The most important thing is that the students shown shouting Pakistan Zindabad slogans in a Zee News video which was found to be fake (by the magisterial probe) were ABVP members. If the police thinks the video is genuine, why haven’t the police contacted them yet, or added their names to the chargesheet?”

Narwal and two other ABVP members publicly quit the organisation in the week following the police crackdown in 2016, citing differences over the stand taken on Rohith Vemula’s suicide. Goraya and the ABVP rebels symbolically burned verses of the Manusmriti, a Hindu legal treatise seen as the basis of caste hierarchy. Goraya also quit ABVP later that year. Both Narwal and Goraya are Dalits

ABVP leader Saurabh Sharma said on Wednesday: “These people have already joined Congress and this press conference was done on the

instructions from Rahul Gandhi. Because Rahul Gandhi had supported the urban Naxals who shouted anti-national slogans, that is why propaganda bases dirty politics is being played to divert the issue.”