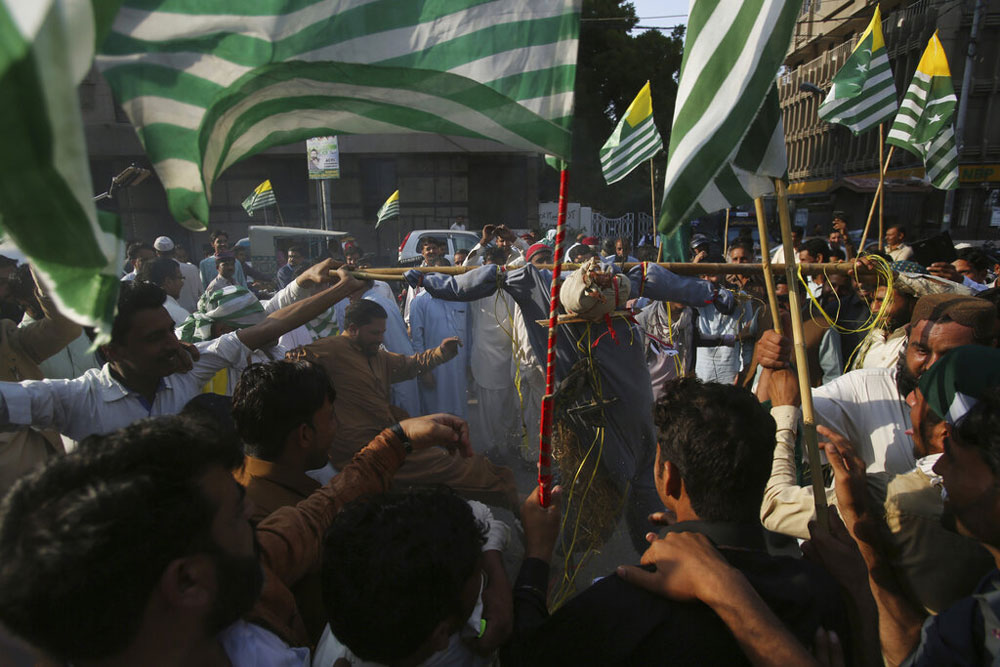 Pakistani protesters beat an effigy of Narendra Modi during a rally in Karachi on Monday.
(AP)
Reuters And Our Special Correspondent   |   Islamabad/New Delhi   |   Published 05.03.19, 09:38 PM

Pakistan said on Tuesday that it had begun a crackdown on militant groups, detaining 44 members of banned organisations including the son and brother of Jaish-e-Mohammed chief Masood Azhar.

The interior ministry said it was a move to “speed up action against all proscribed organisations”. Officials said it was part of a long-planned drive against militant groups, not a response to Indian anger over what New Delhi calls Islamabad’s failure to rein in militant groups operating on Pakistani soil.

The Jamaat-ud-Dawa, led by Mumbai terror attack mastermind Hafiz Saeed, and its wing Falah-e-Insaniat Foundation are among those formally placed in the list of banned organisations by Pakistan on Tuesday.

According to Pakistan’s National Counter Terrorism Authority list, which was updated on Tuesday, the two outfits were among 70 organisations proscribed by the interior ministry under the Anti-Terrorism Act, 1997.

Pakistan is facing pressure from global powers to act against groups carrying out attacks in India, including the Jaish, which claimed responsibility for the February 14 Pulwama terror strike.

In a sign that tensions are easing, Pakistan’s foreign ministry said a delegation would visit New Delhi next week to discuss an accord on Sikh pilgrims visiting holy sites in Pakistan.

The interior ministry said close relatives of Masood had been detained in “protective custody” as part of the crackdown. It named them as Mufti Abdul Raoof and Hamad Azhar, who one ministry official said was Masood’s son.

Some of the people detained were named by India in a dossier it gave to Pakistan after last month’s bombing, interior secretary Azam Suleman. “We are investigating them and if we get more evidence, more proof against them, they will be proceeded against according to law and if we don’t get any proof their detention will end,” Suleman said.

Sources in India said Pakistan’s action was not enough.

“This is not enough; it is old wine in a new bottle. Former President Pervez Musharraf had made a similar commitment in 2004. We have heard these words before. If this is indeed a ‘Naya Pakistan’ (New Pakistan) with a ‘naya soch’ (new thinking), then we want to see ‘naya action’ on the ground,” a source said.

This is the message that India is also sending out to other countries as the government engages with them to get Azhar listed as a banned terrorist by the UN’s 1267 sanctions committee.

The sources also cited Pakistan foreign minister Shah Mehmood Qureshi’s interviews to BBC and CNN over the weekend in which he said somebody in a position of authority had been in touch with Azhar. “This establishes that there are people in the Government of Pakistan who know where he is and are in touch with him,” a source said.

Saeed, who holds public gatherings in Pakistan, has been at the heart of criticism that Pakistan does not enforce its anti-militancy laws.

Pakistan has long used some groups to pursue its aims in the region, but it has denied New Delhi’s accusations it actively supports militants fighting Indian forces in Kashmir.

From time to time — usually as a result of outside pressure — Pakistan has cracked down on anti-India militants but most factions manage to survive and resume activities.

Two senior security officials in Pakistan said the government had drawn up plans to take over all madarsas linked to groups banned by the United Nations and to seize their assets and infrastructure.

At a later stage the government may consider recruiting some of the militants into paramilitary forces or seek other ways to find them jobs and incorporate them into normal society, the officials said.

The Jamaat-ud-Dawa is estimated to run about 300 madarsas.

Pakistani TV anchor and columnist Nazim Zehra, who attended a background briefing by Prime Minister Imran Khan and finance minister Asad Umar on Monday, said the government was determined that militants should put down their weapons and be demobilised.

Calming the storm: India should direct international pressure on Pakistan