Trinamul opposes but does not vote 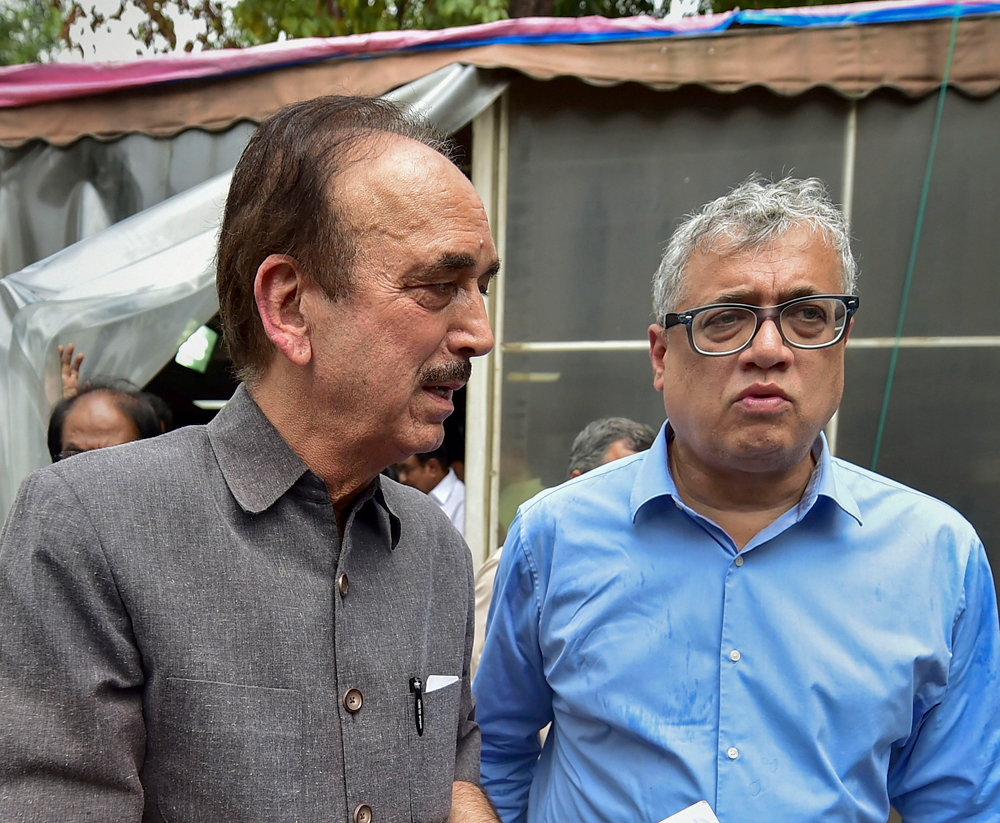 Senior Congress leader Gulam Nabi Azad and TMC leader Derek OBrien at a media address after Home Minister Amit Shah moved a resolution to remove Article 370 in the state of Jammu and Kashmir, in the Parliament during the Budget Session, in New Delhi, Monday, August 05, 2019.
(PTI)
Our Special Correspondent   |   Calcutta   |   Published 05.08.19, 10:39 PM

Trinamul MPs opposed the government’s twin strikes on Jammu and Kashmir in both Houses of Parliament but their walkout before the Rajya Sabha voted on the reorganisation bill raised questions.

Earlier, in a passionate speech in the Rajya Sabha, Trinamul MP and spokesperson Derek O’Brien had described the government’s decisions as “constitutional immorality” and “procedural hara-kiri”.

“The Right wing is calling this ‘the Final Solution’! What does that mean? In 1942, this was the code name for the Nazi plan for genocide, to murder the Jews,” O’Brien said.

His party colleague Sudip Bandyopadhyay demanded a discussion in the Lok Sabha on the reorganisation bill.

But the Trinamul MPs walked out of the upper House when the bill was tabled for voting. In the lower House too, Trinamul members joined several other Opposition parties in walking out when home minister Amit Shah moved a resolution to introduce the bill on Tuesday.

The walkout before the vote and the silence of chief minister Mamata Banerjee — who neither spoke nor tweeted on the subject — gave archrival CPM a chance to attack Trinamul in Bengal.

“What the Modi government did was unconstitutional…. The manner in which Trinamul protested suggests it has to do a tightrope walk,” CPM politburo member Nilotpal Basu said.

“We have always maintained that there is some form of understanding between Trinamul and the BJP.”

The CPM’s criticism, a source close to the chief minister said, reflected an “incorrect understanding of the situation”.

“Our leaders unequivocally opposed the Centre’s moves. We didn’t vote as we believe whatever they have done is constitutionally wrong…. Taking part in the voting would have given some sort of legitimacy to their moves,” he said.

The source added that the central government’s moves could later be legally challenged.

He argued that instead of criticising Trinamul, people should look at the Congress, the biggest Opposition party, which voted against the bill in the Rajya Sabha and walked out of the Lok Sabha when Shah moved the resolution for a discussion on Tuesday.

“With their lack of planning about how to challenge the government, they are hurting the cause of Opposition unity…. As the Congress is clueless, the Opposition parties are losing the chance of floor coordination to counter the Centre,” another Trinamul source said.

Although these Trinamul sources criticised the Congress’s role, their MPs had been seen together with their Congress counterparts in both Houses of Parliament.

Some Trinamul sources said the party’s actions in Parliament on Monday reflected a strategy to adopt a “balanced approach” on the issue.

“The JDU also walked out, which means we can have a truck on issues where they have problems with the BJP. Besides, it’s better to wait and assess the country’s mood first,” a source said.