Advertisement
Home / India / Maharashtra: MLAs of Shinde faction return to Mumbai
Election for Speaker to be held on Sunday

Earlier in the day, Uddhav Thackeray loyalist Rajan Salvi files his nomination as candidate of Shiv Sena-NCP- Congress coalition for the Speaker's election 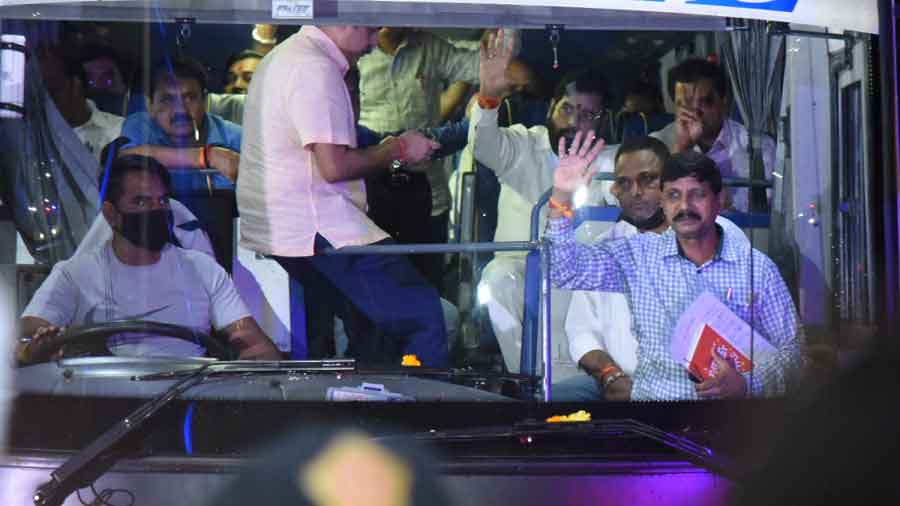 Maharashtra CM Eknath Shinde and rebel Shiv Sena MLAs leave from the airport in a bus, after arriving in Mumbai on Saturday
PTI Picture
Our Bureau And PTI   |   Mumbai   |   Published 02.07.22, 10:04 PM

Rebel Shiv Sena MLAs who support Maharashtra Chief Minister Eknath Shinde returned to Mumbai from Goa on Saturday evening on the eve of a special two-day session of the state legislature which will see election for the post of Assembly Speaker as well as a floor test of the new government.

NCP chief Sharad Pawar claimed that Narhari Zirwal, the deputy Speaker, can still perform officiating Speaker's duties even though a no-confidence motion is pending against him. The post of Speaker is vacant since last year.

Earlier in the day, Sena MLA and Uddhav Thackeray loyalist Rajan Salvi filed his nomination as the candidate of the Shiv Sena-NCP- Congress coalition for the Speaker's election, which will be held on Sunday.

He will face off with first-time BJP legislator Rahul Narvekar who also filed his nomination.

The MLAs were camping at a starred hotel in Dona Paula since June 29 after flying to Goa from Guwahati. Many of them had left Maharashtra on June 21 along with Shinde.

After landing in Mumbai, the rebel MLAs would be staying in a hotel before they attend the special session on Sunday morning, sources said.

In Mumbai, security had been tightened at the airport to avoid any untoward incident in the wake of the recent violent protests against rebel MLAs by Shiv Sena cadres in some parts of the state.

On Wednesday, Thackeray resigned as chief minister after the Supreme Court refused to stay the floor test ordered by the governor and it became apparent that Shinde had support of the majority of Sena MLAs.

Shinde took oath as CM the next day with BJP's Devendra Fadnavis as his deputy.

The post of Assembly Speaker has been lying vacant since Nana Patole of Congress resigned in February 2021 to become his party's state unit president. Deputy Speaker Narhari Zirwal was officiating as acting Speaker in the meantime.

NCP chief Sharad Pawar, meanwhile, said there would be a long legal battle ahead for deciding which faction of the Shiv Sena would be considered as the `original' party.

"The court will have final say is what I feel, he told reporters in Pune.

On Friday, Uddhav Thackeray, who heads the Sena, removed Shinde as `Shiv Sena leader' for "anti-party activities". MLA Deepak Kesarkar, a Shinde supporter, said the chief minister will challenge the decision in a court.

Earlier, Thackeray had appointed Ajay Chaudhary as the party's group leader in Assembly, replacing Shinde, which was approved by acting Speaker Zirwal.

On the other hand, several Independent MLAs who support Shinde also moved a motion of no-confidence against Zirwal.

Pawar claimed that the no confidence motion "does not restrict him (Zirwal) from serving the office" and he can still perform the duty of acting Speaker.

The Shiv Sena on Saturday said Fadnavis, a former chief minister, taking oath as deputy CM was a "shocking climax" to the drama of political instability in the state, and questioned the BJP why it did not show a "big heart" by honouring the pact of rotational CM in 2019 when the Sena had demanded the CM's post for two and a half years.

It's Shiv Sena vs BJP for Speaker's election