Sources say nearly 2,543 villages have been marooned while the overall death toll has increased to 16 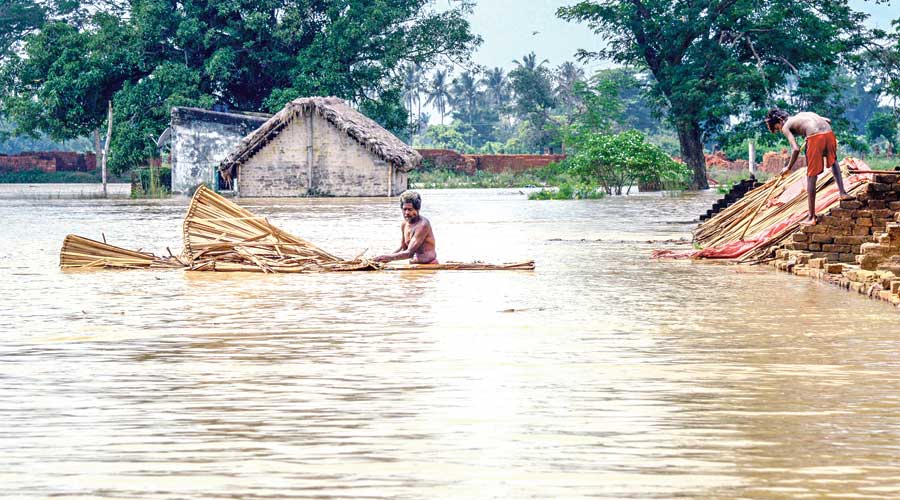 Residents shift from a flooded village near the banks of river Bhargavi in Odisha’s Khordha district on Saturday.
PTI
Our Correspondent   |   Bhubaneswar   |   Published 30.08.20, 12:33 AM

The Mahanadi river, the biggest in Odisha, is swelling by the hour, inundating more and more villages along its course.

Hundreds of villages have been marooned as water from the river breached the embankments at several points. All the tributaries of the river are in spate.

Rivers such as Baitarani and Brahmani have swollen, making the flood situation in the state critical with more than 11 lakh people being affected. Sources said nearly 2,543 villages have been marooned while the overall death toll has increased to 16.

On Saturday, the skeletal remains of two unidentified persons were retrieved from the banks of Baitarani river in Jajpur.

Special relief commissioner P.K. Jena told The Telegraph, “More villages are likely to be marooned. We have already shifted more than 70,000 people to higher places and the operation to move more people to safety is on. We have asked district collectors to remain on high alert and immediately send damage assessment reports.”

The state administration is expecting the flood situation in the Mahanadi system to worsen in the next 48 hours with more rains likely at various places, according to the meteorological department.

While Hirakud reservoir on Mahanadi in Sambalpur is releasing water through 46 sluice gates, rivers in the downstream have swollen and crossed the danger mark at several places.

Another two sluice gates of the reservoir are likely to be opened as more and more water keeps entering the dam from the upper catchment area because of heavy rains in the neighbouring Chhattisgarh in the last two days. Against its full capacity of 630 feet, the water level in the Hirakud dam has reached 627 feet.

A Odisha Fire Service team on Friday night rescued a person at Khandas village in Jajpur district who had been sitting atop a tree for eight hours.