Loya death natural and no merit in probe demand: SC

The Supreme Court on Thursday dismissed petitions seeking a probe into special CBI judge B.H. Loya's death, accepting he died of "natural causes" and accusing the petitioners of promoting "a political agenda" in the name of public interest. 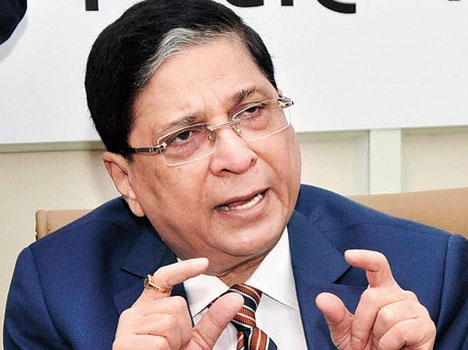 New Delhi: The Supreme Court on Thursday dismissed petitions seeking a probe into special CBI judge B.H. Loya's death, accepting he died of "natural causes" and accusing the petitioners of promoting "a political agenda" in the name of public interest.

"The documentary material... indicates that the death of Judge Loya was due to natural causes. There is no ground for the court to hold that there was a reasonable suspicion about the cause or circumstances of death which would merit a further inquiry," the bench of Chief Justice Dipak Misra and Justices A.M. Khanwilkar and D.Y. Chandrachud said.

"The conduct of the petitioners and the intervenors scandalises the process of the court and prima facie constitutes criminal contempt," the top court said but desisted from initiating contempt proceedings.

The Mumbai-based Loya was hearing a fake-encounter case in which current BJP president Amit Shah was an accused when he died at a wedding in Nagpur in December 2014, apparently after a heart attack. Shah was discharged in the same month.

Last November, Caravan magazine reported the Loya family's (recently retracted) suspicions over the death and their allegation about a senior judge trying to bribe Loya to let Shah off, prompting the batch of petitions seeking a court-monitored probe.

Following this, the Maharashtra government conducted a "discreet inquiry" through a senior police officer, who spoke to four of Loya's colleagues who were with him at the time of death, and ruled out foul play.

On Thursday, the apex court castigated the petitioners - Bombay Lawyers Association and others - for virtually branding Loya's four colleagues as "co-conspirators" for his death.

"There is absolutely no merit in the writ petitions. There is no reason to doubt the clear and consistent statements of the four judicial officers," Justice Chandrachud, who wrote the judgment, said.

"By casting unfounded aspersions... the petitioners have revealed the real motive of these proceedings, which is to bring the judiciary into disrepute on the basis of scurrilous allegations."

"The video recording of an interview given to Caravan by the father and sister of judge Loya was also handed over to the court on a pen drive. The members of the family of judge Loya have disassociated themselves from the statements attributed to them in the Caravan publication," the court said.

"The video recording, which we have seen, contains snippets of an interview. Evidently, only a part of the interview has been produced. The allegations against the (then) chief justice of Bombay High Court are hearsay."

The court accused the petitioners of misusing the avenue of public interest litigation "to settle extra-judicial scores".

"It is a travesty of justice for the resources of the legal system to be consumed by an avalanche of misdirected petitions purportedly filed in the public interest which, upon due scrutiny, are found to promote a personal, business or political agenda," it said.

"This has spawned an industry of vested interests in litigation. There is a grave danger that if this state of affairs is allowed to continue, it would seriously denude the efficacy of the judicial system...."

The court added: "Political rivalries have to be resolved in the great hall of democracy when the electorate votes its representatives in and out of office."