Most students and teachers had opposed the process citing the digital divide, that is, the lack of quality devices and Internet connectivity among rural and poor students 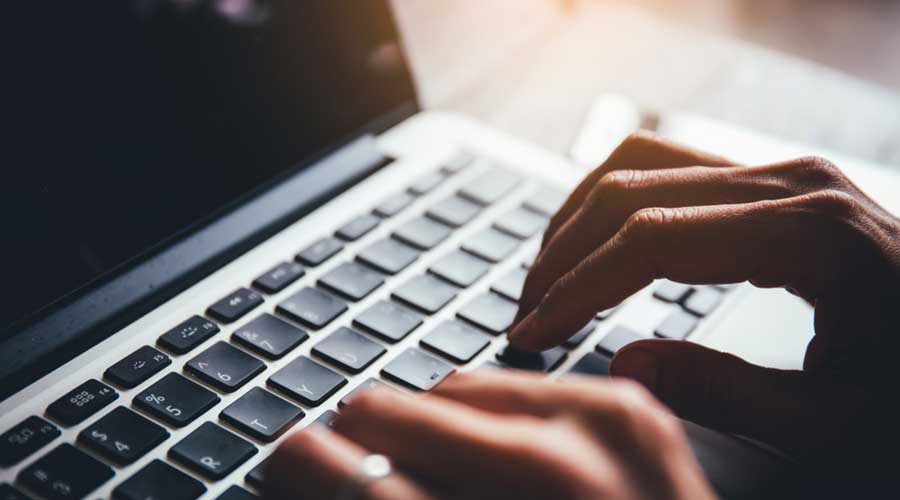 However, the university went ahead with its Open Book Examination programme following a clearance from Delhi High Court.
Shutterstock
Basant Kumar Mohanty   |   New Delhi   |   Published 11.08.20, 01:52 AM

Delhi University on Monday kicked off its final-semester undergraduate and postgraduate exams in the online mode amid complaints of examinees struggling to upload the answer scripts and visually challenged students failing to find scribes.

Most students and teachers had opposed online exams citing the digital divide, that is, the lack of quality devices and Internet connectivity among rural and poor students.

However, the university went ahead with its Open Book Examination programme following a clearance from Delhi High Court.

The Centre and the University Grants Commission want all the universities to hold final-semester exams by September, offline or online. So far, only individual institutes and smaller universities had done so.

Delhi University, with its about 70 affiliated colleges, has rural and urban students from across the country. It had asked the examinees to download the question papers, write the answers on plain paper and upload their photos on the examination portal.

The first paper for the BSc honours courses began at 7.30 in the morning. By 10.30am, reports were pouring in about students’ difficulties in uploading the answers.

“I uploaded my answers but received no acknowledgement. I eventually sent images of the answer paper as attachments to the email addresses of DU and my college,” a student, who did not wish to be identified, said.

DU executive council member Rajesh Jha said that many students from rural ar-eas and Jammu and Kashmir could not take the exams “because of a lack of proper gadgets or high-speed Internet”.

Among the worst affected were visually challenged rural students, who could not arrange for scribes in their villages.

“We have been highlighting the digital divide for months,” Jha said.

He said the lack of invigilation that online exams from home entail leaves a lot of scope for malpractice and impersonation.

The university, which has not revealed the percentage of students who were able to take the online exams, will later hold offline exams for those who could not.

Abha Deb Habib, assistant professor at Miranda House College, said that scheduling the test at 7.30am had inconvenienced students who took the exam from common service centres.

“In a WhatsApp group of my students, a large number among the 42 students wrote that they had not received confirmation that their upload had been accepted,” Habib said.

She criticised the university for asking the students to mention their names on the answer papers.

“The students are never asked to mention their names. A name can indicate the region the student comes from, or the student’s caste or religion. It’s better if names are not asked,” she said.

Normally, before an exam, the university issues each examinee with a roll number, but this was not done this year because of the disruption caused by the pandemic.

An email and a text message sent to vice-chancellor Yogesh Tyagi seeking his comments on the students’ complaints and the teachers’ concerns evoked no response.

The academic session at DU and some of the IITs began from Monday, and in the online mode. Other institutions funded by the central government are to start their classes online later this month.

Rudrashish Chakraborty, a teacher at Kirori Mal College under DU, said eye contact in the classroom was the best indication a teacher could receive about the level of a student’s absorption in the lesson.

“Teaching is not about delivering a lecture alone; it’s more about the connect the teacher has with the students, which helps them understand concepts better,” he said.

“In online teaching, the students are mostly listeners whose faces are not visible. This is not an effective mode.”

IIT Bombay, which began online classes on Monday, has decided to supply a laptop with broadband connectivity to each poor student.