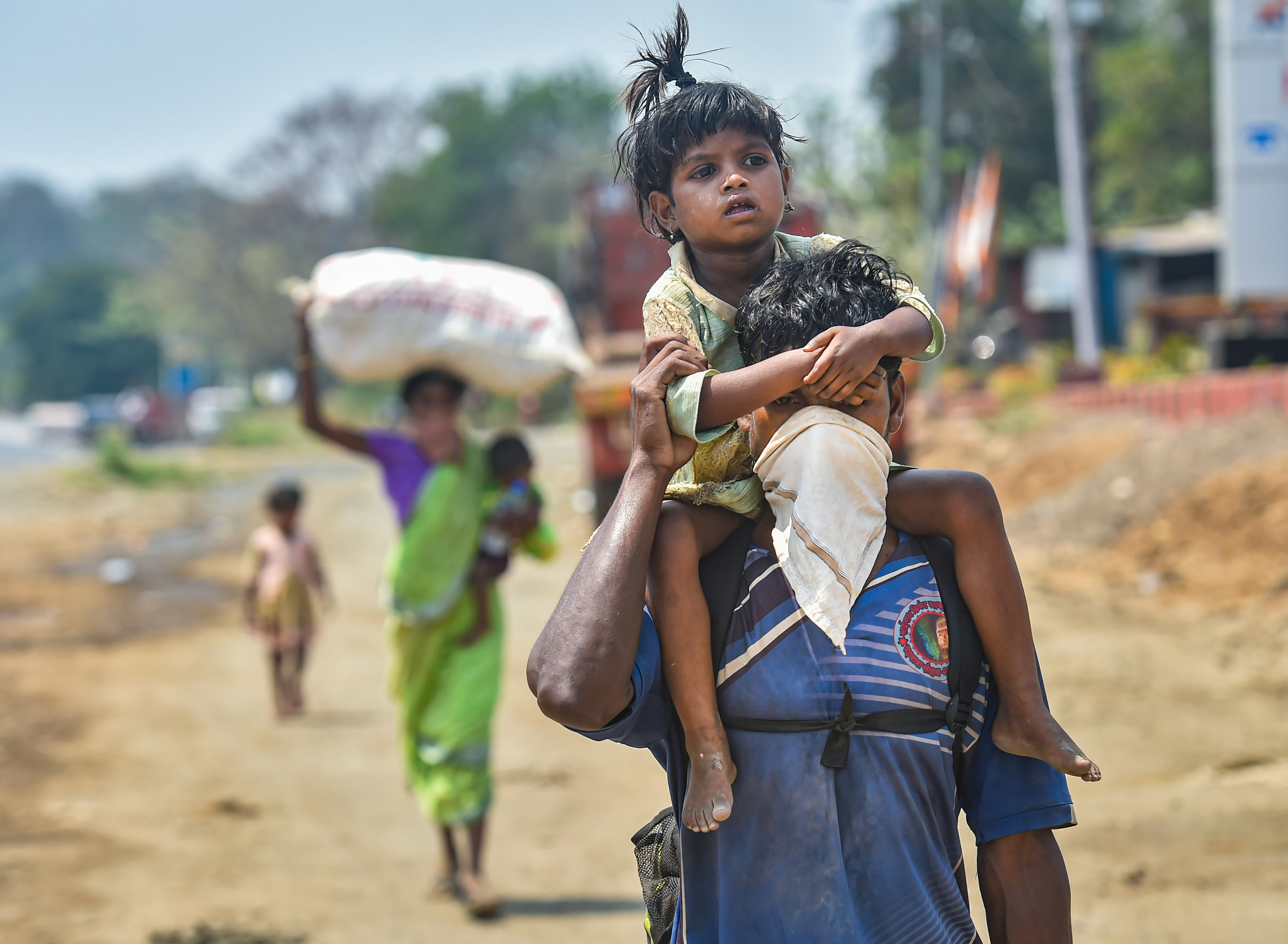 A migrant worker along with his family walks along the Mumbai-Ahmedabad highway, following the coronavirus lockdown, in Palghar, Monday, March 30, 2020.
PTI
Prabhat Patnaik   |   Published 09.04.20, 07:13 PM

A very distinguished virologist whom I happen to know believes that the lockdown in India was an overreaction. His argument is that since the coronavirus was coming to India from outside, testing and quarantining people coming from abroad, and those with whom they might have been in contact within the country, should have been quite sufficient to prevent its spread. To lockdown a whole country, instead of isolating such enclaves, was like using a sledgehammer to crack a nut.

While I respect his views I am in no position to make a judgement on this issue. But I certainly believe that imposing a lockdown at four hours’ notice and with zero preparation was shockingly irresponsible, especially when economists and social activists had been urging the government to provide a safety net for the working poor even when we had only “social distancing” and not a lockdown.

Since a lockdown immediately means a loss of income for lakhs of workers, including migrant workers living in rented accommodation in faraway towns, the announcement of lockdown should have been accompanied simultaneously by three other announcements: a moratorium on eviction of tenants, an income support for every household, and doorstep delivery of provisions (or something akin to it).

These doubtless involve extremely difficult logistics, but a lockdown should not have been announced until these had been sorted out; and their announcement should have been simultaneous with that of the lockdown. When Nirmala Sitharaman finally announced a package of ameliorative measures, it was already 36 hours into the lockdown, by which time numerous migrant workers had already been evicted; they were already on the roads trudging home, or crowding around bus stands, perforce flouting the lockdown. Besides, the package she announced was unbelievably paltry.

An illustration will suffice. Economists and social activists had been demanding a universal income support of Rs 7,000 per household per month for at least two months for the bottom 80 per cent households, to tide over the crisis. Similar demands had been made by trade unions, women’s organizations and many political parties; the sums they demanded differed, but only marginally. The total sum involved in giving Rs 7,000 per household per month for two months to 80 per cent of households would have come to Rs 3.66 lakh crore. If we add up all cash transfers announced by Sitharaman, the amount comes to a mere Rs 34,000 crore, which is less than 10 per cent of what civil society organizations were asking for.

Besides, her package almost entirely excludes the migrant workers from its ambit. The only element of it that could potentially help them, namely the enhanced ration of foodgrains, is hardly likely to do so, since many of them, if they have a ration card at all, would have it where they come from rather than where they stay.

Nothing illustrates better the government’s lack of clarity over migrant workers than the fact that when the Union home ministry was ordering migrant workers, who were already on the roads, to be immediately quarantined wherever they were, and not return home, the Uttar Pradesh government was arranging buses to take them home. And several Delhi government officials are now facing disciplinary action from the Centre for arranging transport for migrant workers.

The question arises: how could the Central government impose such a thoughtless lockdown? And let us be clear, the Central government alone was responsible for it as the states were not even consulted over it. A part of the answer lies in Narendra Modi’s penchant for ‘effect’, to ‘shock and awe’ people by the sudden and dramatic nature of his decisions. In this process, ironically, the more inconvenienced the people are, the greater the ‘effect’, the more striking the image of a prime minister who apparently does not shirk from taking ‘unpleasant’ decisions in the ‘interest of the nation’. Such decisions being invariably unplanned, since planning is a prosaic act while ‘shock and awe’ is better for image-making, have disastrous consequences.

The other reason for thoughtless action is the sheer lack of awareness on the part of the State of the problems of the working poor. This afflicts not just the executive but also the judiciary. The government attempted to foreclose all criticism against itself, by getting the Supreme Court’s consent to its muzzling whatever remains of the independent media, on the ground that ‘fake news’ had caused the migrants’ exodus. It thus portrayed the migrant workers as being puerile enough to start trekking hundreds of miles just because someone floated fake news. Significantly, however, this trivialization of migrant workers’ problems was accepted by the Supreme Court. While mercifully preventing media-muzzling, the Supreme Court appears to have subscribed to the view that fake news was a factor behind the migrants’ exodus.

Such unawareness afflicts also the elite at large, which was taken utterly by surprise when thousands of migrant workers came out of their places of residence in defiance of the lockdown. Many in the elite even attributed this fact to sheer unreasoning panic on the part of the migrant workers rather than to any objective necessity.

This unawareness is not just about migrant workers but extends to the working poor in general. Consider Sitharaman’s package about Mahatma Gandhi National Rural Employment Guarantee Scheme workers. She announced a rise in MGNREGS wages from Rs 182 to Rs 202, and calculated the gain from it as Rs 2,000 per worker. This presumes 100 days of employment per worker, which is patently untrue: in fact last year less than 7 per cent of workers got this much employment. Besides, the wages she announced were lower than what the ministry of rural development had already announced a few days earlier, and lower too than what the vast majority of states already give to MGNREGS workers. And all this is in addition to the fact that in several states at present, all MGNREGS work has been stopped because of the lockdown. The finance minister’s unawareness of ground realities is thus quite remarkable.

This lack of knowledge about the working poor has of late been compounded by sheer administrative inefficiency, which inevitably arises when criticism of the government is not openly aired. Amartya Sen had put forward the argument that a free press was a defence against famines, as any food shortage anywhere got immediately reported, and governments were forced to act to escape opprobrium. This point about a free press has a more general validity. By contrast if the media are docile and suppress facts unpalatable to the government, then the question of opprobrium for the government in the event of poor administration does not arise; lethargy and inefficiency necessarily creep in.

A false analogy is often used to argue for curbing media freedom at present, namely that this crisis is like a war, and any weakening of the people’s will must be avoided. Such weakening, it is argued, would happen if the media had unfettered freedom, for then disenchantment and fake news will take their toll. This analogy, however, is a false one. In a war there is a human enemy which can plant fake news and take advantage of media information to tailor its strategy. But a virus does not plant or follow news; the fight against it requires not will, but correct application of science. This fight requires maximum possible candour and openness.