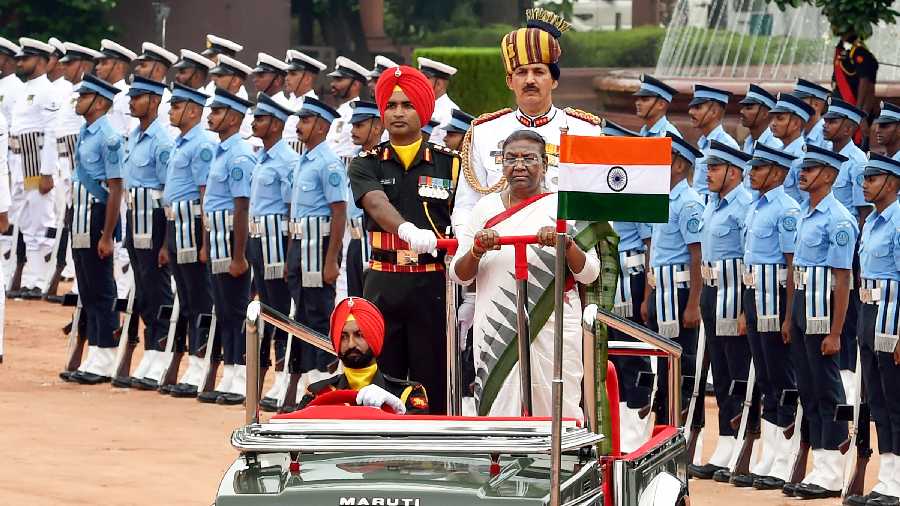 President Droupadi Murmu reviews a guard of honour presented by the Tri-services personnel at the forecourt of the Rashtrapati Bhavan, in New Delhi
PTI picture
Our Bureau, PTI   |   New Delhi   |   Published 25.07.22, 04:13 PM

Political leaders cutting across party lines on Monday congratulated Droupadi Murmu on being sworn in as the country's 15th President with Prime Minister Narendra Modi describing it as a "watershed moment" for India, especially for the poor, marginalised and downtrodden.

The country's first tribal to occupy the highest Constitutional position and the second woman in the post, Murmu is India's youngest president at 64 and the first to be born after Independence,

Congratulating Murmu, Vice President M Venkaiah Naidu said her election to the highest office is a testimony to the vibrancy and strength of Indian democracy.

"My best wishes to her for a successful and fulfilling tenure as the First Citizen of India," he said.

Wishing her the best for a fruitful tenure, Modi said the entire nation watched with pride as she took the oath.

Modi said,"the entire nation watched with pride as Smt. Droupadi Murmu Ji took oath as the President of India. Her assuming the Presidency is a watershed moment for India, especially for the poor, marginalised and downtrodden. I wish her the very best for a fruitful Presidential tenure."

"In her address after taking the oath, President Droupadi Murmu Ji gave a message of hope and compassion. She emphasised India's accomplishments and presented a futuristic vision of the path ahead at a time when India is marking Azadi Ka Amrit Mahotsav," he said.

Her first address to the nation as "people's president" encapsulated not just the significance of this truly historic moment but the spirit of New India, Nadda said.

"Many congratulations to Smt Droupadi Murmu on taking oath as the 15th President of India. I am sure that your tenure will take the pride of the country to new heights. Today's historic day is a wonderful example of empowerment and 'Antyodaya' of every section following democratic values," Shah tweeted in Hindi.

Defence Minister Rajnath Singh said it is a remarkable day in the history of the Indian Republic and expressed confidence that her rich legislative and administrative experience will benefit the nation.

"I am sure that the nation would stand to benefit from your services as the President of this great country and I wish you all the very best," Stalin said in his message.

Senior Congress leader and former Union minister P Chidambaram said it is "a proud moment" in India's history to see a lady born to a tribal family in a remote village of Odisha ascend to the office of President of India.

Nationalist Congress Party (NCP) leader Sharad Pawar congratulated Murmu and expressed confidence that she would remain committed to the protection of India's democracy, constitution and law, and will make the country more proud during her tenure.

In her speech after taking the oath, Murmu touched on various issues, including the government's digital India and vocal for local' initiatives and its handling of the Covid pandemic.

She also paid tribute to India's freedom fighters and said the country will have to move quickly on the twin tracks of sabka prayas' (everyone's effort) and sabka kartavya' (everyone's responsibility) to fulfil their expectations.

Murmu, who started public life as a councillor and later became Jharkhand governor, said she wanted to reassure all Indians, particularly the youth and women, that their interests will be supreme for her as president.