Lalu Prasad set to return to Patna after three years 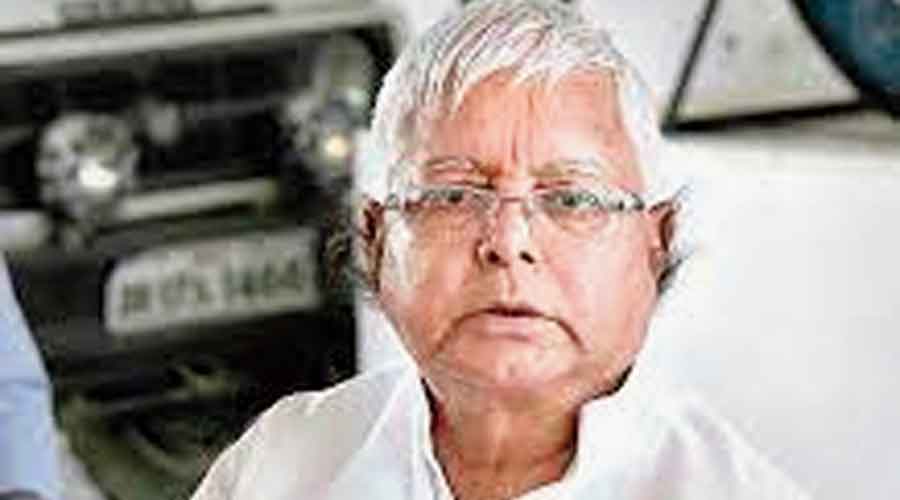 Rashtriya Janata Dal (RJD) president Lalu Prasad is expected to return to Patna on Sunday after a gap of over three years.

His wife Rabri Devi and daughter Misa Bharti will accompany him on the flight from Delhi.

The imminent arrival at the time of bypolls to two Assembly seats has heated up politics in the state.

According to RJD sources, the doctors have granted Lalu permission to travel to Patna and flight tickets have been booked.

The RJD chief is suffering from severe diabetes, kidney and heart ailments. He has been mostly under treatment at various hospitals in Ranchi, Mumbai and Delhi after being convicted and incarcerated in the fodder scam cases. He was granted bail in April, but was stuck in Delhi for health reasons.

“There is a strong possibility of our party chief coming to Patna in a day or two. Let him come. We will inform you,” Lalu’s confidant, advocate and RJD national general secretary Bhola Yadav told The Telegraph.

Bhola added that the possibility of Lalu campaigning for the bypolls to the Tarapur and Kusheshwar Asthan constituencies was slim but the final decision would be taken after his arrival.

“One thing is for sure, Laluji will not opt for digital campaigning in the bypolls. At present, his son and RJD leader Tejashwi Prasad Yadav is spearheading the campaign,” Bhola said.

The RJD chief’s return is being considered crucial at this juncture for two reasons.

The Congress has quit the Opposition Grand Alliance, has fielded candidates for the two seats and has fielded young and dynamic leaders such as Kanhaiya Kumar, Hardik Patel and Jignesh Mevani to campaign in the bypolls. They are being seen as a threat to Tejashwi.

The second reason is that Lalu’s eldest son and Hasanpur MLA Tej Pratap Yadav, in his struggle for power with Tejashwi, is continuously rebelling against the party.

Lalu’s presence in Bihar, even if he does not campaign physically in the bypolls, will boost the RJD’s chances in both the seats.

Tarapur and Kusheshwar Asthan were won by chief minister Nitish Kumar’s Janata Dal United and fell vacant when their representatives passed away earlier this year.