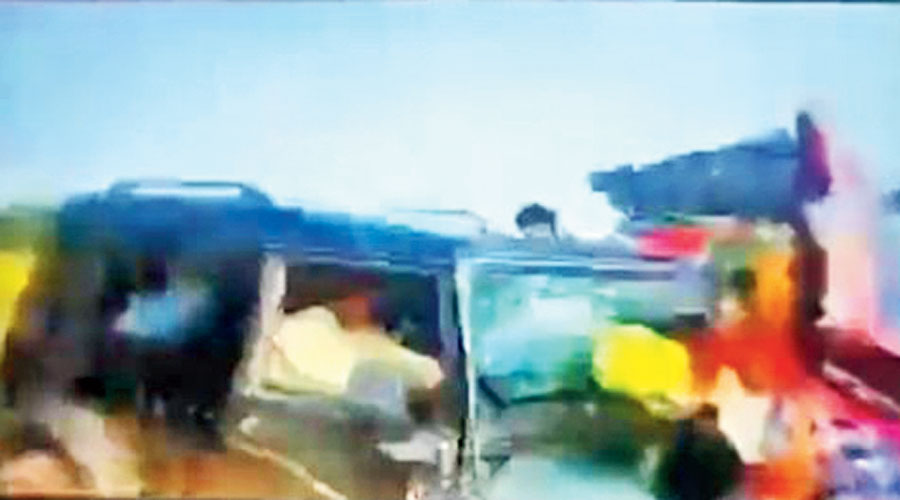 The emergence of a video clip that shows a vehicle ploughing through people has changed the mood of the farmers.

The Samyukta Kisan Morcha (SKM) on Tuesday made it clear that the farmers would continue to protest in Lakhimpur Kheri till Union minister of state for home Ajay Misra Teni is dismissed and his son and accomplices are arrested.

In a statement, the SKM said the video shows “the minister’s son Ashis Misra was indeed driving the ‘Thar’ vehicle, from which he later got down and ran away, with cover and support provided by the police, and while firing on protesters. The journalist Raman Kashyap’s family is pointing out that he also got killed by vehicles crushing him”.

The SKM is also not backing away from its assertion that one of the farmers had died of a gunshot wound.

“Gurvinder Singh s/o Sukhwinder Singh (20 years) from Mukronya Nanpara died because of bullet injury. The first post-mortem did not confirm this, however. In his case, a re-post-mortem will be conducted by a team of doctors from AIIMS, BHU, PGI and a senior forensic doctor in Bahraich, under video recording and in the presence of SKM representatives,’’ the statement said.

About the agreement reached with the Uttar Pradesh administration on Monday in a joint media conference by western Uttar Pradesh farm leader Rakesh Tikait and additional director-general (law and order) Prashant Kumar, the SKM said it was only to pave way for the last rites to be performed as the farmers were sitting in protest with the bodies.

The key demands of the SKM remain — the immediate arrest of Ashis and his accomplices, and the dismissal of Teni and Haryana chief minister Manohar Lal Khattar from their posts immediately. The Union minister and the chief minister are being targeted for “inciting” their party workers against the protesting farmers.

Tikait has since come under considerable criticism from several quarters, some of whom suggested he had compromised too soon while others saw a possible realignment of forces in Uttar Pradesh because he did the joint media conference and given his earlier political leanings.

Several SKM leaders rubbished this narrative being played out on social media, maintaining that other leaders from the movement were also part of the negotiations with the administration and the agreement was struck in consultation with the local unions and the family members of the victims.

“For anyone to say Rakesh Tikait has compromised is unfair. There were a whole lot of other SKM leaders also involved besides local unions. Talks with the UP administration paved the way for the last rites. The police also agreed to do a post-mortem which will provide us the legal documents to carry this movement further. It is unfair to say that justice has been compromised. Larger justice issues remain,’’ Kavita Kuruganti of Mahila Kisan Adhikar Manch, an SKM constituent, told The Telegraph.

An All India Kisan Sabha leader told this newspaper that their members also managed to reach Lakhimpur Kheri by Monday morning, pointing out that most farmer union leaders managed to reach the area despite the barricades, except Gurnam Singh Chaduni.

Further, he said, what was most important was to ease the tension in the area and the agreement made that possible as the process for the last rites commenced after the media conference.

Since Sunday, the SKM leadership has been appealing for calm, underscoring the fact that it is the peaceful nature of their protest that has sustained it for over nine months and limited the options with the government to break the struggle.