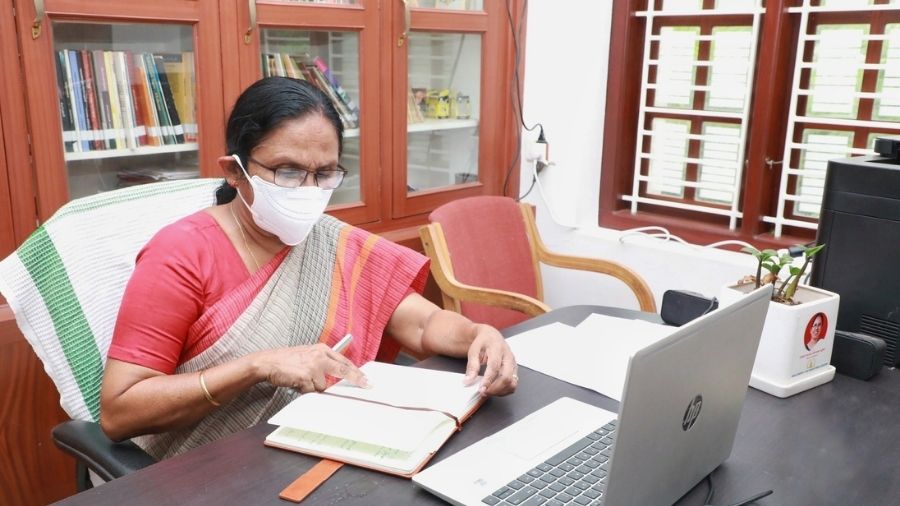 “There is no need to be emotional…. I became the minister earlier because of the party’s decision. I have absolute satisfaction in what I have done. I am confident that the new team can perform better than me,” K.K. Shailaja said
File picture
Anita Joshua   |   New Delhi   |   Published 19.05.21, 01:26 AM

K.K. Shailaja, Kerala’s celebrated health minister who had deftly managed two Nipah outbreaks and the coronavirus pandemic, has been dropped from the ministry to be sworn in on Thursday as part of an overhaul, triggering widespread dismay and earning chief minister Pinarayi Vijayan considerable flak.

Although Shailaja, popularly called Teacher because she is a retired schoolteacher, has not been singled out as the CPM’s state committee has unanimously decided to remove all existing ministers while retaining Vijayan alone, her exclusion drew the maximum attention as she had over the past year been the face of Kerala’s much-appreciated battle against Covid-19.

What made things worse for Vijayan was the decision to include his son-in-law Mohammed Riyaz and CPM acting state secretary A. Vijayaraghavan’s wife R. Bindu in the ministry. Both are long-term party workers and have worked their way up the ladder but their inclusion in the ministry did raise eyebrows.

Together, these three decisions have eclipsed the swearing-in of the first consecutive LDF government in 41 years, breaking the four-decade tradition of Kerala alternating between the CPM and Congress-helmed combines every election.

Add to this the criticism over Vijayan making an exception in the strict Covid protocol for the swearing-in ceremony by planning a gathering of 500 people in state capital Thiruvananthapuram which is under a strict lockdown.

The new ministerial portfolios have not been announced yet. She (Shailaja) was, however, entrusted with the position of party whip, a CPM statement said.

For the better part of Tuesday, the CPM was at the receiving end of bruising allegations of sexism and nepotism, and allegations that Shailaja’s increasing popularity had come in the way of the party’s distaste for the personality cult.

In the evening, Shailaja, 64, herself sought to put the controversy to rest with a statement to the media.

“It’s good that a new cabinet is coming. Everyone should get an opportunity. The party decided to make me minister the last time. It was a very good experience for me. But, there are many others in the party also.”

“There is no need to be emotional…. I became the minister earlier because of the party’s decision. I have absolute satisfaction in what I have done. I am confident that the new team can perform better than me,” she said.

“Not the individual but the system is showcasing the fight against the pandemic. I am happy that I could lead the team,” Shailaja added.

What the CPM failed to explain was how the decision to drop all ministers — particularly Shailaja — fits in with the promise of continuity with which it had sought re-election.

The management of the pandemic in Kerala was a major talking point of the elections and Shailaja’s role was acknowledged in her constituency Mattannur, which she won with the biggest margin ever in the state’s electoral history.

Insiders maintained that the CPM was strictly following the decision not to repeat any minister except for the captain of the ship, Vijayan, whose control over the party has now strengthened further after the Assembly elections; particularly given the Left’s rout in Bengal.

Ahead of the elections, Vijayan had decided not to give tickets to anyone who had had two terms in the legislature — ministers included.

“When the party has decided to drop all other ministers, it would have been extraordinary to allow Shailaja to continue. That would be tantamount to the party succumbing to a media-created public opinion,’’ said a CPM leader, adding that her success as health minister was primarily because of a robust public health system that was already in place.

CPM general secretary Sitaram Yechury told The Telegraph that the decision to drop all outgoing ministers was taken by the party state committee.

“This was discussed in the state committee and it took a unanimous decision,” he said, adding that the central leadership does not come into the picture unless its intervention was sought.

Parallels were drawn between Shailaja and K.R. Gouri Amma, the doughty communist who died last week at 103. She had parted ways with the CPM on being denied the chief minister’s post in 1994 after being projected as one in the elections.

Shailaja never gained that stature but the media exposure of the past year had made her a larger-than-life figure that apparently did not go down well with many in the CPM, which does not allow personality cults to develop barring some strongmen.

Social media users responded sharply to Shailaja’s omission. They pointed out that it would not be good to change her at a time Kerala was witnessing an unprecedented surge in coronavirus cases. Many people made Shailaja’s photo their WhatsApp display picture to show solidarity with her.