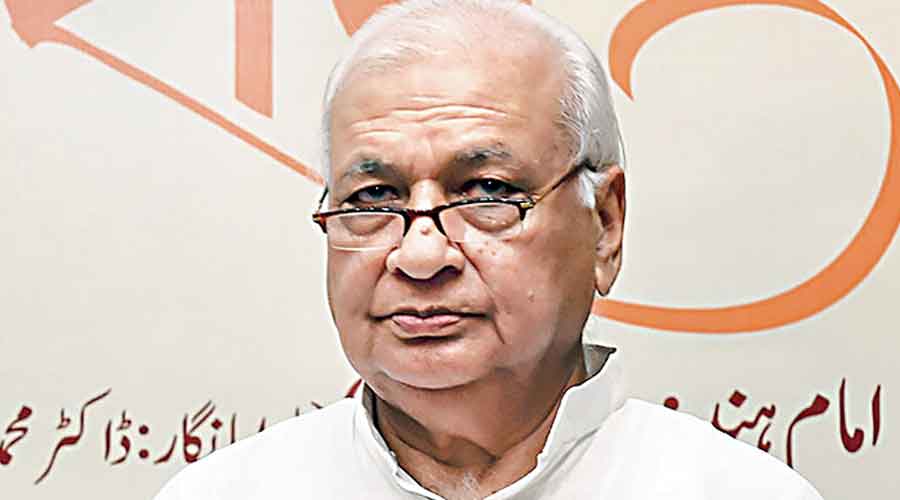 The friction between Bengal Raj Bhavan and Nabanna is well-known but it looks anodyne in front of what has been unfolding in Kerala.

Kerala governor Arif Mohammed Khan, an erstwhile poster boy of the secular camp who famously opposed the Rajiv Gandhi government’s Muslim Personal Law Bill after the Shah Bano case verdict and party-hopped to eventually reach the BJP, has been accused of holding the state government to ransom.

Worse, Marxist chief minister Pinarayi Vijayan, whose clout is considered unrivalled in the state after he led the Left Front to an unprecedented consecutive second term this summer, is said to have succumbed to the blackmail and transferred an IAS officer.

In a high-voltage political drama, governor Khan on Thursday refused to sign the policy statement of the government, which he was to read out in the Assembly on the first day of the budget session on Friday.

The government had to obtain the governor’s signature before getting the speech printed for distribution among MLAs. Even the chief minister who had called on the governor to mollify him was rudely turned back.

The apparent reason: the governor was upset over a dissent letter that was issued by the Left Front government, along with its consent, on the appointment of a known BJP activist as his additional personal assistant. The governor’s pick, Hari S. Kartha, is a former editor of the RSS-backed Malayalam daily Janmabhumi and a former executive committee member of the state BJP.

The state government, while ratifying the governor’s request for the appointment of Kartha, had pointed out that it was not customary to appoint active members of political parties to the governor’s staff.

The government letter said: “There is no precedent of appointing persons who are actively involved in politics or who owe allegiance to political parties or organisations having links with political parties, in the Raj Bhavan and it is desirable to adhere to the prevailing norms.”

The order said the government had accepted the proposal only because the governor had expressed his desire to appoint the particular person (Kartha) as his additional personal assistant. Kartha’s term will be co-terminus with that of Khan.

The letter, containing the decision of the state government, was signed and submitted to the Raj Bhavan by senior IAS officer K.R. Jyotilal in his capacity as public administration secretary.

The Opposition Congress had alleged that the appointment was part of a “quid pro quo between the governor and the LDF on many issues”. A day earlier, the governor had given his approval to a controversial ordinance clipping punitive powers of the state Lokayukta, ignoring the Opposition’s pleas not to do so.

On the question of his approval to the policy address, the governor had allegedly set a bizarre condition that the government summarily remove the officer who signed the letter (Jyotilal) before he puts his signature on the dotted line. It is said that the governor felt “humiliated” by the letter.

This was something unheard of since the governor is bound by his constitutional duty to approve the policy statement that the cabinet had forwarded to him.

Even as constitutional experts were pointing out that the governor will have to be replaced if he refuses to sign the policy statement, the government issued an order transferring Jyotilal to another department and appointing a new officer in his place.

Then the chief secretary, along with the new public administration secretary, called on the governor to inform him of the change, after which Khan put his signature on the policy document.

It is said that the governor had also sought an assurance from the government to stop giving life-time pensions to personal staff of ministers, a practice followed by successive governments in the state for years.

These appointments, the governor claimed, were tantamount to political appeasement and aimed at cadre building. Coming from someone who had just made a political appointment in his staff, the statement sounded rich.

On Saturday, Khan said no one had the right to control the Raj Bhavan and it was his duty to ensure business was conducted according to constitutional provisions.

He slammed the practice of appointing a large number of party cadres by ministers in their staff.

“The methodology is that after two years, one set is made to resign and another group (takes charge), because they are all cadres of the party. So they are working for the party and the state is paying them…. It is like looting the money of Kerala,” Khan said.

“I was insisting that the government should scrap this scheme through which political cadres are receiving money from the state exchequer. I was trying to make the chief minister understand that this scheme has to be scrapped and should be included in the policy address. Finally I had to sign (the policy address),” he added.

Khan said he would pursue the matter. “I am going to call the file and pursue this matter. I have every authority with me to take action in this matter. You will see action, if not within a week, it won’t take even a month,” he said.

But the larger question remains: why did the government cave in and sacrifice an IAS officer when the decision to point out the incongruity in appointing a party man in the governor’s staff was taken by the cabinet?

The CPM argument that by conceding to Khan’s demand to shunt the officer the government had succeeded in exposing the governor does not hold much water.

It was a golden opportunity for the Left government to pile heat on the Centre. That too at a time when almost all the Opposition-ruled state governments are at loggerheads with their governors who are either from the RSS cadre or were active BJP members.

Voices of support for MediaOne