While none doubts his victory, the CM’s campaign style would suggest that he is leaving no stone unturned 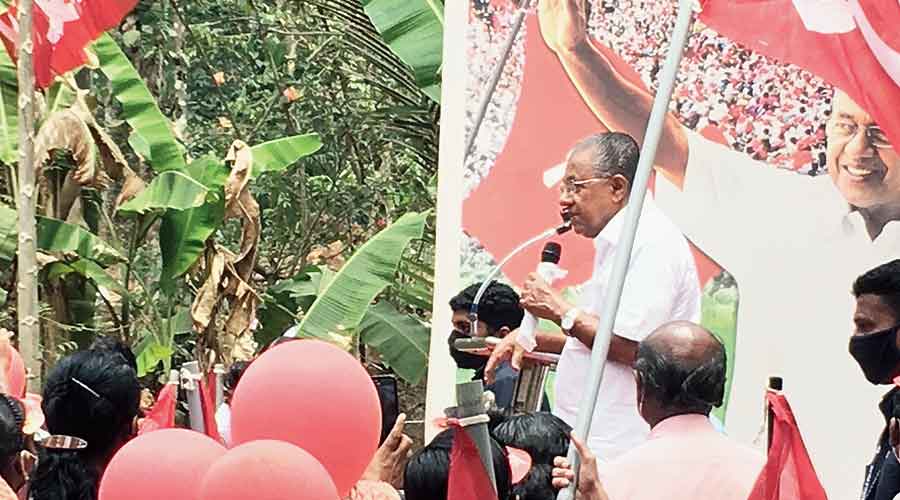 A distinct feature of the Dharmadam Assembly constituency where Kerala chief minister Pinarayi Vijayan is seeking re-election is the sparse use of his posters and banners.

But for neighbourhoods where he addresses corner meetings, there is hardly any publicity material for the CPM leader whose popularity has never been challenged on his home turf comprising Pinarayi village in Kannur district.

While none doubts his victory in Dharmadam, Vijayan’s campaign style would suggest that he is leaving no stone unturned while his motorcade weaves through narrow stretches of village roads in the constituency. He had romped home in the 2016 polls by defeating Mambaram Divakaran of the Congress by 36,905 votes.

What would have been a cracker of a contest with the other firebrand from Kannur, Lok Sabha member K. Sudhakaran of the Congress, coming close to taking the field in Dharmadam, Vijayan is set for an easy ride with the Congress fielding Kannur district general secretary C. Raghunath after much dilly-dallying. The BJP has nominated former state president C.K. Padmanabhan who hasn’t succeeded in making any mark in the CPM pocket borough.

After a brief campaign during the early days of electioneering, Vijayan had set out on a gruelling state tour covering 14 districts in 14 days. He returned to focus on some of the key constituencies in Kannur and Kasaragod districts and then moved to Dharmadam on Thursday where he would spend the rest of the days until the close of campaign on April 4.

The 75-year-old comrade who never minces words and is famous for making statements with a straight face has been pressing hard against all forms of communalism and threats to the secular fabric of Kerala.

It is perhaps his government’s position against controversial laws such as the Citizenship Amendment Act that has proved to be a magnet for people from the minority communities, especially Muslims.

Burqa-clad women have been making a clear statement on their changed political leanings right from the local council elections last year. Their numbers have only grown at LDF events.

“We have already passed a resolution against the implementation of the CAA. But I heard a senior BJP leader saying the Centre would implement it in Kerala also. Let me make it very clear once again, we will not allow the CAA to be implemented in Kerala,” Vijayan thundered at a public meeting at Chakkarakkal village in his constituency.

While he has been consistent in his attack against the Congress-led United Democratic Front and the BJP during the course of the campaign, Vijayan has been emphasising on secularism.

“Small and large organisations fighting for secularism are closely watching the election in Kerala since the LDF government has always stood for secularism and equality,” he said, assuring the gathering, among them a good number of Muslim women, that the LDF would defeat fascist forces.

“We need to realise that fascist forces are out to destroy secularism in our country. History shows us that fascist forces first target one group and then attack everyone else. We can now see it in Myanmar where the majority community initially thought only the Rohingya were victimised. But now the regime is after the majority community as well,” Vijayan cautioned the audience listening in rapt attention.

In what could be his last election, by his own admission, Vijayan has definitely made a statement wherever he has gone. A few thousands, including a large number of Muslim women, braved the blazing sun at the Ayikkara fishing harbour in Kannur on Monday, hours before Vijayan arrived.

The LDF has virtually accorded cult status to Vijayan, featuring only him in posters and other publicity material across the state. While the respective LDF candidates figure in some of the materials, posters and banners describe Vijayan as “Captain”. 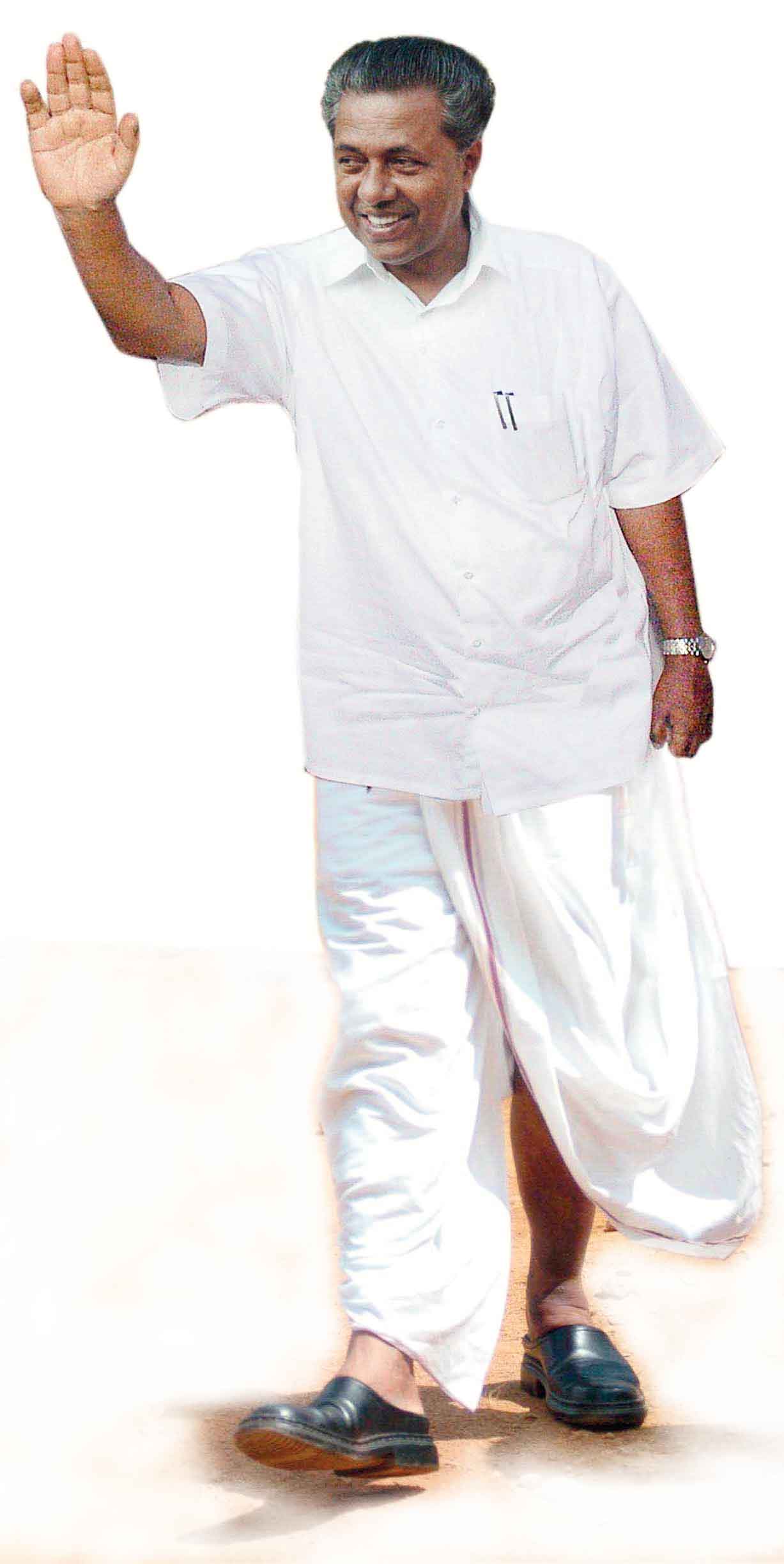 The group editor of the Madhyamam daily and Media One channel, O. Abdurahman, said the LDF had never projected an individual like this. “There is an impression that Vijayan has been accorded cult status. Even V.S. (Achuthanandan) was not given excess importance although he was a very popular chief minister.”

“On the one hand the CPM has preferred young blood over senior leaders like Thomas Isaac, G. Sudhakaran and E.P. Jayarajan, and on the other the party is projecting only Vijayan in a move no party should follow in a democracy,” he added.

But voters in Dharmadam seem to have accepted the new phenomenon. “Vijayan has led from the front in all crises and is therefore the main campaigner for the LDF,” said Rasheed P.P., a driver.

Vijayan’s role in handling two years of floods that coincided with two outbreaks of the deadly Nipah virus, a cyclone that battered much of the Kerala coast, and the Covid-19 pandemic have won him and his government accolades.

The public sentiments that welcome him are similar in other parts of the state where he has attracted massive crowds. Even the coarseness that has developed in his voice due to continuous campaigning in the hot and humid conditions, and the significant stoop owing to age, have not managed to make him take the back seat.

The biggest vote catcher of the LDF, Vijayan has been consistently slamming his main rival, the Congress-helmed UDF, and the BJP that is trying to increase its presence in the Assembly from the one seat it won in 2016.

Vijayan is not one to get complacent about pollsters forecasting a second consecutive term for the LDF, a rarity in the state that has always alternated between the Left and the Congress, and putting him way ahead in the preference list for potential chief ministers. In fact, he has urged CPM cadres to simply ignore the projections and even the visits of Congress leaders Rahul Gandhi and Priyanka Gandhi Vadra and instead engage in grassroots contact programmes to enhance the chances of the LDF.

While the Congress and the BJP are raking up the gold smuggling case that roiled the LDF government and led to the arrest of Vijayan’s secretary M. Sivasankar, the issue doesn’t seem to have any significant impact in Dharmadam.