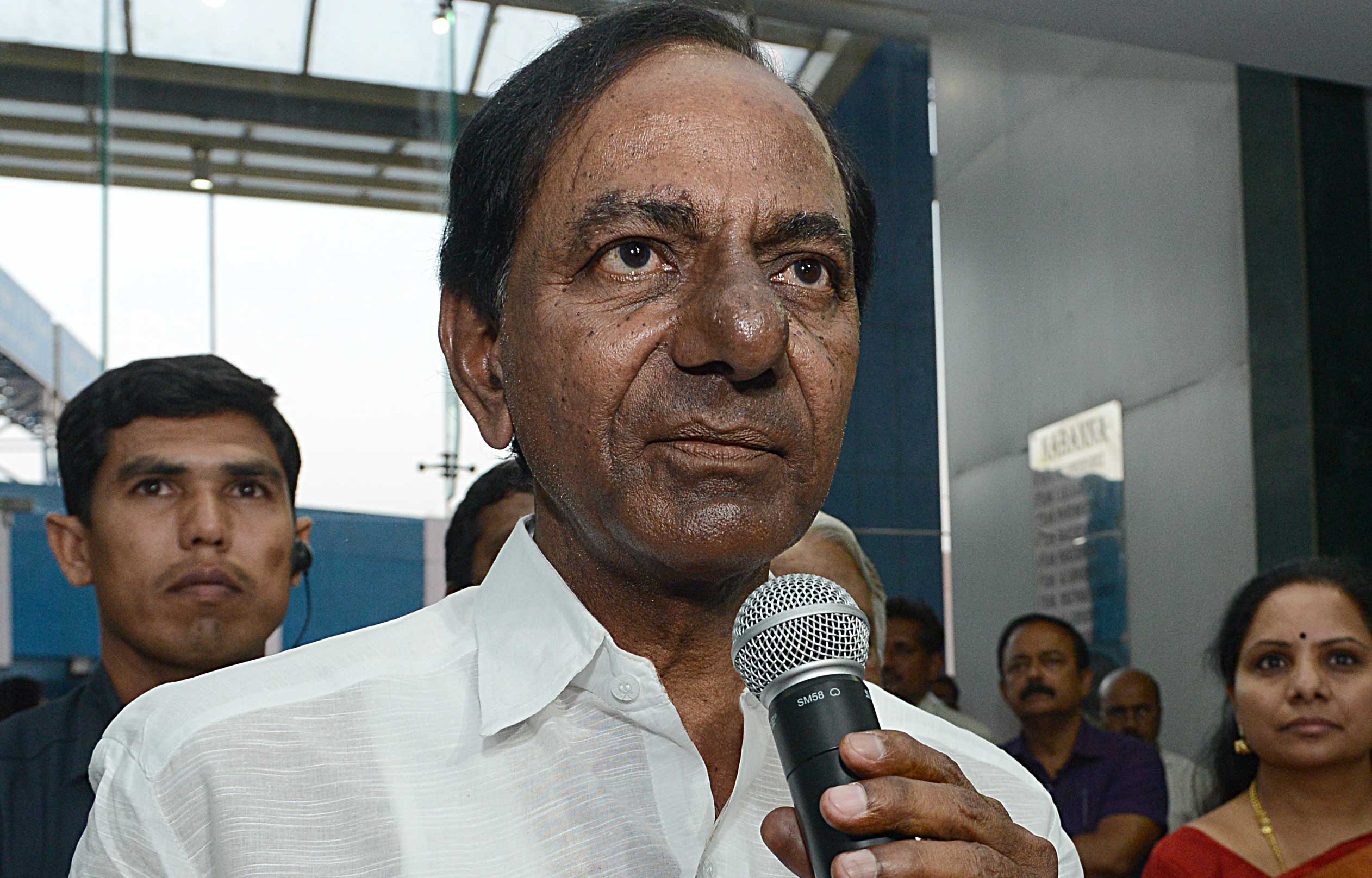 Massive hoardings of Telangana chief minister K. Chandrashekhar Rao can be seen almost every 100 metres in Hyderabad, sometimes one facing another.

Most blue-collar voters — drivers, street vendors, sweepers — swear by the 24-hour uninterrupted power, improved water supply and the 56 welfare schemes run by “KCR”, which include pensions for seven different categories of people and doles for marriages.

The only party vying with Rao’s Telangana Rashtra Samiti (TRS) for visibility ahead of the December 7 Assembly elections — Telangana’s first since the state’s birth in June 2014 — is the All India Majlis-e-Ittehadul Muslimeen. This is so at least in the seven seats the MIM holds in the Old City, where the two parties are said to be in a “friendly fight”.

The BJP, which holds four of Hyderabad’s 15 seats, is on a sticky wicket, with even many of its supporters blaming the demonetisation for most of their woes. The TRS holds four seats in the city and the Congress has none.

Auto driver Amjad Khan answers to the popular stereotype about a Hyderabadi: he can forgo a ride if a friend calls him for tea (a chat over tea is the Old City’s favourite pastime).

He admits to having always voted for the kite — the poll symbol of the MIM, led by Asaduddin Owaisi — but is full of praise for the chief minister.

“My father and grandfather used to vote for the Salar-e-Millat (literally, ‘commander of the community’, an honorific for Asaduddin’s father Salahuddin Owaisi). But KCR has changed the face of Hyderabad by building drains and water pipes,” Amjad says.

“He gives Rs Rs 1,00,116 lakh for girls’ weddings under the Shaadi Mubarak scheme. Even your worst enemy will be indebted to you if you fund his daughter’s marriage. I’m voting MIM because of the ‘setting’, otherwise how could I not have voted for the TRS?”

The “setting” is an open secret. Everyone this reporter met, even the workers of the two parties, accept that the TRS and the MIM are in an unofficial alliance, although the ruling party is contesting all 119 seats in the state. Owaisi’s party is contesting eight.

The Congress alleges that the BJP is a lesser-known partner in the “setting”. But what the BJP is most visibly yoked to is the albatross of the demonetisation.

Bookings are down by a third at the marriage hall owned by Abu Irfan (literally, “father of Irfan” —an Old City way of avoiding revealing one’s real name). Half his staff have been sacked. Those that remain haven’t got a raise since “Modi ka qayamat” (the disaster wrought by Narendra Modi).

“The demonetisation hit us worse than we had expected, and we never recovered,” Abu said. “Then the GST came, which means that I simply can’t call up a supplier in Mumbai and say, ‘Bring this’ or ‘Bring that’. We both need to have GST numbers and hire accountants.”

Point-of-sale machines are rare in the Old City, and few shops hand out receipts. Many religious Muslims shun banks because of the Quranic stricture against interest on wealth.

He has canvassed for former Congress chief ministers Kiran Kumar Reddy and Y.S.R. Rajashekhar Reddy. None from the MIM make it to his list.

“Today, most Muslims in Hyderabad are migrants from Karnataka and Maharashtra, who vote for the MIM out of gratitude to the party for absorbing them into the slums and getting them menial jobs,” Abu said.

“Native Hyderabadis like me are divided between the Congress and the MIM. Under KCR, there is peace in the city and power all day long, which I have never seen before.”

Hyderabad district has a 43.45 per cent Muslim population, concentrated in the Old City.

Chemist Dayanand and cobbler Om Prakash echoed Abu’s sentiments on the demonetisation and “peace in the city”.

Dayanand will be voting for the Congress, and Prakash says he won’t be supporting the MIM, TRS or the BJP.

Like Abu and Amjad, they both detest the MLA from Ghoshamahal, T. Raja Singh of the BJP who is known for his communal remarks, although Prakash had voted BJP in the last Assembly and Lok Sabha elections.

Prakash aired a common complaint — that local people are not getting government jobs even after the formation of Telangana — and blamed it on corruption. It’s one of the issues working against the chief minister. “My business partner’s son has a BTech, yet he can’t clear a police constable’s (recruitment) exam,” he said.

“There are central and state schemes for us Dalits to secure business loans, but instead of quick loan sanctions all we get is the Shaadi Mubarak dole. Under the Congress, at least business boomed.”

Dayanand said: “The BJP may champion the cause of us Hindus here (in Muslim-majority Nampally constituency), but they only worsen the relations between communities and don’t know anything about the economy.”

From hooch dens in the slums to the cyber city’s swank malls, the debate is about who has benefited from KCR’s schemes and who hasn’t, and whether doles are the best way forward.

Shrikant, a BJP worker in Chandrayangutta, where the party has fielded its women’s leader Syed Shahezadi against Owaisi’s brother Akbaruddin, hit out at the ruling party.

“The TRS only cares for Dalits and Muslims. We backward classes have got nothing,” he said.

“This ‘setting’ with the MIM may work, but we are with the BJP because we want change, we want jobs and loans to start businesses — like buying a car and driving it for Uber.”

The TRS has promised reservations for Muslims and a bigger quota for the Scheduled Tribes, while the Congress has been wooing the backward castes.

In the newer parts of the city, acrimony between local people and the settlers from Andhra Pradesh is not as much of an issue as it was on the eve of the state’s formation.

The Telugu Desam Party won three seats in the yet-to-be-born Telangana in the 2014 Assembly polls in undivided Andhra Pradesh, but was wiped out in the municipal polls in 2016. Desam founder N.T. Rama Rao’s granddaughter Nandamuri Suhasini is contesting from Kukatpally this time.

Vasu S, a cinematographer, is from Visakhapatnam in Andhra and is married to a Telangana native.

“My identity as a coastal Andhra guy doesn’t dictate my voting choice,” alluding to the conventional wisdom that coastal people favour the Desam and dislike the TRS.

“The TRS has given unhindered electricity and water. The police give easy clearances for outdoor shoots. Who else should I vote for?” he said.

On backfoot in Telangana, Cong fields Azharuddin at last minute