The trial in the rape-and-murder case of an eight-year-old girl in Kathua began here on Thursday with seven of the eight accused being produced before the district and sessions judge after the Supreme Court shifted the hearing outside Jammu and Kashmir. 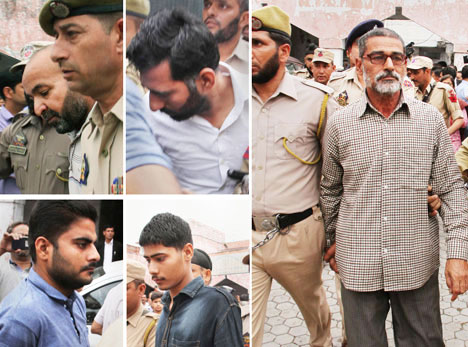 Pathankot (Punjab), May 31 (PTI): The trial in the rape-and-murder case of an eight-year-old girl in Kathua began here on Thursday with seven of the eight accused being produced before the district and sessions judge after the Supreme Court shifted the hearing outside Jammu and Kashmir.

After hearing arguments and counter arguments, the court asked the prosecution to submit translated copies of charge sheet, statements and case diaries of the case from Urdu to English to everybody, including the defence lawyers, by June 4.

A thick security blanket was thrown over the four-storey court complex as the battery of 31 lawyers representing the defence and the three-member prosecution team, led by S.S. Basra from Gurdaspur, faced off against each other.

The seven accused in the case of the rape and murder of an eight-year-old girl from a minority nomadic community in January were brought in a police bus to the judicial court complex on the old Pathankot-Delhi highway around 10.40am, and presented before District and Sessions Judge Tejwinder Singh about 50 minutes later.

The eighth accused in the case is a juvenile.

According to the Pathankot Bar Association president Reshpaul Thakur, such a high profile case was being heard in the Pathankot court for the first time.

The trial in the case is being held according to provisions of the Ranbir Penal Code, which is applicable in Jammu and Kashmir.

The main complainant is the uncle of the child. He is also her biological father as he had given her to his brother for adoption.

The case was transferred by the Supreme Court from Jammu and Kashmir to Pathankot in Punjab for a fair trial following a plea by the victim's family.

The Supreme Court had asked the district and sessions judge in Pathankot to personally undertake the trial proceedings and not assign it to other session judges, stating that it would monitor the progress of trial in the case and no other courts should entertain any other plea related to the matter.

While transferring the case from Kathua to Pathankot, about 30km away, the apex court directed day-to-day in-camera trial in the case.

The police has said the evidence on the juvenile and the others is the same and his trial should also be held in Pathankot.

According to the 15-page charge sheet, the eight-year-old girl, who was kidnapped on January 10 this year, was allegedly raped in captivity in a small village temple in Kathua district. She was kept sedated for four days before being bludgeoned to death.

The abduction, rape and killing of the child was part of a carefully planned strategy to remove the minority nomadic community from the area, it said.

The others arrested in the case are the juvenile's friend Parvesh Kumar alias Mannu as well as head constable Tilak Raj and sub-inspector Anand Dutta.

The case became a bone of contention between the state government's alliance partners, the People’s Democratic Party and the Bharatiya Janata Party. The saffron party had to sack two of its ministers — Chowdhury Lal Singh and Chander Prakash Ganga — for participating in a rally of the 'Hindu Ekta Manch' in support of the accused.