Advertisement
Home / India / Kashmir went silent on my phone, my email, my WhatsApp

Kashmir went silent on my phone, my email, my WhatsApp

Till there are media persons and organisations which have the courage to swim against the tide, the core values of journalism will remain alive 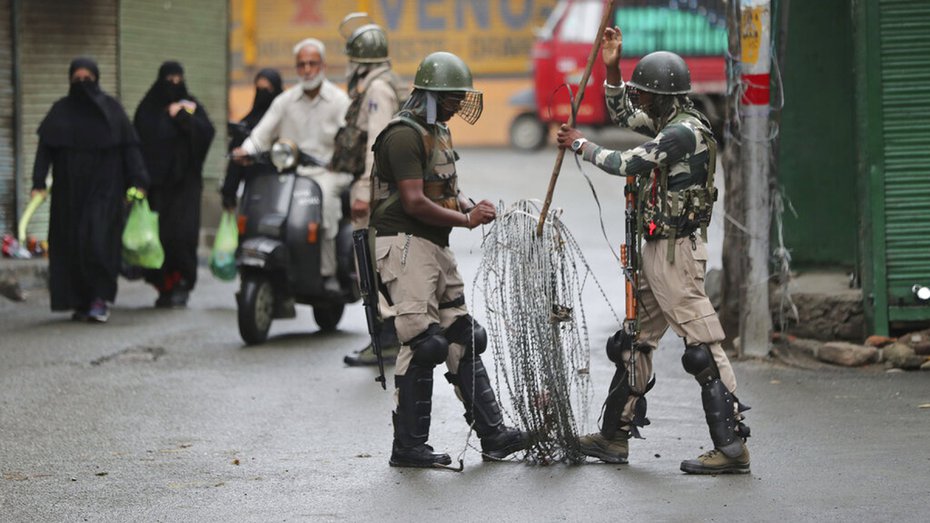 Amidst the deepening crisis in Kashmir and clampdown on communication, information and the media, there is still hope. The brave efforts of some journalists who have enabled us to take a peek into the horrifying ground reality are not trivial, although they pale in comparison to the propaganda channels labouring to project a “happy Valley” under complete lockdown.

As yet one doesn’t even know enough about the daily reality of Kashmir which is in the throes of its worst ever crisis after the scrapping of Jammu and Kashmir’s special status and the reorganisation of the state into two Union Territories. Torn between State-chaperoned chopper-flying journalists, who have happily turned themselves into extensions of the government’s media publicity department on one side, and independently working Indian media persons who have brought back stories from Kashmir on the other, Kashmiri journalists and Kashmir-based media are mostly missing. For them, it is extremely difficult to give voice to their stories, though some of them have managed to make feeble but courageous efforts to break the silence.

Hamstrung by poor resources, an information black hole and a continuously intimidating atmosphere, the period since August 5 remains the most challenging ever for Kashmir-based media. It has already walked the razor’s edge through three decades of conflict, negotiating physical threats from State and non-State actors as well as dealing with arm-twisting tactics of the government including attempts to block revenue and information. The information siege since August 5 is, however, unprecedented. The first two weeks in particular, Kashmiris had been pushed behind the iron curtain with only the resonance of a deafening silence in the air. Kashmir-based reporters, including our entire bureau, remained untraceable. Anxieties about what was going on and the inability to publish the Srinagar edition of Kashmir Times intermingled with worries about the very well-being of our staffers. Kashmir went silent on my phone which buzzes round the clock with calls from our bureau office, my email inbox, which is usually flooded with their messages and reports and WhatsApp, which is active with frequent back and forth messaging. All of that ended abruptly on August 5. It wasn’t just our Kashmir edition that was silenced, the Jammu edition too had no authenticated stories from Kashmir. We were left to rely on tidbits of information appearing in various national and international publications and we took to compiling news by quoting these reports.

Such a prolonged silence from Kashmir’s media also invoked fear and apprehension about the prospects of the future of free and independent media. It were these compelling reasons that prompted me to approach the top court of the country with an appeal to lift the curbs and restrictions on media in Kashmir Valley. As a media professional, as one of the senior-most editors of Kashmir Times, the move was a call to duty.

The media’s job is to inform public — to highlight not only the functioning of the government but also bring to the public domain the issues of the ordinary people. In a functional democracy, media becomes a connector between the rulers and the ruled, the haves and the have-nots, by speaking truth to power and by giving voice to the marginalised and suppressed. Kashmir Times has been one of the many institutions in the country, not to forget the small battles waged by lonely individuals, that have endeavoured to uphold these values of professional journalism.

Today’s challenge is just another phase in the 65-year-old journey of Kashmir Times. The oldest English newspaper in the state, Kashmir Times began publishing in 1954 as a weekly; by 1971 the venture was converted into a daily. Its founder editor, Ved Bhasin, (my father) has been the inspiring force that kept the organisation struggling against many odds while adhering to the foundational principles and ethics of journalism. Protecting constitutional democracy and humanism, in accordance with Ved Bhasin’s vision of an egalitarian, just, peaceful and democratic society, have been its core since its inception.

For decades, the newspaper remained a personification of the values espoused by Ved Bhasin, the man deemed an institution in himself. Having had a three-decade stint in active politics from his student days — pre-Partition to 1977 — his immense work for communal harmony, peace, promoting art and culture, as well as journalism were simultaneous projects. His life and work left an indelible impact on every sphere of life in Jammu and Kashmir.

His career in journalism began with the publication Tawi before Independence, when he was still in college. During the communal violence that broke out in Jammu in 1947, he worked for Hindu-Muslim amity as part of the students group, of which noted civil liberties activist and writer Balraj Puri was also a part. The effort, in particular, was to protect the Muslims of Jammu from massacres at the hands of Right-wing organisations like the RSS, which he believed were patronised by the then monarch’s administration. At that time, Governor Chet Ram Chopra, his close relative, had warned him that he would be arrested if he continued working for the Hindu-Muslim unity. The threat did not daunt him.

After his postgraduation in 1950, he worked for several newspapers and also as Radio Kashmir correspondent but his services were terminated in 1953 because he opposed the arrest and deposition of Sheikh Abdullah. In 1952, he started his first newspaper, an Urdu weekly called Naya Samaj, which was critical of both the establishment and the Praja Parishad movement that had raised the “Ek Pradhan, Ek Vidhan, Ek Nishan” demand. Naya Samaj exposed the real character of the movement as one sponsored by the RSS. In 1954, Naya Samaj was banned, under the Defence of India rules because the paper opposed Sheikh Abdullah’s undemocratic deposition and arrest. He was also expelled from the general council of the National Conference.

Kashmir Times was born the same year, as a weekly published from Delhi, where its declaration was filed. But the state banned the entry of its first issue under the then Customs Act and seized all copies in Lakhanpur. The government of the day was so hostile to him that it did not allow him to get any newspaper registered in Srinagar, making the rules ultra-stringent for him. A trusted friend’s father came to the rescue and the original declaration was filed in his name from Jammu.

In 1971, Kashmir Times was converted to a full-fledged daily and began to grow in popularity, stature and quality in the late 70s and 80s. It was the first newspaper to break the story of Maqbool Butt’s hanging in Tihar jail in 1984. For its consistent criticism of the wrong-doings of the successive governments, the newspaper became exceptionally popular in Kashmir. At that time, the Srinagar edition was yet to come and the newspaper was sent daily from Jammu to the Valley by road or by the Indian Airlines cargo. It would reach late afternoon or evening but its avid readers would wait for it; its circulation grew as it was considered the most credible source of information.

The journey, however, was rough. Limited resources were not the only hurdles. Facing up to threats, intimidations and attacks by State and non-State actors remained a continuing battle, the deepening conflict in the Valley making the matters worse. In the summer of 1983, a mob of Hindu Right-wing groups led by BJP leaders attacked the Kashmir Times offices and Ved Bhasin survived a murderous assault as the mob attacked him with lathis; sharp-edged weapons and typewriters were flung at him. The publication had been critical of the BJP and the latter blamed the paper for its electoral debacle in the 1983 Assembly elections. The mob included several leading lights of the BJP, including the then sitting legislator, Chaman Lal Gupta, who later won parliamentary elections twice from Udhampur-Doda, and Ashok Khajuria, who later became a legislator in the 1990s.

After the militant troubles began in 1989, Kashmir Times bore the brunt of the State and the extremists both in the Valley and Jammu regions. The paper’s circulation was banned by several militant groups for a few days. The Kashmir bureau operated under severe stress and strain as staffers were routinely harassed, threatened and beaten by both the security forces and the militant groups. In Jammu, the paper was banned in 1992 by a fringe Shiv Sena group that would attack hawkers every morning and would burn the newspapers. In 2008, during the Amarnath land row, its reporters were harassed by mobs; and the office received threatening phone calls and was again attacked by Right-wing mobs; but the police intervened in time.

While physical threats gradually reduced, the State resorted to more subtle methods of coercion. For instance, in 2010, DAVP advertisements were abruptly stopped and that remains the case till today. That forced the publication to go in for drastic austerity measures, which meant cutting down on staff, ultimately impacting the quality of its reportage and its circulation. But Kashmir Times continued to adhere to its traditional motto of maintaining its independence. Owing to the cash crunch, however, the Hindi and Dogri editions of the paper were finally stopped in 2018.

In the present circumstances, the hopes of survival have further dimmed but the fight is on, as our Kashmir Times team tries to follow the principles and ideas espoused by its founding father to the best of its abilities. In bleak times, when a paranoid State has begun cracking down on every media organisation and professional for speaking the truth, not only in Kashmir but elsewhere in the country as well, organisations like Kashmir Times face the threat of closure. Whether or not we survive for long, till there are media persons and organisations which have the courage to swim against the tide, the core values of professional journalism will remain alive.

As the revolutionary Urdu poet, Faiz Ahmed Faiz, wrote, the torch of truth-telling must not extinguish:

Speak — your lips are free.
Speak — your tongue and your upright body are still yours.
Speak — your life is still yours.
Look — in the blacksmith’s shop,
The flames soar and the iron is red-hot.
Look — the mouths of the locks are beginning to open,
The links of the chains are coming undone.
Speak — the little time before your body and tongue give out is enough.
Speak — truth is still alive.
Speak — say whatever you wish you’d said.

The writer is executive editor of Kashmir Times; she has petitioned the Supreme Court against the communication and information blockade in Jammu and Kashmir since August 5

Lancet does what Indian media won’t