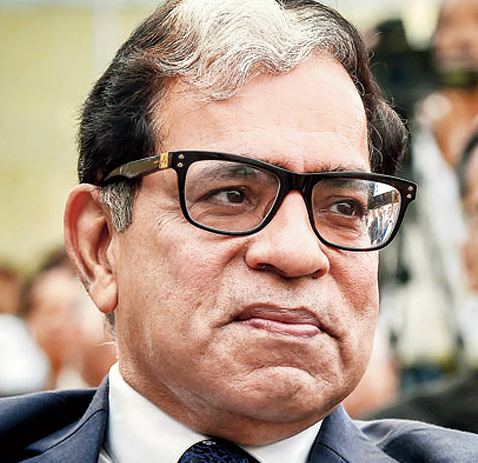 Justice A.K. Sikri, the second senior-most Supreme Court judge whose stand tilted the balance in the removal of Alok Verma as CBI director, has withdrawn his consent to a post-retirement post, sources close to the judge told The Telegraph on Sunday evening.

“Justice Sikri withdrew his consent on Sunday after informing the Chief Justice of India and the Union law minister. The decision was taken to avoid any unwanted criticism following some adverse reports over the said appointment,” a source said. Justice Sikri is to retire in the first week of March.

The sources spoke after a report in the news portal Print said the Narendra Modi government had decided last month to nominate Justice Sikri to the post of president/member in the London-based Commonwealth Secretariat Arbitral Tribunal (CSAT).

The report triggered a debate on social media with the opinions split between whether Justice Sikri, after the government made the offer, should have taken part in last week’s selection committee meeting where it was decided to replace Verma and whether aspersions should be cast and inferences drawn on the basis of conjecture.

Questions were also asked about the ethical propriety of governments offering post-retirement posts to sitting judges and why a cooling-off period after retirement should not be put in place before such nominations are made and accepted.

A more immediate issue is the danger of letting the controversy about the CBI purge fester, with silence and inaction — supplemented by an unattributed campaign to discredit Verma — marking the responses in the highest places. The onus of coming up with a convincing response rests solely with the Prime Minister as judges usually do not comment in public and the Opposition leader, Mallikarjun Kharge, has already recorded his views in a note that has become public.

The wall of silence has not been able to shut out uncomfortable questions which take a life of their own and feed on speculation and innuendo in the absence of a robust response from the executive leadership.

So was the case on Sunday when the news of the post-retirement post of Justice Sikri broke, with many leaping to the usual conclusions associated with such issues.

The Commonwealth Secretariat is the main intergovernmental agency of the Commonwealth. The tribunal to which the judge was nominated deals with disputes related to those who enter into contracts with the secretariat.

The sources close to the judge said the appointment was temporary and did not carry any salary, benefits or perks. There will be only one or two arbitration hearings in a year, the sources said. “Yet, in order to maintain the highest standards, Justice Sikri decided to bow out of the post,” one of the sources said.

Justice Usha Mehra, a former member of the tribunal, said no salary is paid for the post that has a four-year term, with one extension possible. Members go to London to hear cases and a travel allowance is paid, she added.

An official said the profile of the Commonwealth post is not as high as that in the International Court of Justice.

The sources close to the judge added that Justice Sikri had last year authored the Aadhaar judgment that upheld the right to privacy and ordered the floor test in the Karnataka Assembly that effectively hit the BJP’s plans. These cases were cited as evidence of the judge’s neutrality.

That the situation in the country has reached such a stage requiring such testimonies underscores the urgency of bringing transparency on the upheaval convulsing the CBI and other institutions.

A widespread perception, aired by even respected former judges, exists that the principles of natural justice were not followed when Verma was removed by a 2:1 decision.

Justice Sikri’s vote had become the deciding factor as the stands of the other two members in the selection committee, Prime Minister Narendra Modi and Congress leader Kharge, were already known. The Prime Minister and Justice Sikri favoured Verma’s removal while Kharge dissented.

However, with question after question being asked and damaging accounts spilling out daily, the response so far from the government has been to brazen it out. Instead of addressing the grave issues being raised, malicious reports are being planted to question the integrity of Verma. The key charges against Verma have so far not yielded any incontrovertible proof and can achieve closure only through an independent probe, pending which he is presumed innocent.

The core issue is not Verma but whether the principles of natural justice were observed when the committee removed the head of the CBI in an unparalleled decision and whether the head-spinning haste was warranted.

So far, Prime Minister Modi has confined himself to saying that his cooperation with investigative agencies that were probing him when he was chief minister proved his respect for institutions. He has avoided explaining the reason for the haste and answering the numerous other questions swirling around the CBI director’s removal. Congress leader Rahul Gandhi tweeted on Sunday: “When the scales of justice are tampered with, anarchy reigns. This PM will stop at nothing, stoop to anything & destroy everything, to cover up the #RafaleScam. He’s driven by fear. It’s this fear that is making him corrupt & destroy key institutions.”