Remarks come in the context of a letter from Kiren Rijiju to CJI Chandrachud, urging the collegium to grant the Centre a role in appointments and transfers in the higher judiciary 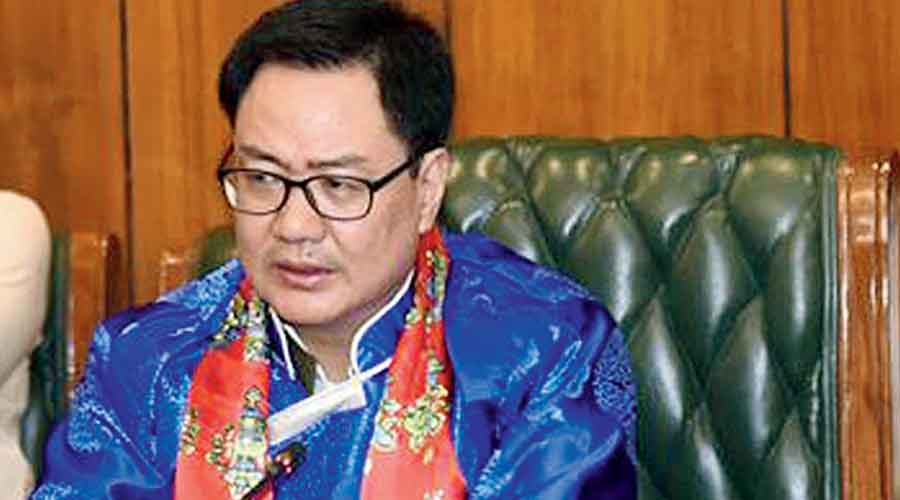 The Supreme Court collegium will not brook any “political” interference in the appointments of apex court and high court judges, highly placed sources have told The Telegraph amid repeated attempts by the NDA government to wrest a role for itself in the appointments process.

“Once a five-judge constitution bench has quashed (in 2015) the National Judicial Appointments Commission (NJAC) as unconstitutional, there is no question of the Supreme Court taking any administrative action to undo the judicial verdict,” one of the sources said.

“Any expectation about a highly placed body like the collegium resorting to such measures smacks of the person’s lack of elementary understanding of the functioning of the judiciary,” another source added. The sources sought anonymity, which they said would enable them to articulate their views without being seen as confrontational.

The remarks came in the context of a January 6 letter from Union law minister Kiren Rijiju to Chief Justice of India D.Y. Chandrachud, urging the collegium to grant the Centre a role in appointments and transfers in the higher judiciary.

“The letter is nothing new but a reiteration of the central government’s view that the MoP (memorandum of procedure governing judicial appointments and transfers) should be modified to give the executive a say,” a source said.

The sources said similar letters had been written in 2014, 2016, 2017, 2018 and 2019, too, demanding the government have a “representative” in a joint “search committee” formed and supervised by the CJI. Some of the letters came from Rijiju’s predecessor Ravi Shankar Prasad.

Rijiju’s letter seeks a similar mechanism for the high courts too, with their collegiums “guided” by a “search committee” that will recommend appointments and transfers, the sources said.

Under the MoP, the collegium — made up of the five senior-most judges — recommends judicial appointments and transfers, with the government allowed only one request for reconsideration and bound by rule to approve a recommendation once it is reiterated.

Over the past few months, Rijiju has publicly attacked the collegium system as opaque and too political, and suggested the apex court had been wrong to strike down the NJAC, which gave the government a say in judicial appointments. This had prompted Justice Chandrachud to publicly defend the collegium system.

Sources suggested that Rijiju’s letter had been timed deliberately for January 6, the day an apex court bench had listed a contempt petition against the Union law secretary over the Centre’s failure to clear several recommendations despite multiple iterations by the collegiums.

On January 6, the bench of Justices Sanjay Kishan Kaul and A.S. Oka had questioned attorney-general R. Venkataramani on the delays in clearing recommendations as well as the Centre’s unprecedented move of sending its own recommendations for judicial appointments.

Earlier, on December 8, the apex court had suggested the Centre was deliberately delaying approvals out of anger at the top court’s quashing of the NJAC.

“Speeches made by the high constitutional functionaries in public, making comments on the Supreme Court collegium, are not very well taken. You have to advise them,” the court had told solicitor-general Tushar Mehta.

The court did not mention names. However, days earlier, Vice-President and Rajya Sabha Chairperson Jagdeep Dhankhar had in an address in the House assailed the collegium system, following up on Rijiju’s attacks.

The NJAC gave the Union law minister and “two eminent persons” membership of a committee, along with the CJI and the next two senior-most Supreme Court judges, that would recommend judicial appointments and transfers.

Its quashing by the apex court has led to constant friction with the NDA government over who has primacy in judicial appointments: the judiciary itself or the executive. Three constitution benches upheld the primacy of the collegium in 1993 (seven judges), 1998 (nine judges) and 2015 (five judges).

However, the Centre has flagged observations by a two-judge bench in a 2017 judgment that called for a relook at the MoP to make the process more transparent and acceptable. The July 4, 2017, judgment by the bench of Justices J. Chelameshwar and Ranjan Gogoi (both now retired) in the Justice C.S. Karnan case had cited the collegium system’s failure to appropriately assess the personality of the judge while recommending his elevation.

To evolve an “appropriate mechanism” to assess the personality of candidate judges, the bench had recommended a debate among “the Bar, the Bench, the State and civil society”.